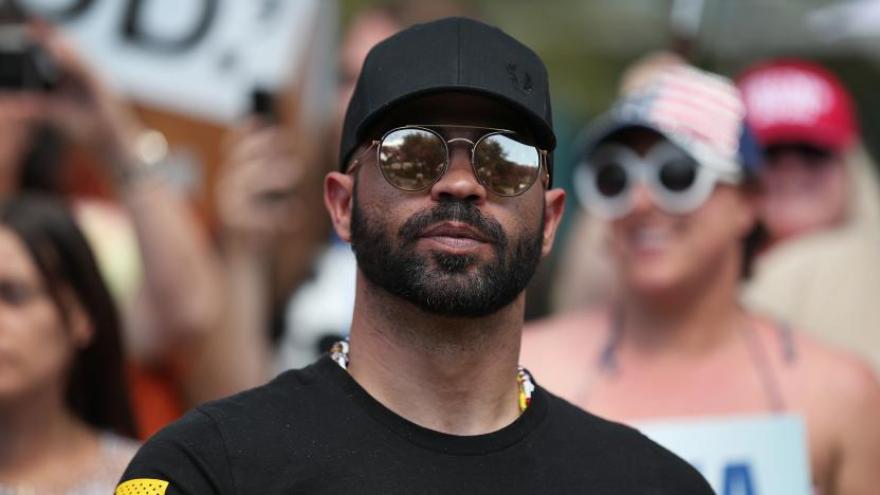 Enrique Tarrio, leader of the Proud Boys, stands outside of the Hyatt Regency where the Conservative Political Action Conference was being held on February 27, 2021, in Orlando, Florida.

(CNN) -- The Justice Department on Monday charged the head of the Proud Boys, Enrique Tarrio, and four other leaders with seditious conspiracy in the January 6 US Capitol attack, escalating the criminal case against the far-right extremist group.

These are the most aggressive charges brought by the Justice Department against the Proud Boys, and are the first allegations by prosecutors that the group tried to oppose by force the presidential transfer of power.

Tarrio and his co-defendants previously pleaded not guilty to an earlier slate of charges.

The new indictment adds fresh details about what Proud Boys leaders said on January 6, 2021. Prosecutors accuse the five defendants of working together to intimidate members of Congress and law enforcement and prompt them to flee, thereby preventing them from performing their official duties.

Prosecutors revealed Tarrio's text messages from January 6, where he appears to compare the attack on the US Capitol to "The Winter Palace" -- the home of the Russian emperor, which was stormed during the Russian Revolution in 1917. In the texts, Tarrio appears to comment on Congress being evacuated from the chambers, unable to certify the Electoral College vote.

An unnamed person texts Tarrio, "Dude. Did we just influence history?" prompting Tarrio to respond, "Let's first see how this plays out," before the Senate resumed certifying the presidential vote. The unnamed person writes back, "They HAVE to certify today! Or it's invalid."

The four men charged alongside Tarrio in the indictment are Ethan Nordean, the "sergeant at arms" of the Proud Boys and president of his local chapter; Joseph Biggs, a self-described organizer of Proud Boys events; Zachary Rehl, who runs the Philadelphia chapter of the Proud Boys; and Dominic Pezzola, a New York Proud Boy who goes by "Spaz."

All five were previously indicted on less serious conspiracy charges The defendants are set to be in court later this week.

Lawyers for Nordean, Rehl, Pezzola and Biggs have maintained in court that their clients had no plan when they walked to the Capitol on January 6, while Tarrio's lawyers have stressed that their client left Washington on January 5 after being arrested for burning a church's Black Lives Matter banner in December 2020.

Rehl responded to the new charge with his defense attorney, Carmen Hernandez, writing in a court filing Monday night that the new indictment "does not allege that Mr. Rehl used force at any time nor encouraged anyone to do so."

"The worst that has been alleged against Mr. Rehl is that he has associated himself with the Proud Boys, a lawful fraternal association as is his right protected by the First Amendment," Hernandez said, adding that "to bring such serious charges against Mr. Rehl at this late date without alleging a single new fact against him is simply wrong and deserves a response."

Rehl has pleaded not guilty to his previous January 6-related charges in court, and, like the others in the case, has not had the opportunity yet to respond formally in court to the sedition charge.

The latest developments come after Charles Donohoe, a Proud Boy from North Carolina, pleaded guilty in April and agreed to cooperate with the investigation. He was not named in Monday's indictment.

The Justice Department has brought one other seditious conspiracy case, the gravest charge to emerge from the Capitol attack, against the leaders of the Oath Keepers, who are accused of extensively planning and preparing for violence on January 6. Prosecutors have already secured three guilty pleas to seditious conspiracy in that case.