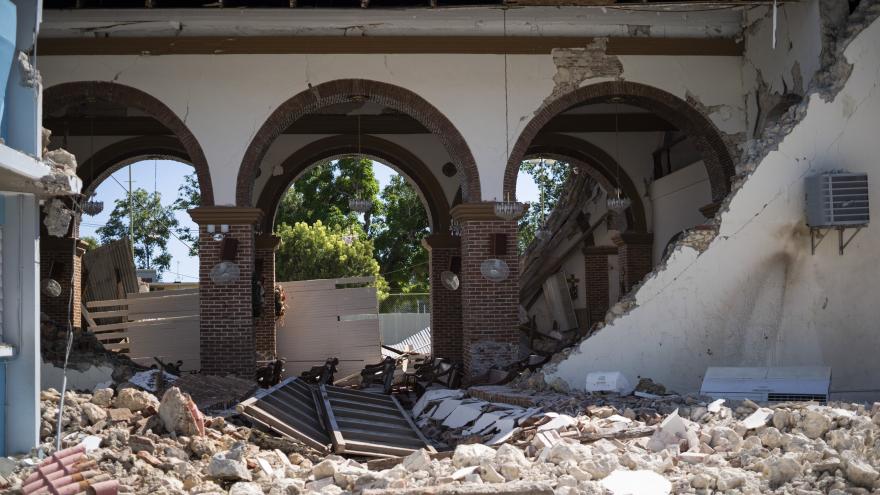 (CNN) -- Roughly two-thirds of Puerto Rico remains without electricity, many still don't have water and frightened residents were staying outside as a series of aftershocks rocked the island following a magnitude 6.4 earthquake.

The quake was the strongest and likely the most damaging of hundreds of temblors that have struck the island since December 28. It hit before dawn Tuesday, leaving a man dead and causing dozens of homes and structures to crumble.

It was centered off Puerto Rico's southern coast, 6 miles south of Indios. Gov. Wanda Vázquez Garced declared a state of emergency and activated the Puerto Rico National Guard as she pleaded with residents to remain calm and prepare for aftershocks.

Terrified of sleeping indoors as aftershocks continue, neighbors put mattresses in their front yards while others spent the night Tuesday under white tents and tarps.

Noelia de Jesus has been sleeping at an outdoors shelter with her granddaughters, terrified of returning to her Guanica home.

"I've been crying ever since it happened," de Jesus told CNN. "Everything is broken...the house is leaning to the right. If another (earthquake) comes, it's going to go down."

It's the third time that a natural disaster leaves her without a place to live. Like her, many Puerto Ricans lost their homes when Hurricane Maria hit the island two years ago and Hurricane George struck in 1998.

Guanica Mayor Santos Seda said about 50 homes were destroyed by the earthquake and at least 100 more were "about to collapse" on Wednesday.

Hundreds of aftershocks have hit the area in the past few days. As of Wednesday afternoon, the island in just 24 hours had experienced about 50 seismic events of magnitude 2.5 or higher, the US Geological Survey said.

A 4.7 earthquake was reported Wednesday afternoon off the southern coast of the island, about 8 miles southeast of Tallaboa, USGS said. The National Weather Service office in San Juan said there was no tsunami threat.

Worse than Maria, some say

Residents and officials have repeatedly said the impact from the quakes surpasses the devastation that Hurricane Maria, a Category 4 storm when it hit the island, delivered two years ago.

"With the hurricane, you knew when and at what time it would arrive," Guayanilla resident Tatiana Rodriguez, 28, said, adding of the quakes, "This, you don't know at what time it's going to happen."

The town of 18,000 located near the southern coast hasn't been getting regular updates, she said. Residents are disinclined to leave their homes because they don't know what areas are safe. Rodriguez worries that recovery will be difficult, especially for those hit hard by Maria, she said.

"There are a lot of people that started from zero because of Maria," she said. "(They're) starting again from zero."

Ashley Ramirez Perez, 22, hasn't seen her partner since Saturday. He was receiving treatment at a clinic in Guanica, about 12 miles west of Guayanilla, but patients were moved after the quakes and she doesn't know where he is. She doesn't think he knows where she is, either, she said.

Perez and her relatives, including her 58-year-old father, took shelter at Gloria Maria Borrero School in Guayanilla after Perez's apartment began "separating from the sidewalk," she said. She's been without power for two days, and the balcony of her apartment is "a bit toppled" as well, she told CNN on Tuesday.

"I never thought a quake would destroy so much," she said. "Hurricane Maria was nothing compared to this."

Water and power still an issue

Much of Puerto Rico is still without power Wednesday as engineers work to restore it in phases. About 500,000 customers, roughly one-third of the island, are back on the grid, the Electric Energy Authority said in a tweet.

"We lost the largest plant in the entire system," said Jose Ortiz, executive director of the Electric Power Authority.

Power has been restored in most hospitals, and crews are working to fully restore it by the weekend, Ortiz said. A nursing home in Ponce was evacuated and dozens of people in wheelchairs were waiting outside.

More than 200 people took shelter at a Guanica coliseum, he said, but fearful for their safety if the building were toppled, they relocated to the parking lot.

"So much worse than Maria, because a hurricane, we can tell where the hurricane is coming through, but we don't with an earthquake," Seda told CNN. "Yesterday, my wife and I slept on the sidewalk right outside my house, and we saw the same thing everywhere."

Classes have not resumed

Classes won't resume across the island until crews inspect all schools and confirm buildings are safe for students, education officials announced.

"Classes in the public school system won't resume until a total evaluation of all campuses," Education Secretary Eligio Hernández Pérez tweeted, adding that teachers and staff won't return to the schools until further notice.

The earthquakes come after Hurricane Maria devastated the US territory in September 2017. Many in southern Puerto Rico said the earthquakes' damage was worse.

"There's no warnings for this," Puerto Rico Police Commissioner Henry Escalera said of the earthquakes. "A hurricane gives us time to plan ahead."

When asked what concerns him the most about the quakes' aftermath, he said, "That homes will not be safe to live in and the possibility of a collapse that will cause a person's death or serious injuries."

The Federal Emergency Management Agency announced aid has been made available to supplement local response efforts.

Correction: This story has been updated with the correct name for Ashley Ramirez Perez.