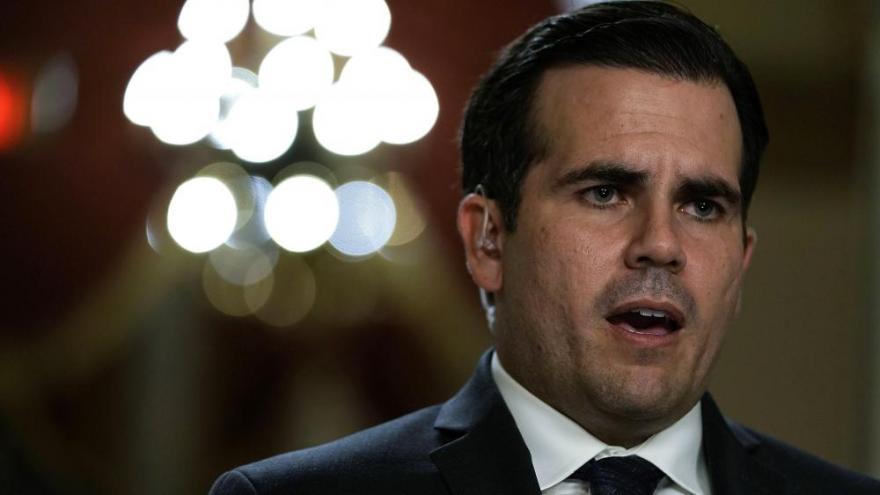 (CNN) -- Puerto Rico Gov. Ricardo Rosselló said he will step down next week after more than a week of protests calling for his resignation.

Rosselló said in a video message on Facebook that he will resign August 2, at 5 p.m. ET.

The governor had been expected to announce his resignation earlier Wednesday as lawmakers were ready to begin impeachment proceedings.

The streets of San Juan erupted into one big party as people came out to celebrate the news of Rosselló's resignation, with fireworks, drumming, music and cheering. Residente, one of the island's most famous rappers, celebrated with the crowd.

Thousands of people have jammed the streets of San Juan for days, calling for Rosselló's resignation after Puerto Rico's Center for Investigative Journalism published a series of group messages between the governor and his inner circle that included homophobic and misogynistic language and jokes about Hurricane Maria victims.

Protesters say Rosselló's resignation is only a first step in what they call an historic challenge to a political power structure long dominated by two parties.

Many Puerto Ricans have lost confidence in the governor's pro-statehood New Progressive Party and the Popular Democratic Party, which supports the current commonwealth status.

"Rosselló is a symptom of a much deeper problem," said Cynthia García Coll, a psychologist who teaches at the University of Puerto Rico at Rio Piedras.

For Rosselló's successor, it will not be business as usual on the island.

"Before people would sit and watch TV and complain or do nothing," said García Coll, who is active in a community organizing group made up mostly of artists and writers. "People are not sitting in front of their TVs anymore. That's the difference. I call it a peaceful revolution."

Earlier on Wednesday, Rep. Jose Melendez, a member of the governor's New Progressive Party said legislators were planning to begin the impeachment process if there were "illegal acts in the chats."

A team of legal experts was commissioned last week by Speaker of the House Carlos Johnny Méndez to review messages from the governor's group chat and determine whether any crimes were committed.

Edgardo Roman Espada, president of the Puerto Rico Bar Association, said the trio of experts said in a report that there was evidence of five possible crimes including, illegal misuse of public office for personal gain, embezzlement, negligence as pertaining to fulfilling the duties of public office and violations of the government ethics law.