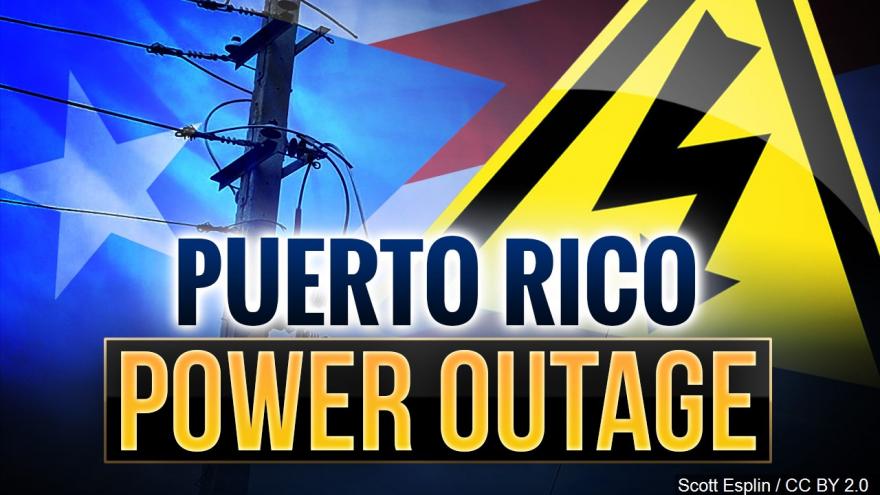 By Ray Sanchez and Leyla Santiago

(CNN) -- Puerto Rico has suffered an island-wide power outage, its power authority said Wednesday -- nearly seven months after Hurricane Maria destroyed much of the island's infrastructure and its electrical grid.

An excavator operated by Cobra Acquisitions, a contractor, apparently caused the blackout, which originated at a major transmission line running between Salinas to Guayama in the southeast, according to the authority.

Mammoth Energy, parent company of the contractor, said workers were removing a fallen tower when the machine got too close to an energized line and an electrical ground fault caused the outage.

Gov. Ricardo Rossello said in a tweet that he has suggested Puerto Rico's Electric Power Authority cancel its contract with Cobra Acquisitions.

Power was to be restored within 24 to 36 hours, the authority said.

By Wednesday afternoon, service had been restored in at least seven municipalities, five hospitals and at San Juan's airport. About 51,000 customers, out of 1.4 million, had power.

The utility said its priority was to bring back service to medical facilities, water pumping systems and financial institutions.

Video and photos posted on social media showed rapid transit line workers helping down passengers from stalled trains and college students registering for classes during the blackout. Long lines of cars formed at gas stations and a fire broke out in an electrical generator behind a restaurant in the Condado tourist district.

"Seven months after Maria, we are back where Maria left us," Cynthia Garcia Coll, a professor at Carlos Albizu University in San Juan, said via email.

Rafael Santiago, an engineer at a plant that makes prosthetic devices, said via Twitter that he and other workers were evacuated after being locked inside for about 20 minutes while electric generators were started.

The massive outage comes less than a week after a fallen tree knocked out service to 870,000 customers, about half the power authority's clients, across a broad swath of the US territory.

At the time, the authority said a major transmission line was damaged while contractors were clearing vegetation.

But the mayor said backup systems and mobile tower lights allowed Wednesday night's baseball game between the Cleveland Indians and Minnesota Twins to go on as planned at Hiram Bithorn Stadium.

"Nothing will stop us," she tweeted.

Puerto Rico, home to more than 3 million US citizens, has grappled with widespread power outages for months since Hurricane Maria devastated the Caribbean island.

Puerto Rico has lost 3.4 billion customer-hours of electricity service due to Maria, according to an analysis released last week by the economic data analytics and policy firm Rhodium Group.

It's the largest blackout in US history (in terms of customer hours) and the second largest in the world -- after the outage caused when Typhoon Haiyan tore through the Philippines in 2013, killing more than 6,000 people.

The utility canceled the contract amid public outcry, and its executive director stepped down in November.