Pulling off Tokyo 2020 will be a logistical nightmare ... and the clock is ticking 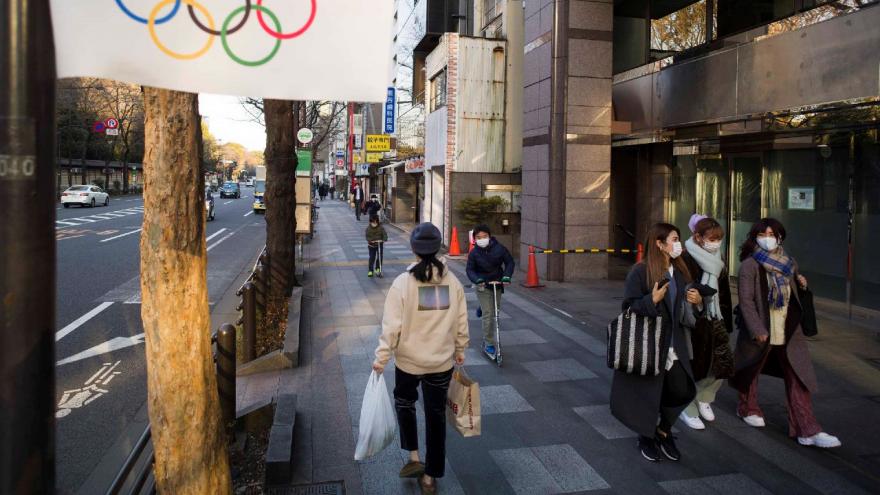 After the Covid-19 pandemic forced organizers to delay the Summer Olympics last year, the Games are now are set to begin in less than six months on July 23, and major questions remain as to how Japan plans to pull off what could prove to be the most complex sporting event ever held -- one involving more than 11,000 athletes from more than 200 countries who must be kept safe from a virus that has infected 100 million people and killed more than 2 million.

On Wednesday, the International Olympic Committee (IOC) President Thomas Bach vowed that the event would go ahead.

"Our task is to organize Olympic Games and not to cancel Olympic Games," he said, adding that the IOC is working "day and night" to host a safe event.

It may just be doable. The UFC and the NBA proved last year that it's possible to safely hold a major sporting event during the pandemic, as long as those involved are willing to make some sacrifices and get creative.UFC moved all its fights to an island in Abu Dhabi, while the NBA finished its 2019-2020 season at a campus in Disney World with stringent rules to keep the virus out. Both proved successful, but those two events pale in comparison to the Summer Olympics in terms of sheer size and complexity.

The Rio de Janeiro Games in 2016 involved 11,000 athletes from 206 different countries competing in 306 different sporting events across 37 venues, all of which needed to be meticulously prepared to meet the exacting standards required of the world's most elite athletes and the global media. More than 25,000 journalists from across the world were accredited to cover the Rio Games so fans could follow in whatever language they speak.

Organizers are now racing to determine how Tokyo can hold the event safely,especially considering much of Japan is under a state of emergency amid a third wave of infections. Authorities must figure out how to protect not only athletes but also citizens of the world's most-populous metropolitan area, a daunting task considering Japan's huge elderly population and its slower-than-expected rollout of coronavirus vaccines.

The Olympics organizing committee said in an interim report published in December that it would pursue a host of Covid-19 prevention measures for athletes and spectators, if the latter are even allowed.

The report, however, lacked specifics. It's not clear what happens if one competitor tests positive or who needs to quarantine upon arrival, or who would pay for it -- not all Olympic competitors are professional athletes with the budget for such an expense.

What is clear is that the Games will look incredibly different to Rio. From the opening ceremonies to competition itself, change is coming to most of the event, save for the name -- organizers chose to stick with the Tokyo 2020 moniker.

Dick Pound, the longest-serving member of the IOC-- and one of its most outspoken -- said he's "confident" the Games will go ahead, and puts the likelihood of that happeningat about 75%.

"I think unless some drastic changes occur, this is a manageable proposition and I hope that we're able to pull it off," Pound said, while adding a note of caution.

"There are no certainties in life and what might happen with the virus."

The first major task will be preparing for an influx of so many athletes coming from all over the world.

The Australian Open just proved how challenging that can be -- and that competition only involved about 250 players.

Australian authorities required all players to quarantine for two weeks, and most were allotted five hours each day to go out and train in strict bio-secure bubbles. However, any player whose flight to Australia was found to have a confirmed Covid-19 case had to undergo a 14-day quarantine ahead of their grand slam matches. That meant 72 players were not being allowed to leave their hotel rooms when passengers on their flight tested positive.

Some tennis stars have expressed anger and frustration at being kept cooped up ahead of the first grand slam of the tennis season, including record eight-time Australian Open men's singles winner Novak Djokovic. One player said athletes on board a charter flight were unaware of the policy, but Daniel Andrews, the Premier of the Australian state where the Open is held, said that tennis players were briefed on the rules before they came to the country.

The whole ordeal shows just how important it will be for the Tokyo 2020 organizers to formulate a plan that is clearly communicated to athletes and allows them to continue their training regimen while in quarantine. That way, Olympians are not put at a disadvantage during quarantine and can compete at a high level for an event they've likely been preparing for their entire lives.

The IOC announced in December that the Opening and Closing Ceremonies will be pared-back. A report in the Japan Times earlier this month said that 6,000 people will likely attend in the iconic opening parade at Japan National Stadium,and an Olympic official has said that participation would be limited to only athletes and a maximum of six team officials per country.

That scaled-down ceremony is in keeping with an "overall simplification of the Games."

Explaining what that could look like, Pound said: "You can certainly reduce the level of services; you can reduce the degree of hospitality that's being offered and things like that."

The IOC has said athletes should arrive no more than five days before their first day of competitionand leave no more than 48 hours after they're done competing.

Athletes, coaches, broadcasters and anyone traveling to the games are likely to face a self-quarantine period in their home nation before embarking for Japan. That will be followed by tests on arrival at the airport, and regular tests for those staying in the Athletes Village, in Tokyo, which can sleep about 18,000 people.

Competitors will be tested at least once every four days and traced throughout their stay, and having limited interaction with other people, according to the report published in December.

That means participants won't be able to go sightseeing, exploring Tokyo and take part in the notorious partying that goes on in the Olympic Village after athletes finish competing.

In fact, when athletes travel between the village and the competition and training venues they should do so by designated vehicles, wearing masks. Equipment will be introduced in this facility to "prevent the spread of droplets" according to officials.

About 4.45 million tickets have been sold domestically, and 1 million have been purchased by foreigners. Japan has offered refunds to people who could not attend the Olympics on the new dates.

Officials have said they will decide by the spring how many fans can attend -- and if that will include international arrivals. Japan's borders are currently closed to foreign nationals.

If visitors are allowed, their experience will likely be high-tech. The government is developing a contract tracing app for attendees using GPS that will reportedly link visas, proof of test results, tickets and other information, authorities said.

Visitors who show proof of a negative Covid-19 test and agree to use the contact tracing app will not need to quarantine for 2 weeks, according to local media reports.

However, according to the committee's report, a quarantine may be necessary depending on which country the person is coming from.

Publicly, Japanese and international organizers are committed to holding the Games at their delayed start. The government's Olympic Minister, Seiko Hashimoto, said Tokyo 2020 will be held in 2021 at "any cost." Prime Minister Yoshihide Suga has also vowed the Games will go ahead.

The prospect of holding the Olympics, however, has looked particularly bleak in recent weeks, due to the spike in cases. Japan has had 376,000 cases, and 5,387 people have died.

Japan's own vaccine rollout plan has gone slower than those in other developed nations, such as the US, China or the United Kingdom. The country plans to start inoculating medical workers in late February and the elderly by March. No timeline has been announced for vaccinating the rest of the population. Convincing people to get inoculated in Japan will bring its own challenges, as vaccine skepticism is widespread, driven by a history of vaccine safety scares and concerns about side effects.

Furthermore, there is growing public opposition to Japan hosting the Olympics altogether. A poll by national broadcaster NHK foud that 77% of people in Japan think the games should be canceled or further postponed.

"The government is obsessed with hosting the Olympics," said Kumiko Suto, the founder of Hangorin No Kai, an anti-Olympics group in Tokyo. "It's becoming clear during this coronavirus disaster that the Olympics would sacrifice people's lives."

But Pound, the IOC official, said another postponement may be prohibitively expensive for Japan and logistically impossible, especially considering the Beijing 2022 Winter Olympics are now about a year away.

"It will further complicate a crowded sports schedule ... you're going to have the World Cup and football going on, and at some point it's just there's just too much congestion in the overall system," said Pound.

Canceling the Games would be a major blow to Japan's pride and finances. At $25 billion, this was already going to be the most expensive Summer Olympics on record before the delay. Longtime former Prime Minister Shinzo Abe had billed the event as an opportunity to show off Japan's mighty recovery from the 2011 earthquake and tsunami and years of a stagnating economic performance.

Without the influx of tourists, Japan is unlikely to get the economic bounce from the Games that most countries enjoy. Holding the Olympics with spectators could result in an economic loss of up to $23 billion in Japan, according to Katsuhiro Miyamoto, an honorary professor at Kansai University.

But it is perhaps the athletes who have trained all their lives for this moment who have the most to lose.

"Something (like) north of 70% (of the athletes) never get to a second Olympics," Pound said. "For them, it's now or never."