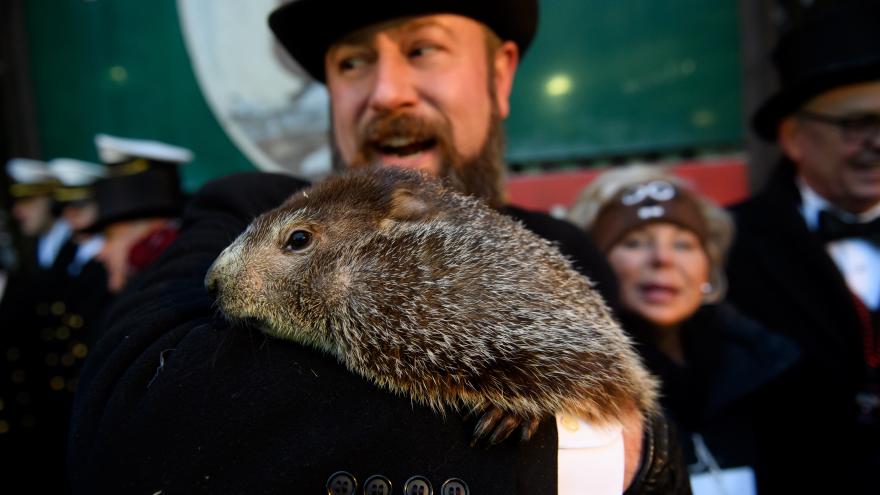 Punxsutawney Phil emerged from his burrow around 7:25 a.m. and did not see his shadow, predicting an early spring for us all.

"Now my forecast on a day that's a palindrome will cause some to cheer and some to moan. So do I hope you think it's neighborly, for there is no shadow of me, spring it'll be early, it's a certainty," a member of Phil's Inner Circle read from the groundhog's prediction scroll to the cheers and applause from the crowd.

As the legend goes, if Phil sees his shadow, he considers it an "omen" of six more weeks of bad weather and heads back into his hole. If it's cloudy and he doesn't, you can put away that winter coat sooner than expected.

But of course, his predictions aren't always correct.

The groundhog doesn't have the best track record

It's a Groundhog Day tradition that stretches back more than a century. But even though Phil has been in the weather-prediction business for more than 130 years, he doesn't have a stellar track record.

To be fair, it's a pretty tough job. Trying to predict a month and a half of weather for a country with vastly different regional climates is no small feat. Still, you'd think he'd have the hang of it by now.

In the past decade, Phil has predicted a longer winter seven times and an early spring three times. He was right about 40% of the time, according to the National Oceanic and Atmospheric Administration, which says the groundhog shows "no predictive skill."

"You're better off trying to decide what the rest of February and March will look like by flipping a coin," said CNN meteorologist Judson Jones.

But the people who know Phil best don't exactly see it that way.

A.J. Dereume, one of the groundhog's handlers, insists Phil's predictions have a 100% accuracy rate -- they just get lost in translation.

According to lore, the president of the Punxsutawney Groundhog Club is the only person who can interpret Phil's message. Every year, the groundhog sits on his tree stump and conveys his prediction to the club president, who then directs the vice president to read from a scroll that corresponds with the year's forecast.

"Phil is the one deciding whether or not he's seen the shadow," Dereume says. "It's not up to us. All we do is deliver his message."

Either way, human forecasters don't mind having the alternate prediction out there in case their own projections go askew.

"People like to have something to blame for the weather, and the groundhog is the perfect thing to blame," Jones said. "It's better than blaming your meteorologist."

Why a groundhog makes weather predictions

So, why do Americans look to a groundhog for a weather forecast?

The tradition has its roots in a Christian religious holiday called Candlemas Day, dating back to ancient times. It was celebrated midway between the winter solstice and the spring equinox.

Later, people across Europe took their candles to church on February 2 to have them blessed, believing it would bring good tidings through the winter, according to the Punxsutawney Groundhog Club.

Over time, the tradition evolved to incorporate weather. A sunny sky on February 2, superstition held, would mean a cold and stormy remainder of winter, while a cloudy sky meant a quicker warm up.

When the tradition spread to Germany, a hedgehog -- and its shadow sightings -- joined the mix. And when German settlers arrived in the colonial America, they relied on the more plentiful groundhog to do the work.

Fast-forward to 1887, when an editor of a Punxsutawney newspaper declared Phil America's official weather-predicting groundhog. Newspapers across the country picked up the story, and the tradition caught on.

We now know Phil's prediction -- but we also have our doubts. So, what do the experts say the next month or so will feel like?

It depends on where you live.

So far in January,the average temperatures have stayed above freezing in much of the United States. Snowfall has generally been low for cities in the eastern half of the country.

But last year, it was quite a different story. Americans experienced the coldest air in a generation, more than 20 people were killed, and many others were left with lasting frostbite injuries.

While things could still change in the next six weeks, forecasters say everything east of the Mississippi River Valley will see above average temperatures in the next two weeks and conditions in the western part of the country -- particularly from Las Vegas to Denver -- will be below average.

By the end of February into March, many areas in eastern US may not see much changes but people living anywhere from Arizona to Texas will see cold conditions easing quickly and temperatures warm to above average.