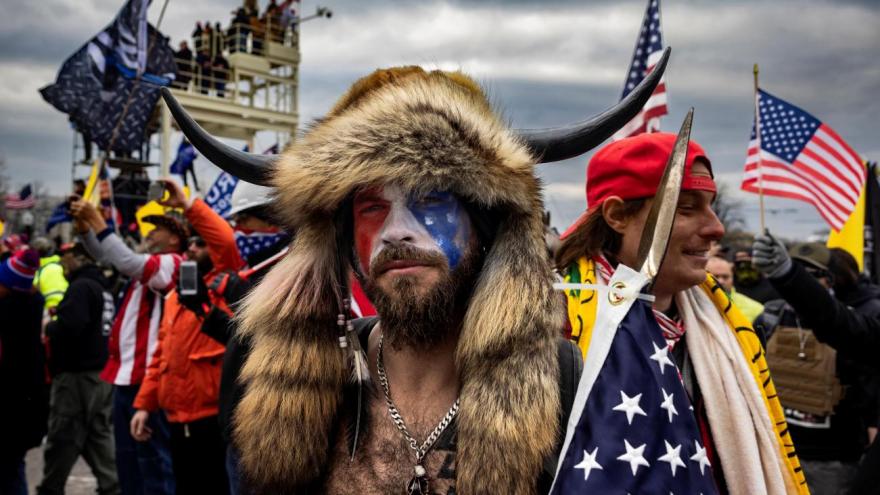 Jacob Anthony Angeli Chansley, known as the QAnon Shaman, is seen at the Capital riots on Jan. 6, 2021 in Washington.

(CNN) -- Jacob Chansley, the so-called "QAnon Shaman," was sentenced to 41 months in prison for his role in the US Capitol riot.

The Justice Department had asked for Chansley to receive a harsh sentence as a way to set an example among the January 6 rioters, and prosecutors have positioned Chansley as emblematic of a barbaric crowd.

Since then, Chansley gained fame as the "QAnon Shaman," a figure known in the fringe online movement and for widely shared photos that captured him wearing face paint and a headdress inside the Senate chamber.

Judge Royce Lamberth has had Chansley held in jail since his arrest, despite his multiple attempts to gain sympathy and his release.

Other judges are likely to look to Lamberth's sentence as a possible benchmark, since Chansley is one of the first felony defendants among more than 660 Capitol riot cases to receive a punishment.

Pictures of Chansley at the Capitol went viral because of his bizarre appearance while leading others through the Capitol, shouting into a bullhorn. As one of the first 30 rioters inside the building, he made his way to the Senate dais that was hastily vacated earlier by then-Vice President Mike Pence, and left a note that read, "It's Only A Matter Of Time. Justice Is Coming!" according to his plea documents.

Chansley also carried an American flag on a speared flagpole, which prosecutors have characterized as a weapon.

Lamberth asked only a few questions -- about Chansley's leaving a note for Pence and whether he knew of other threats to Pence's life coming from the crowd, and about his choices that day.

Prosecutor Kimberly Paschall used several videos to show Chansley's entrance into the Capitol building and Senate chamber, yelling along with the crowd. "That is not peaceful."

Paschall called his role as the "flag-bearer" of the mob "chaos" and "terrifying."

Before January 6, Chansley "posted vitriolic messages on social media, encouraging his thousands of followers to expose corrupt politicians, to ID the traitors in the government, to halt their agenda, to stop the steal, and end the deep state," Paschall said. "That was a call to battle."

After the riot and his arrest, Chansley asked then-President Donald Trump for a pardon. He also went on a hunger strike in an attempt to get organic food while in custody and spoke to "60 Minutes" from jail without permission. In September, Chansley pleaded to a felony charge of obstructing Congress' certification of the 2020 vote.

Spoke for more than a half-hour

For more than 30 minutes, Chansley spoke to Lamberth about the impact jail has had on him, and the guilt he feels for breaking the law.

He said he was wrong to enter the Capitol on January 6, and that he is not an insurrectionist or domestic terrorist, but rather a "good man who broke the law."

His sprawling speech held the attention of the judge, as Chansley quoted Supreme Court Justice Clarence Thomas and "The Shawshank Redemption," and described wanting to live his life like Jesus Christ and Gandhi.

"The hardest part about this is to know that I'm to blame. To have to look in the mirror and know, you really messed up. Royally," Chansley said.

"I was in solitary confinement because of me. Because of my decision. I broke the law ... I should do what Gandhi would do and take responsibility," he says. "There's no ifs, ands or buts about it, that's what men of honor do." He promised to never have to be jailed again.

"I think your remarks are the most remarkable I've heard in 34 years," Lamberth told Chansley, calling his speech "akin to the kind of thing Martin Luther King would have said."

But, Lamberth added, "what you did here was as horrific as you now concede," and he could not justify a shorter sentence.

After the hearing, Chansley's attorney Albert Watkins said that Chansley is "embracing being held accountable."

Chansley will get credit for the time he has already served behind bars. He will also have to pay $2,000 for damage done to the Capitol building during the riot, and will serve three years of supervised release at the end of his prison term.