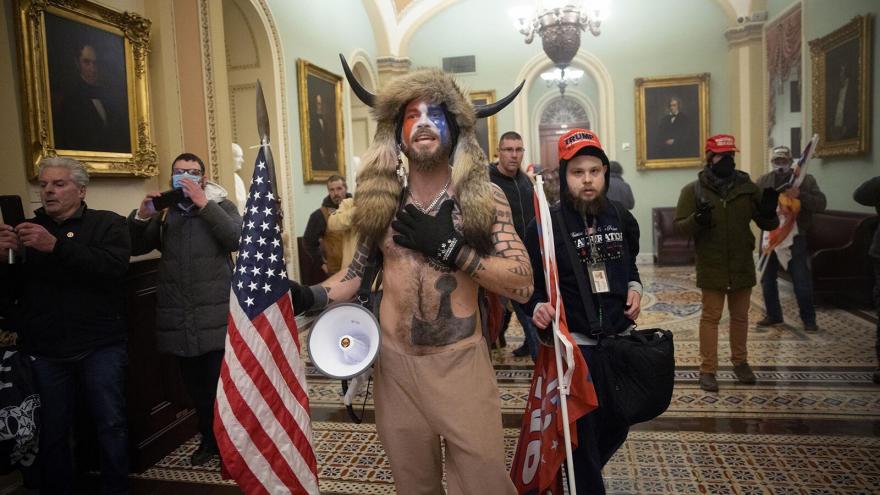 A federal judge ruled Monday that the so-called "QAnon shaman" who was charged in the Capitol insurrection is too dangerous to release and must stay in jail while his case moves forward.

(CNN) -- A federal judge ruled Monday that the so-called "QAnon shaman" who was charged in the Capitol insurrection is too dangerous to release and must stay in jail while his case moves forward.

Judge Royce Lamberth said that Jacob Chansley was unrepentant and could plot further attacks against the US government if put on house arrest. He rebuked Chansley as having shown "a detachment from reality" by claiming his actions on January 6 were peaceful and harmless.

"Defendant characterizes himself as a peaceful person who was welcomed into the Capitol building on January 6th by police officers. The Court finds none of his many attempts to manipulate the evidence and minimize the seriousness of his actions persuasive," Lamberth wrote.

Chansley had asked the judge to release him from jail in recent weeks, in a series of attention-grabbing moves from him and his lawyer. Lamberth's decision on Monday rejected several of Chansley's arguments but primarily hinged on the fact that Chansley carried a spear on January 6.

Chansley's lawyer had argued it was a flagpole, but Lamberth determined it was clearly a dangerous weapon.

Lamberth's 32-page opinion methodically dismantled most of Chansley's arguments and sided with the Justice Department's request to keep Chansley behind bars pending trial. The judge used Chansley's words against him, including his recent jailhouse interview, which seems to have backfired.

"The statements defendant has made to the public from jail show that defendant does not fully appreciate the severity of the allegations against him," Lamberth wrote. "To the contrary, he believes that he -- not the American people or members of Congress -- was the victim on January 6th."

Chansley isn't charged with attacking anyone, but the Justice Department has maintained that his behavior during the insurrection makes him too dangerous to release. He was a well-known figure in the QAnon conspiracy community -- one of many QAnon believers who have been charged in the Capitol riot.

He has pleaded not guilty to a six-count indictment.

Lamberth also said he was not persuaded by Chansley's attempts to argue that the spear he brought into the Capitol was not a weapon. The dangerousness of the item was an important sticking point in whether he would be jailed before trial, as it relates to the violent nature of the charges he's facing.

"A six-foot pole with a metal spearhead fixed to the top is, undoubtably, a dangerous weapon," Lamberth wrote, agreeing with the Justice Department's point of view regarding the weapon.