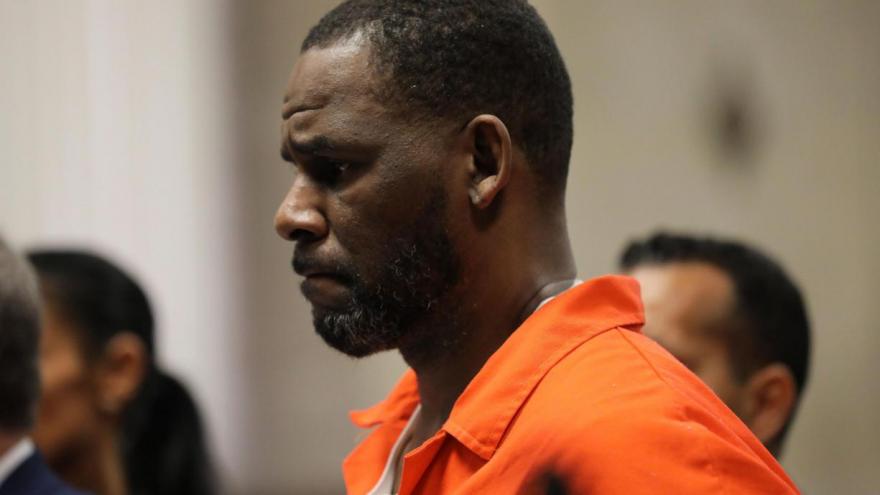 R. Kelly, seen here during a court hearing on September 17, 2019 in Chicago, faces racketeering and sex crime charges at his federal trial.

(CNN) -- For some of R. Kelly's accusers, the start of his federal trial in New York is a long-awaited second chance at justice.

Kelly, a singer whose real name is Robert Sylvester Kelly, is facing multiple counts including racketeering with underlying charges that include the sexual exploitation of children, kidnapping, and sex trafficking women and girls. He has pleaded not guilty to all charges. Kelly was previously on trial in 2008 for state child pornography charges in Illinois but was acquitted.

Opening arguments start Wednesday, and the trial is expected to last between six and eight weeks. Twelve anonymous jurors -- seven men and five women -- and six alternates were selected last week. They will be the only members of the public with an in-person view of the trial, after US District Judge Ann Donnelly ruled not to allow members of the public or media in the courtroom, due in part to Covid-19 restrictions.

Prosecutors are expected to make their case that for decades Kelly preyed upon women and girls who dreamed of meeting a superstar, and that his associates were part of a criminal enterprise that lured victims to the singer where some were sexually abused and, at times, filmed being abused.

It was a stunning fall from grace for the 54-year-old Grammy-winning entertainer who, after touring the world for decades, has spent the last two years in federal facilities in Illinois and New York awaiting trial since his arrest in July 2019. Kelly also faces federal child pornography and obstruction charges in the Northern District of Illinois, and faces state charges there for multiple counts of aggravated criminal sexual abuse.

Now, facing decades in prison if convicted of the most serious charges, Kelly has spent the last few months shuffling his legal team and attempting to prepare for the trial of his life during a pandemic while struggling to do so because of his illiteracy, his lawyers say. The singer's funds have been "depleted," defense attorney Deveraux Cannick told the court at a hearing earlier this month.

"At this point, the public has only heard one side of the story in this case and that is about to change in the coming weeks. We look forward to the truth and the facts coming to light as the defense will continue to vigorously defend Mr. Kelly," defense attorney Thomas Farinella said in a statement to CNN. "After all, the RICO 'Enterprise' is based on a series of independent relationships and events that the government is trying to patch together like different types of fabrics and trying to pass it off as silk."

For accusers, a 'harrowing' experience

For Kelly's accusers, who saw his acquittal in 2008, the months ahead of Kelly's Brooklyn federal trial have been uneasy.

Gerald Griggs, an Atlanta-based attorney, represents several accusers and their families who he said are part of cases in other districts. He said these accusers, some of whom he is not naming at this time, fear further attempts to obstruct justice by Kelly and his associates.

Weighing on some accusers' minds are allegations that Kelly and his associates obstructed justice surrounding his 2008 trial. A federal indictment filed in Illinois in 2019 outlines some of these accusations, including charging Kelly with persuading an unnamed minor to give false testimony to an Illinois federal grand jury in 2002. Prosecutors said ultimately the minor testified that Kelly did not have a sexual relationship with her, and that she was not the person shown in a sexually explicit video. That video was the center of Kelly's 2008 trial, and the minor ultimately decided not to testify at the time.

Timothy and JonJelyn Savage, who say their estranged daughter Joycelyn still identifies herself as one of Kelly's girlfriends, are represented by Griggs, who says they are associated with the Illinois federal case against Kelly.

While they aren't part of Kelly's New York case, they still hope to go to Brooklyn federal court and see the trial take place, even though courthouse restrictions mean they will be sitting in a different courtroom from Kelly and won't be able to see Kelly in person.

"The upcoming trial to many may be a spectacle, but for us it's the opportunity to find resolution," the Savages said in a statement to CNN. "After five years of consistent fighting, mental breakdowns and dead ends to get our daughter back, it is our responsibility as parents to show up and be present for other mothers and fathers in similar circumstances to not give up hope. We are trusting the US Attorney's Office alongside the justice system will be fair and honest with the contents of this trial."

CNN has reached out to an attorney for Joycelyn Savage for comment. In a video published by TMZ in 2017 she said, "...I'm totally fine. I'm happy where I'm at and everything is OK with me."

For those accusers who are expected to testify, it will likely be an unnerving experience. Moira Penza, a former federal prosecutor who won a conviction against Keith Raniere, the leader of the cult-like group Nxivm, on racketeering and sex trafficking charges in 2019 in the same courthouse where Kelly will stand trial, knows what it is like to prepare these survivors to face and testify against their abuser.

"It is still going to be one of the most harrowing experiences for any person who has been the victim of a crime, to get on the stand, have to relive the pain of what you experienced and then, when that's done, literally have someone coming up and try and call you a liar and try to attack you," Penza told CNN.

But, she says, accusers should feel confident that this federal case is different from the state trial Kelly was able to win an acquittal for in 2008, after a key witness refused to testify.

"Having the RICO (racketeering) charge, in particular, allows prosecutors to really give this aerial view over a long period of time at a very high level of who R. Kelly and his enterprise are, and the types of crimes that they've been committing and the ways in which they've committed those crimes -- that's a very different case," Penza said. "You have a lot more evidence that is going to come in and be able to corroborate what the victims are saying."

What we may see at R. Kelly's trial

There is a mountain of evidence that is expected to be presented at trial, including videos of alleged abuse and testimony from both victims and former associates of Kelly. Prosecutors hope to convince jurors that Kelly was the leader of a criminal "enterprise" made up of people who served as the singer's managers, bodyguards, drivers, personal assistants, runners and members of his entourage.

"The purposes of the Enterprise were to promote R. Kelly's music and the R. Kelly brand and to recruit women and girls to engage in illegal sexual activity with Kelly," reads one of the Brooklyn federal indictments.

Multiple charges allege that Kelly sexually abused underage girls and filmed those incidents in the years after his 2008 acquittal.

Attorneys for Kelly said in an August 6 filing that the government's request to admit additional evidence revolving around uncharged acts was an attempt to "further pile on" excessive amounts of unnecessary evidence.

"The government has done nothing more than stitched together a series of events spanning over three decades in an attempt to create an irrefutable mirage of guilt as to Mr. Kelly which will make it impossible for him to receive a fair trial," the filing by Farinella and attorney Nicole Blank Becker states.

There are also former associates of Kelly -- who were arrested for and pleaded guilty to crimes related to allegedly threatening or harassing Kelly's accusers -- who may be cooperating with the government. They include Richard Arline, who allegedly offered an unnamed witness $500,000 in May 2020 "in exchange for not continuing to cooperate with the government against Kelly," according to a criminal complaint. Arline pleaded guilty in February to one count of bribery and is expected to be sentenced at a later date. Prosecutors have not responded to requests for comment on whether he is expected to testify in Kelly's New York trial. An attorney for Arline has not responded to CNN's request for comment.

"At no time did Mr. Kelly have anything to do with the actions Arline took," Farinella told CNN.

Prosecutors allege that Kelly had rules that many women and girls he had sex with had to follow. Some were not permitted to leave their room -- even to go to the bathroom or eat -- without getting permission from Kelly. Some were required to wear baggy clothing when they were not with Kelly, and were not allowed to look at other men. Many were required to call Kelly "Daddy," according to the complaint.

"If you are isolating people, if you are not allowing them to use the bathroom without permission -- these are things that completely drain you of any agency," Penza told CNN.

But Penza said, for survivors of Kelly's alleged abuse, being able to walk into federal court and testify against him may finally give them their power back.