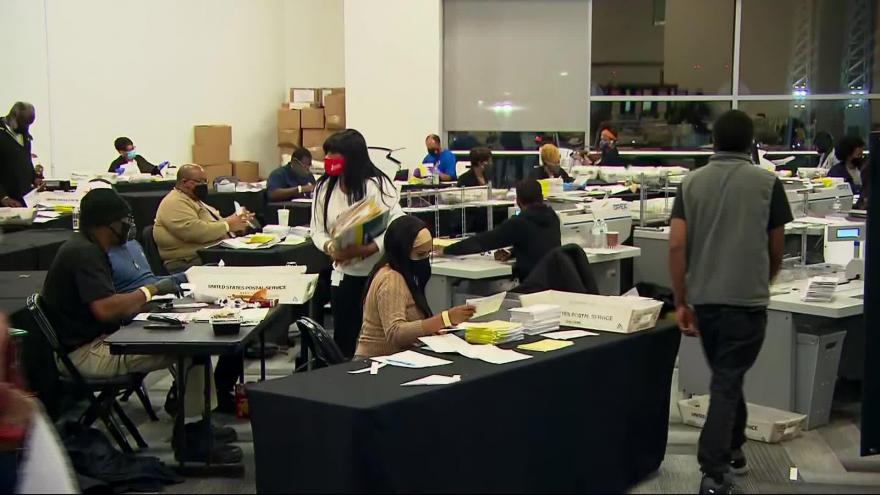 Race for the White House narrows as votes are counted in key battlegrounds.

(CNN) -- Former Vice President Joe Biden is planning a prime-time address Friday evening as he continues to widen his lead in his birth state of Pennsylvania, placing him within striking distance of the 270 electoral votes that he needs to win the White House.

Biden is ahead by more than 14,500 votes in the Keystone State and the momentum has remained in his favor in a state with 20 electoral votes that President Donald Trump cannot afford to lose. On Friday afternoon, there were more than 110,000 vote-by-mail ballots left to count in Pennsylvania, officials said. Some of the ballots that are now being counted are provisional and many others will also need extra time and care, for reasons that include damage, legibility, signature issues or other defects.

There are still about 40,000 ballots that need to be counted in Philadelphia County, a heavily Democratic area that helped power Biden into a lead over Trump. But Philadelphia City Commissioner Lisa Deeley told CNN it "could take several days to complete the reporting" of those votes.

In the Democratic bastion of Allegheny County, some 52,000 ballots remained outstanding midday Friday. Under a court order that stemmed from a ballot printing error, Allegheny County election officials could not even begin reviewing about 29,000 of those ballots until 5 p.m. ET.

As Pennsylvania's count slows, advisers to both Biden and Trump are still closely watching tight races in Nevada and Arizona that could influence the destiny of the race.

If Biden holds Nevada, a state with 6 electoral votes that Hillary Clinton won in 2016, and flips Arizona, which has 11 electoral votes, from red to blue, that would provide him with another path to the White House.

Biden so far has 253 electoral votes and the President has 213, according to CNN projections.

The former vice president was leading Trump in Nevada by more than 20,000 votes mid-afternoon on Friday, but counting in that state has been painfully slow. More than 63,000 ballots are outstanding in Clark County, the area surrounding Las Vegas that has long been the lynchpin for Democrats. The county will report additional votes twice a day until the count is complete, and Clark County Registrar of Voters Joe Gloria would not estimate how many more would be counted Friday.

"We are hoping to have the mail [ballots] done by Sunday if all goes well," Gloria told reporters.

Plans are being made for Biden to speak Friday night in what aides hoped would be a victory speech. His running mate, California Sen. Kamala Harris, is expected deliver remarks ahead of Biden, according to a campaign aide.

The momentum has continued to steadily shift in Biden's favor as officials across the country have counted the hundreds of thousands of vote-by-mail ballots. That has infuriated the President, who is falsely claiming that Democrats are trying to steal the election from him even though many states are simply counting legally cast ballots that could not be canvassed before Election Day.

Trump continued his efforts to undermine democracy on Friday afternoon by falsely suggesting in a statement that there is voter fraud in the election, even though there has been no evidence of that thus far.

"This is no longer about any single election. This is about the integrity of our entire election process," Trump said in the statement, inaccurately asserting that "illegal ballots" are being counted.

"We will pursue this process through every aspect of the law to guarantee the American people have confidence in our government. I will never give up fighting for you and our nation."

One major area of anxiety for the Trump campaign is the fact that Biden jumped ahead of Trump in Georgia around 4:30 a.m. ET Friday and led in the afternoon by just more than 4,200 votes.

The former vice president's surprising strength in the state stemmed from huge turnout from Black voters in Fulton County and other suburbs around Atlanta, fatigue with Trump in Georgia's fast-growing suburbs -- which have become increasingly young and diverse in recent years -- and assiduous work over more than a decade to boost Democratic registration in the state.

"Right now, Georgia remains too close to call. Of approximately 5 million votes cast, we'll have a margin of a few thousand," Georgia Secretary of State Brad Raffensperger said in a news conference Friday, adding, "with a margin that small, there will be a recount in Georgia."

There is no automatic recount in Georgia, but a candidate can request a recount after votes are certified if the results are within 0.5%.

Trump's campaign general counsel Matt Morgan said in a statement earlier Friday, "Georgia is headed for a recount, where we are confident we will find ballots improperly harvested, and where President Trump will ultimately prevail."

No Democratic presidential nominee has won the state since Bill Clinton in 1992. Clinton narrowly defeated former President George H.W. Bush in that state in part because he and Bush were in a three-way race that included Ross Perot, an independent candidate for the presidency.

As the drama unfolded across the country, the President's allies launched legal challenges and floated conspiracy theories while Trump tweeted "Stop the Count!"

Even as vote totals now show him trailing Biden in key battleground states, Trump has not prepared a concession speech and in conversations with allies in recent days, he has said he has no intention of conceding the election, people familiar with the matter said. Trump's campaign made clear in a statement Friday that it will contest the election, calling the race "far from final."

In response to reports Trump has no plans to concede, Biden's campaign said, "The American people will decide this election."

"And the United States government is perfectly capable of escorting trespassers out of the White House," campaign spokesman Andrew Bates said in a statement.

On Thursday night, Trump effectively sent a signal that he has no intention of leaving power without a fight if he ends up losing the election. The speech from the White House briefing room -- in which Trump falsely claimed that votes that were cast before and during the election, but counted after Election Day, are illegal votes -- could end up being one of the most dangerous presidential statements in American history.

The President also made ludicrous claims that his leads on election night shrunk because Democratic officials keep finding ballots, when in fact the counts have narrowed because election officials in many states counted the vote-by-mail ballots, which favored Democrats, after the Election Day votes, which tended to favor Republicans.

Utah Republican Sen. Mitt Romney tweeted Friday that Trump's comments about a rigged election "damages the cause of freedom here and around the world," going further than the rest of the Senate GOP conference, where some top Republicans have continued to defend Trump's baseless claims of voter fraud.

As the President spoke Thursday night, the daily tally of new US coronavirus infections hit 114,876, the worst daily count ever, encapsulating how Trump's political obsessions have driven his neglect of a crisis that has killed more than 235,000 Americans.

Biden's advisers have mounted an aggressive behind-the-scenes push to get his supporters -- and, even more importantly, Republicans, including those with whom he worked in the Senate -- to help validate the sanctity of the election.

The Biden campaign took note of Trump's dire tone in the White House Thursday night and began a plan that is underway Friday to get Biden's old allies in the Senate -- and others from a lifetime in public life -- to speak to the legitimacy of the election.

Biden emerged in Wilmington, Delaware, for a short speech Thursday meant to project optimism, urge patience in the vote counting and to apparently create a picture of a presidency in waiting.

"In America, the vote is sacred. It is how the people of this nation express their will," he said, calling for calm and patience as the vote counting process unfolds.

The President's team, in contrast, had earlier bullishly insisted that the President would win Pennsylvania with some room to spare. "Donald Trump is alive and well," Trump's campaign manager Bill Stepien said.

But a Trump adviser told CNN's Jim Acosta that Biden's growing momentum in the commonwealth is causing increasing worry in the campaign, conceding the margin would be "tight." The adviser stressed Trump's future is riding on Pennsylvania.

"Pennsylvania matters," the person said, before adding, "they all matter," conceding the President can't really afford to let any of these remaining states slip away.

It has long been known that Biden would benefit from a late surge of mail-in balloting that was preferred by Democrats amid the pandemic. The President spent months on the campaign trail, falsely blasting mail-in ballots as prone to fraud -- one reason why GOP voters have proven far less likely to use them.

Trump cannot find a route to 270 electoral votes without Georgia and Pennsylvania, so his chances of securing reelection will hinge on developments in those two states in the coming days.

In Arizona, several tranches of votes from Maricopa County, which includes Phoenix, narrowed Biden's lead to just less than 40,000 votes, with Trump's team insisting the President will eventually prevail and keep his hopes of a path to 270 alive.

If Biden holds leads in Arizona and Nevada, he will get to 270 electoral votes and become the next President, regardless of what happens in Pennsylvania and Georgia.

Trump's team, seeking to keep his slim path to victory alive, has launched a flurry of sometimes contradictory and scattershot legal challenges, without offering evidence of irregularities, demanding vote counts continue in states where he is behind and wanting them shut down in those where he leads.

"STOP THE COUNT," Trump tweeted Thursday morning, even though taking such action at the time would have frozen the race and given an advantage to his opponent, and the fact that carrying out his demand would be akin to voter disenfranchisement, with tens of thousands of legally cast ballots still being counted.

On Friday afternoon, lawyers for Pennsylvania Republicans asked the US Supreme Court to order the state to not take any action on any mail-in ballots received after Election Day. Pennsylvania's secretary of state had already ordered any ballots that arrive between Wednesday and Friday to be segregated from those that arrived by Election Day, pending ongoing litigation, so the state GOP's request simply asked the court to enforce that action as well as order that "no action" is taken on the ballots.

Trump and his campaign team have also sought to raise doubts about how Biden made a late surge to victory in the vital state of Wisconsin, where the Democrat rose on the strength of mail-in and early votes that were counted after most of the ballots cast in person on Election Day.

The Trump campaign said Wednesday that it will demand a recount in Wisconsin while mounting legal challenges in Michigan and Georgia.

The campaign's state-by-state approach revealed the glaring inconsistencies in its strategy: it appears to be trying to stop vote counts in states where Biden was once trailing, like Pennsylvania and Georgia, while demanding that all the votes are counted in states where it believes the President has a chance of catching up to Biden, like Arizona and Nevada.

Trump has offered a less-than-enthusiastic endorsement of his team's legal strategy in phone calls with some of his allies this week, sounding resigned to the plan falling short and questioning why his team hadn't successfully challenged voting rules before the election, even as he remained willing to see it through, CNN reported.

A court in Pennsylvania on Thursday said Trump campaign observers could stand closer to watch ballot processing in Philadelphia -- a relatively inconsequential ruling that Trump campaign associates quickly touted as being a massive win, as votes are still being counted there that could decide the state.

No court has found wrongdoing in the ballot counting process in Philadelphia.