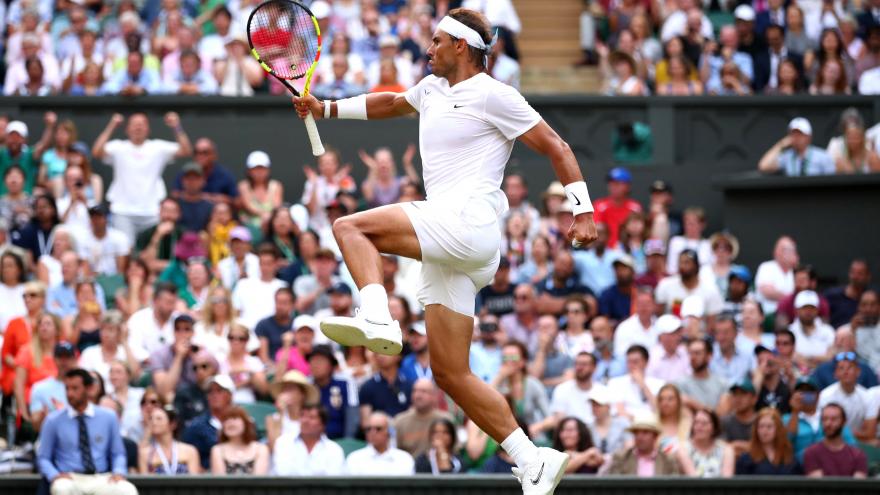 (CNN) -- In a city known for its vibrant theater life, the best place in London Thursday had to be Center Court at Wimbledon for Rafael Nadal's emotional 6-3 3-6 7-6 (5) 7-6 (3) victory against Nick Kyrgios in a second-round blockbuster that overflowed with activity.

It was one night only with an encore sadly having to wait until the next time the bitter rivals happen to be paired together at a tournament.

"I thought it was great entertainment," Roger Rasheed, the former coach of Lleyton Hewitt and Gael Monfils, told CNN. "It had a bit of everything."

"It was interesting in more ways than one," former Wimbledon favorite Tim Henman added to CNN.

Often cast as the villain, Kyrgios certainly played the part in the three-hour thriller when he labeled chair umpire Damien Dumusois a "disgrace" for the way he officiated Nadal's unhurried play, earned an unsportsmanlike conduct warning for his constant chatter with the Frenchman and lashed a forehand at Nadal that left the world No. 2 seething.

"Yeah I was going for him," Kyrgios admitted in a mostly light-hearted session with reporters where you wouldn't have guessed he lost a heartbreaker on the most famous tennis court in the world. "I wanted to hit him square in his chest."

Nadal regularly whipped up the crowd, desperately urging them to get behind him, particularly in the third set.

Oh, and there was great tennis, too.

The duo combined for 102 winners and 43 unforced errors and neither faced a break chance in the last two sets. Kyrgios slammed 29 aces yet paid the price for a lethargic start.

"Nick offers such a strong product that Rafa is on high alert and you can see that and I thought that brought out a lot of good qualities in Rafa," said Rasheed, an analyst with Fox Sports Australia. "I enjoyed the match. Everyone who watched it should have gotten a lot out of it."

Nadal could very well return to the grandest stage in the sport Saturday against the charismatic Jo-Wilfried Tsonga as he continues his quest for a first Wimbledon crown in nine years.

Downing the dangerous Kyrgios figures to be a massive boost for his confidence going forward this fortnight five years after he was upended by the then teenager at the same venue.

"Is true that it was a tough draw, a tough opponent for a second round, maybe the one that you want to face less in a second round like this, especially here," Nadal told reporters. "It's an important victory for me."

For Kyrgios, don't be surprised to find him at the pub about a 15-minute walk away from center court he is helping to make famous -- the Dog & Fox -- having spent some of his evening there Wednesday ahead of the grudge match.

Instead of celebrating, he would be drowning his sorrows.

His lack of motivation for playing professional tennis has often been highlighted -- he loves basketball -- and Kyrgios said he can't contend for a major now because he is too unprofessional. But he desperately wanted to beat the 18-time grand slam winner who he called "super salty" in May.

Those remarks came after Nadal said the Australian didn't respect his opponents, the crowd -- and himself -- in the wake of blowing three match points in their heated Acapulco clash in February.

Kyrgios authored an underarm serve in Acapulco, and after hitting an underarm ace Thursday he then crushed a 143-mile per hour second serve to demonstrate his unpredictable genius.

Even the ever intense Nadal smiled following the slower serve.

The crowd collectively chuckled but there were jeers in the second set when he attempted another underarm serve.

Once again, he won the point as Nadal sent a forehand into the net.

There were even more laughs when Kyrgios sneezed three times in succession but they vanished when the world No. 43 ripped a laser forehand pass at Nadal at 4-4 in the third.

The volley was too hot to handle for Nadal, who glared at Kyrgios as he returned to his baseline.

Kyrgios didn't see it as his back was toward his foe and never did apologize.

"Why would I apologize? The dude has got how many slams, how much money in the bank account? I think he can handle a ball to the chest," he said.

Kyrgios' antics left one fan who has been coming to Wimbledon since the 1950s to tell CNN: "He annoys me."

Yet he claimed he wasn't offended by the bulls-eye shot, more concerned about someone else on court being struck.

Sure enough, another forehand from Kyrgios after a point ended almost struck a linesperson.

But the cries of "come on, Nick" or "come on Kyrgios" certainly matched -- or maybe surpassed -- the encouragement for his more accomplished opponent.

One could even say the loudest roar came when Kyrgios ripped a forehand winner to break for 2-0 in the second. An eruption of sound filled the air, with Kyrgios' box quickly out of their seats in joy.

Nadal got back on serve but claimed he was put off by Kyrgios' conversation with Dumusois readying to serve at 3-4 that earned the Canberra native the warning.

Throughout the four sets, Nadal waited in his chair when "time" was called by Dumusois and took his time to serve and receive, which all irked Kyrgios.

Nadal was duly broken to trail 5-3 and the set was done.

As can be the case on grass, small pockets of points can decide matters.

It happened in both the tiebreaks.

Nadal opened up mini-break advantages of 3-1 and 3-0, respectively. The quality of the first tiebreak exceeded that of the cagey second, and Nadal leaped in joy when sealing the third with a big forehand.

"In the two tiebreaks, I thought Rafa was exceptional," said Rasheed. "He elevated his game, found his serve. Found a lot of returns and was fierce with his ball striking."

Kyrgios conversely immediately handed over the initiative in the fourth-set tiebreak by erring on a put away at the net.

A brief handshake followed and Nadal's finger wag -- a gesture that seemed to indicate "Not this time" -- evoked memories of Roger Federer doing the same thing after ending Novak Djokovic's roughly five-month winning streak in 2011 at the French Open.

Kyrgios quickly put on his basketball shoes and threw his towels into the stands.

They signed autographs side by side, but don't expect them to be in close proximity outside the court anytime soon.