Raging fires and hundreds of thousands without power in California 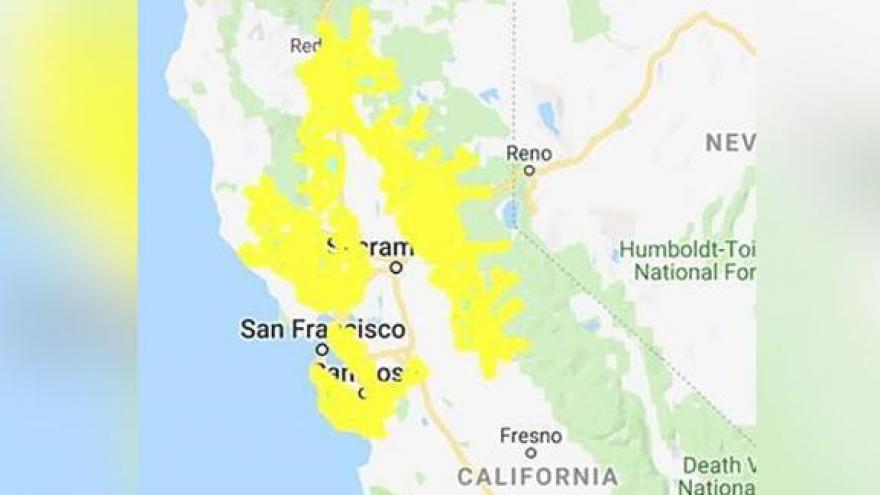 (CNN) -- When the power went out for almost 800,000 Californians this week to prevent wildfires, it was not the first time. And many are left wondering whether it will be the last.

Pacific Gas and Electric Company cut electricity in parts of northern California on Wednesday to lower the risk of the company's equipment starting a wildfire, a tactic it warned residents about in February.

And officials say this could become California's "new abnormal," as the state sees especially dry and windy conditions.

The power outages Californians may have to prepare for in the future have affected education, business and everyday life.

The outage has racked up a bill of at least half a million dollars for the city of San Jose, where Mayor Sam Liccardo warned residents to make emergency kits and shelter in place as the loss of power put some traffic lights out.

Residents stocked up on water and waited in long lines to fill up on gas before the shortage.

Without power, classes were canceled at UC Berkeley Friday, and faculty and staff were told to stay away from campus, according to a statement from the university.

Both homes and businesses scrambled to salvage their sustenance and their incomes.

One woman, who had previously lost her home in a fire, drove a half-hour to a relative's home to store the contents of her refrigerator when she got word that she would lose power. Business owners, like restaurateur Linda Lokey, say they have lost as much as tens of thousands of dollars in business and wasted supplies.

"For mom and pops like us and all the businesses here, this can be very devastating and catastrophic for our business to recover from," Lokeytold CNN affiliate KTXL.

A fire season on the rise

During the state's fire season, high winds and dry conditions fuel the massive flames. And as the climate in the region changes, so does the intensity of California's fires, according to CNN meteorologist Robert Shackelford.

Since the 1970s, he said, California wildfires have increased in size by eight times, and the annual area burned by fires has increased by nearly 500%.

As the environment changes, PG&E's Sumeet Singh told reporters Wednesday that "dealing with wildfires is the new abnormal within California."

Those words echo what former Gov. Jerry Brown said during last year's Camp Fire -- the deadliest in the state's history. "This is not the new normal, this is the new abnormal," Brown said at the time. "The chickens are coming home to roost, this is real here."

PG&E has said that it's "probable" that the company's equipment started the Camp Fire when a powerline touched nearby trees. The fire left 85 dead.In September, the company reached an $11 billion settlement with insurance companies for claims stemming from the Campfire and 2017 fires in the region.

The fires and an earlier explosion of a gas pipeline led to a federal case against PG&E, which brought new requirements for the company.

The judgement ordered that the company's electrical grid be re-inspected. The areas deemed to be unsafe were to be documented and addressed. But if the weather reached fire risky conditions, those areas marked still unsafe and unattended to could have power shut off.

As the dry winds increased, the company shut off power to areas that were marked unsafe.

"We faced a choice between hardship or safety, and we chose safety," said Michael Lewis, senior vice president of PG&E's electric operations. "We deeply apologize for the inconvenience and the hardship, but we stand by the decision because the safety of our customers and communities must come first."

But many, like Gov. Gavin Newsom, see the shutdown as a way to avoid the cost of repairing and updating the company's equipment.

"Turning off the power to hundreds of thousands of businesses, public facilities and homes during high wind events may be necessary at the moment, but it cannot be allowed to become the new normal. It's not a sustainable, long-term solution for any community," Congresswoman Jackie Speier posted on Facebook.

Members of the public have lashed out. PG&E said its Oroville office was egged, and California Highway Patrol reported that someone had fired a bullet into one of the company's vehicles Tuesday.

"We really want to put pressure on PG&E to make investments on their infrastructure to make it safe and reliable so they won't have to shut down when there are weather events," San Jose Deputy City Manager Kip Harkness said.