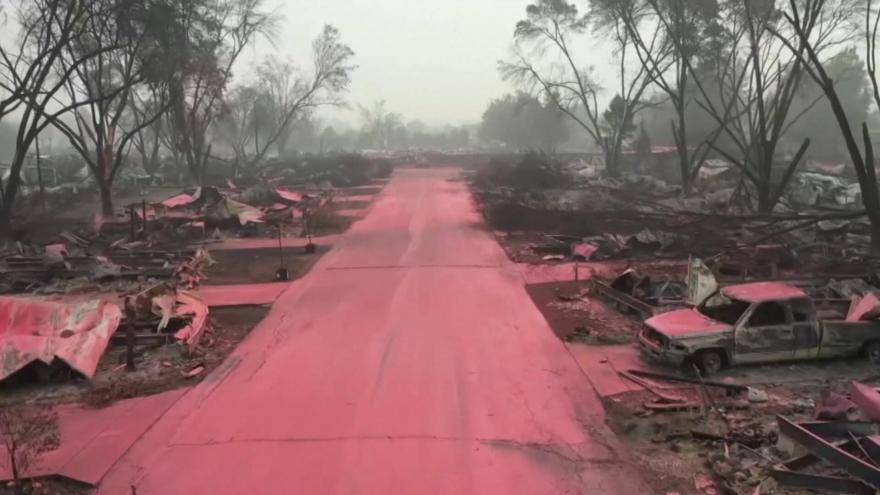 Red fire retardant covered the destroyed streets and homes of Talent, Oregon after wildfires tore through the town.

The average temperatures in the Golden State have increased by three degrees since 1980, illustrated most recently with the hottest August in recorded state history, according to Newsom.

"The fundamental facts cannot be denied," Newsom said. "The trendlines are not going in the right direction."

The governor's comments come just two days after President Donald Trump refused to acknowledge the effects the climate crisis is having on the state's forest fires during a visit to California, where he joined Newsom on a tour of a wildfire-ravaged area.

Newsom said Wednesday that he "directly confronted the president" on climate change -- though a video of the press briefing from earlier this week shows a more gentle exchange between leaders.

"I think there's a way of approaching people and good people can disagree," Newsom said. "And I maintain we are making progress and to the extent we are being heard, I believe we are."

However, he said that he does not expect Trump to "radically change course."

"I will continue to be stubborn as I imagine he will be as well, it's not a belief system, it's data," he said. "Science. You have to acknowledge facts."

Just one month ago, lightning strikes during an extreme heat wave sparked rash of fires across the state.

Already, multiple blazes have destroyed more than 4.7 million acres across the West Coast, as dry grass and high winds have created tinderbox conditions.

The fires have killed at least 34 people, and reduced thousands of homes to embers.

The American Farm Bureau Federation, which describes itself as "an independent, non-governmental, voluntary organization governed by and representing farm and ranch families," and 13 state farm bureaus sent a letter to Congress asking for additional resources to prevent and recover from the catastrophic wildfires on the West Coast.

"Backlogs in adequate management coupled with drier, hotter conditions, have resulted in unhealthy, overly dense forests," the letter states. "When fires inevitably occur, these conditions result in larger, more catastrophic fires that are difficult to control, destructive to both urban and rural communities and pose great threats to both private property and human life."

The letter, addressed to Senate leadership, also advocates for the Emergency Wildfire and Public Safety Act, which is being considered in the Senate today.

The Act would speed up forest management and post-fire reforestation, and have dangerous wood removed from forests.

"Farm Bureau members hold public lands grazing permits, own property adjacent federally managed lands and engage in both public and private land forestry," they wrote in the letter. "In addition to direct crop and livestock losses, agricultural commodities are also being impacted via smoke-taint and ash."

In the Oregon capital of Salem, school started Wednesday after a few days of delays because of the fires, according to CNN affiliate KPTV.

Students will be going to class online because of the coronavirus pandemic.

"Our educators have done an incredible job in the midst of really tough changes in the system, new technology and are really showing up for our kids," Salem-Keizer Public Schools Superintendent Christy Perry said. "And what we keep reminding them, what our kids need most, is just to see them, so that's our week."

She added: "The wildfires have made everything a little rockier for us, too."

The school district has about 41,000 students. Perry told KPTV that students' lives were mostly affected by the smoke. Some staff members were forced to evacuate, she said.

"I told my advisory kids this a few times today, like it will all be fine," teacher Macy Bowser said. "It's all going to work its way out."

More than 17,000 firefighters are on the front lines in California battling more than two dozen large fires. At least 25 people have died and 3.3 million acres have burned since the beginning of the year.

This year's deadliest fire has been the North Complex, with at least 15 deaths, It has burned more than 273,000 acres and was 36% contained as of Wednesday. It is the fifth deadliest fire in state history.

The Butte County Sheriff's Office has identified 10 of 15 victims, who range in ages from 16 to 79.

The August Complex Fire, the largest in state history, continues to burn in Northern California. It has consumed 817,952 acres and is 30% contained.

"With no significant precipitation in sight, California remains dry and ripe for wildfires," said Cal Fire. A warming trend returning over the weekend will increase the fire danger.

But smoke conditions and visibility are improving in Northern California, according to the Bay Area office of the National Weather Service.

"There's still smoke in parts of northern and interior #California but parts of the #SanFrancisco area are FINALLY seeing blue skies - and it is not being taken for granted," the office tweeted.

The drifting smoke from the fires in California has prompted the weather service office in Reno, Nevada, to issue a dense smoke advisory through Thursday morning. The affected areas include Lake Tahoe, the agency said.

Mobile morgue set up in Oregon

At least eight people have died and 12 more are missing among the 26 fires in Oregon, according to officials.

The Marion County Sheriff's Office said in a news release investigators identified two victims in the Beachie fire as 41-year-old Justin Cook and 71-year-old Cathy Cook, both from the city of Lyons. The Cooks were located near their property, the sheriff's office said in the release.

A mobile facility for the medical examiner has been established in Linn County as officials prepare for the possibility of more fatalities.

Despite deadly conditions, some residents opted to stay behind to protect their homes from incoming flames.

"My house is still there, my whole block is there, because we went up there and fought it," Richardson told KATU. "I've been there, I watched the town burn down, I was there for 14 hours trying to put it out with other people."

Richardson was able to save his home but most of the town was burned, the affiliate said.

A federal disaster declaration has been approved for the state to help fund the state's recovery and Oregon's Congressional delegation is urging Health and Human Services (HHS) Secretary Alex Azar to declare the wildfires in Oregon a public health emergency.

"This decision will make more Federal aid available to the State and provide resources needed for our communities to rebuild," Rep. Peter DeFazio (D) said in a tweet Tuesday. DeFazio wrote that he was told of the decision by White House Chief of Staff Mark Meadows.

"Oregon is resilient, but to fight fires on this scale, we need all the help we can get," tweeted Gov. Kate Brown. "Grateful we've been quickly granted a Presidential Disaster Declaration, helping provide support like damage assessment teams, search & rescue, debris management, shelter & medical assistance."