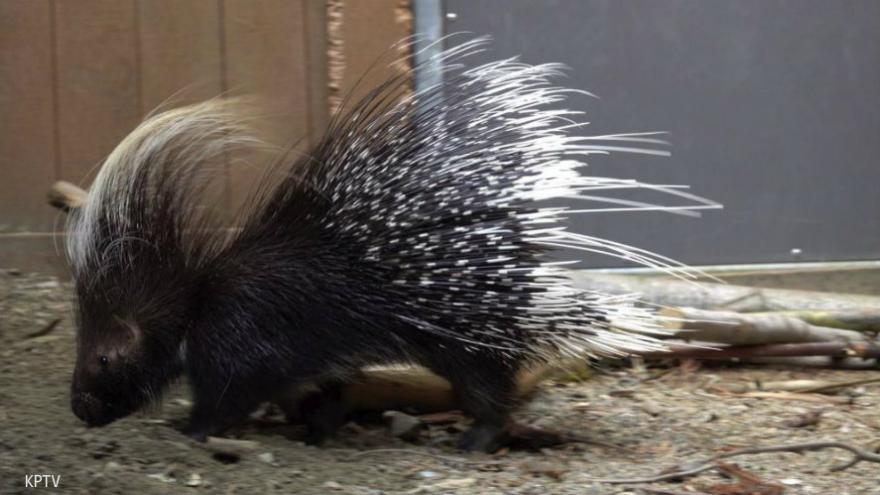 PORTLAND, OR (KPTV) -- A rare Cape porcupine has become a guest at the Oregon Zoo after spending more than a year and a half out in Washington.

Now named Porky, the rodent native to Africa is staying at the zoo’s veterinary medical center.

Porky was spotted on the streets of Spanaway, Washington back in March 2017, according to the zoo.

“We were very surprised to learn that an African porcupine was wandering around a neighborhood in Washington,” said Becca Van Beek, who oversees the Oregon Zoo’s Africa area. “Thankfully, a local wildlife rehabilitation organization was able to find her and bring her to the zoo where she could get the care she needs.”

Porky was located by A Soft Place to Land, a Washington wildlife rehab facility, after months of sightings. The group coordinated with the Oregon Zoo to transport her to Portland.

The porcupine’s permanent home will be the Fort Worth Zoo.

Before she makes the move, Porky is receiving medical care. Upon her arrival to the Oregon Zoo, Porky had a vet exam that revealed what appeared to be an air gun pellet lodged in her jaw.

Since the injury looked like it happened a while ago, zoo staff chose to leave the pellet there.

“Luckily the pellet did not hit her eye or break any bones,” said Van Beek. “But she had a hard life fending for herself outside. It’s scary to think what could have happened to her.”

The zoo said Porky’s history for how she got to Spanaway isn’t known, staff think she could have been bought as an exotic pet.

“Porcupines do not make good pets,” Van Beek said. “As highly skilled diggers, they can’t be safely kept in a backyard. They’re likely to escape — and they’re nocturnal, which makes them difficult to find if they do dig out. That’s probably how this porcupine ended up outside for such a long time.”