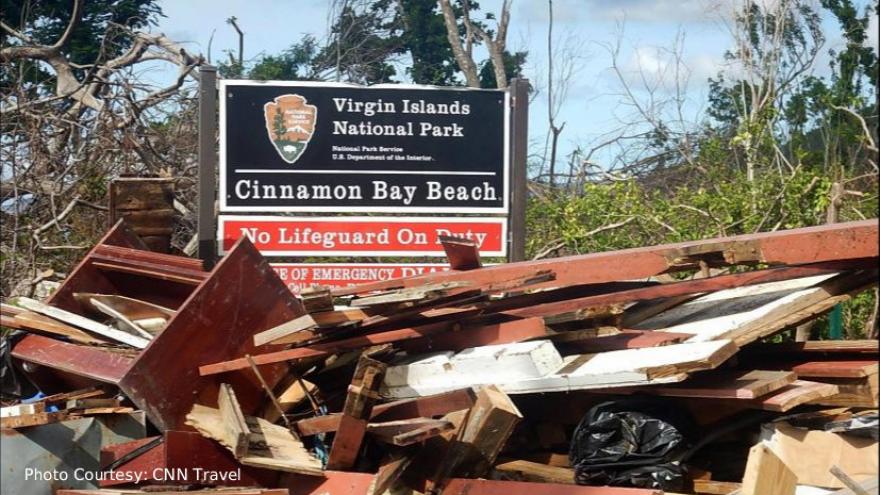 (CNN) -- Famous for its picture-perfect beaches, sunsets and renowned underwater snorkeling travel, the US Virgin Islands has been trying to restore that beauty after the devastation of two powerful storms in September 2017.

For an economy so dependent on travel and its renowned national park, there's some good news.

More than 100 days after Hurricane Irma devastated the island of St. John, Virgin Islands National Park reported that all beaches, trails and roads are open at the destination.

"Virgin Islands National Park is home to some of the most beautiful beaches in America and is a major economic contributor to the Island's economy, which is why it will be an important part of rebuilding after this devastating hurricane season," said US Interior Secretary Ryan Zinke, in a December 20 news release.

"We are very excited to declare the park open for business, just in time for the holidays when many tourists visit the Islands."

The National Park Service reports that it attracted more than a half a million visitors to the islands in 2016, spending about $70 million and supporting 900 jobs.

The national park covers nearly two-thirds of St. John and more than 5,000 acres of the adjacent Caribbean.

The US Virgin Islands have been a US territory since 1917, when the United States purchased the islands of St. John, St. Thomas and St. Croix from Denmark for $25 million. (Residents were granted US citizenship in 1927.)

Some 445 staffers from the park service, US Fish and Wildlife Service and US Forest Service joined with the park's permanent staff to clear debris, restore utility service and add guest facilities over the past three months, according to Virgin Islands National Park Acting Superintendent Darrell Echols.

"This was a huge undertaking," Echols said. "The park still has a large number of challenges ahead, such as removing 64 displaced vessels sunk within the park or washed upon the shore, and completing major repairs on utility systems, roads and several park houses."

The beaches are open

While all of the park's beaches have been inspected for underwater debris, visitors should check with park rangers about current conditions, be careful in the water, and note that not all mooring buoys have been repaired yet.

Nonetheless, there's cause for celebration for this tiny territory of about 100,000 people.

"Virgin Islands National Park is a key element of our beautiful landscape and an important visitor attraction here in the US Virgin Islands," said Beverly Nicholson-Doty, the islands' tourism commissioner.

"The significant milestone of the reopening of the Virgin Islands National Park is encouraging for our tourism industry as travelers experience our breathtaking beaches, inspirational hiking trails and picturesque backdrops," she said.