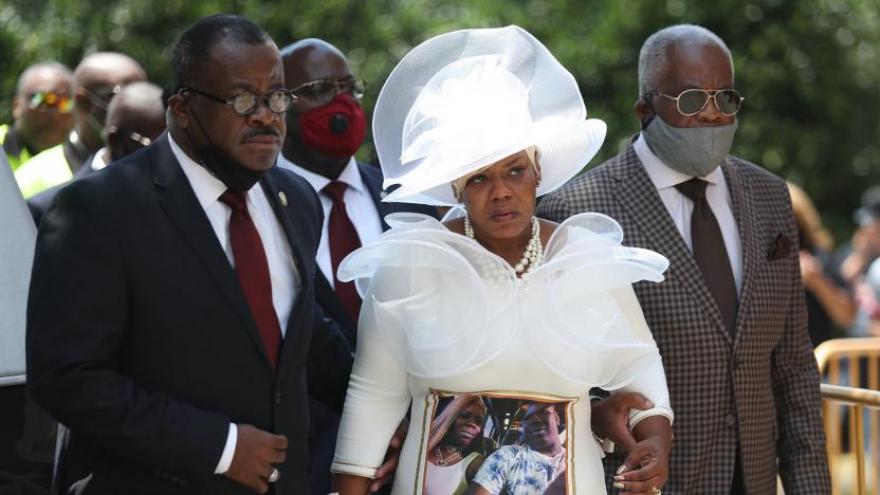 Pallbearers bring the remains of Rayshard Brooks to the Ebenezer Baptist Church for his funeral on June 23, 2020 in Atlanta, Georgia.

(CNN) -- Rayshard Brooks was remembered at his funeral Tuesday as a smiling, oft-dancing, hard-working father brought down by a racist legal system of imprisonment, probation and police violence.

A private funeral service was held in Atlanta at historic Ebenezer Baptist Church, where the Rev. Martin Luther King Jr. served as a co-pastor from 1960 until his assassination in 1968.

Ambrea Mikolajczyk, who runs a construction company in Toledo, Ohio, where Brooks worked last year, said he biked to work every day as he tried to overcome the restrictions placed on him while on probation.

"Ray had overcome his circumstances. He was working hard to become the best provider, caretaker, community builder, father, husband, son, brother and relationship agent he could possibly be," she said. "The justice system and systemic racism that exists made it fairly impossible for him to try to live a prosperous life well after he had paid his debt."

In one instance, a coworker's car broke down and Brooks got off his bike and walked alongside the coworker for two hours.

"That's the type of man Ray was. He looked out for everyone," she said.

The funeral comes more than a week after the 27-year-old father was shot and killed by an Atlanta police officer after he fought with police and tried to flee during an attempted drunken driving arrest. The shooting, amid nationwide protests against systemic racism and police brutality, has led to the resignation of the police chief and criminal charges against the officer who killed him and another officer on scene.

King's daughter, the Rev. Bernice A. King, said that one of the things that touched her during the service was the power of love, and how we need love in this time.

"We are wrestling with a past of violence, we were founded in violence," she told CNN after the funeral.

"We are in a moment, a reckoning on whether we are going to disassociate ourselves from that kind of past and create what my father called the beloved community, where you recognize the humanity of people and you respect the dignity and worth of an individual and you ensure that there is equity and justice for all people."

The Rev. Raphael G. Warnock, the senior pastor at Ebenezer Baptist Church and a Democratic candidate for US Senate, noted Brooks was killed while running away and George Floyd was killed by police while complying.

"If your skin is the weapon and your complexion is the crime, what do you do to stay alive? Comply like George Floyd? Or run like Rayshard Brooks? I'm not asking for a friend, I'm asking for myself and my nieces and my nephews and my children," he said.

"This country has become too accustomed and comfortable with black people dying. That's what we mean when we say Black Lives Matter. It is a way of saying see our humanity."

King told funeral-goers she knew the pain of growing up without a father.

"Rayshard Brooks' life matters and he should have been able to live, to enjoy his family and watch his kids grow into adulthood," she said. "And the officers should have gone home that night without blood on their hands."

King said that it was especially troubling that Brooks was killed in a city that is home to "civil and human rights."

"This happened in the city that has been known as the black mecca. This happened in the city whose grounds are known for America and the world warrior of peace, my daddy, Martin Luther King, Jr., who taught us that true peace is not merely the absence of tension but it is the presence of justice. Therefore, there can be no peace in Atlanta nor anywhere in our nation where there is no justice."

King then raised her fist in the air while saying, "No justice, no peace."

Media mogul Tyler Perry has offered to pay for the funeral arrangements, according to Brooks' family attorney Chris Stewart and a news release.

Struggle to overcome imprisonment and probation

In an interview in February with Reconnect, a company that focuses on fighting incarceration, Brooks spoke openly about his time spent in prison and his struggle to care for his family while on probation.

"I just feel like some of the system could, you know, look at us as individuals," he said. "We do have lives, you know, was just a mistake we made, you know, and, you know, not, not just do us, as if we are animals. You know, lock us away."

Brooks told the interviewer he was arrested for false imprisonment and financial credit card fraud. He said his public defender told him he could get 10 years, so he pleaded guilty and was sentenced to a year in prison.

Nationwide, 4.5 million people are on probation or parole, and African-Americans make up 30 percent of those on community supervision.

As part of a plea deal, Brooks pleaded guilty in 2014 to charges of false imprisonment, simple battery/family, simple battery and felony cruelty/cruelty to children, and he was sentenced to one year in prison and six years on probation, according to court records. Two years later, he was sent back to prison for 12 months for violating his probation.

The Rev. Warnock said that the video of Brooks' comments was heartbreaking.

"He talks about how hard it is to come back, to recover when you return. He was trying. He had been digging his way back. And he knew that night that he could very well lose his liberty," Warnock said. "Afraid of losing his liberty, he lost his life, running from a system that too often makes slaves out of people.

"This is much bigger than the police. This is about a whole system that cries out for renewal and reform."

Other speakers spoke about his personality and love of music and dancing. Rochelle Gooden, his mother-in-law, said Brooks had a wide smile and fondly recalled his love for old-school music like Al Green.

His cousin, Jymaco Brooks, said Rayshard Brooks was the type of person who would always make you laugh.

"All he wanted to do was smile, crack jokes, dance a little bit and live," he said.

Brooks died after he was shot in the back on June 12 by Atlanta police officer Garrett Rolfe.

The incident began when officer Devin Brosnan responded to a Wendy's restaurant to find Brooks asleep in his car in the drive-through lane.

After a calm, lengthy interaction, Brooks failed a sobriety test, and when police moved to handcuff him, he resisted and tried to fight off the officers. During the fight, Brooks took one of the officers' Tasers, according to the Georgia Bureau of Investigation.

Video of the incident shows him running away, and he appears to turn and point the Taser in the direction of one of the officers. The officer, Rolfe, then fired his handgun three times, striking Brooks twice in the back and also hitting a nearby occupied vehicle.

Rolfe was fired and Brosnan was placed on administrative duty

Fulton County District Attorney Paul Howard charged Rolfe with felony murder and 10 other accounts and charged Brosnan with aggravated assault for allegedly standing on Brooks' shoulders as he lay dying.

Rolfe's attorneys said that he fired the fatal shots "fearing for his safety and the safety of the civilians around him." Brosnan said that he suffered a concussion during the fight and that he stepped on Brooks for a short period of time in the immediate, disorienting aftermath of the shooting.