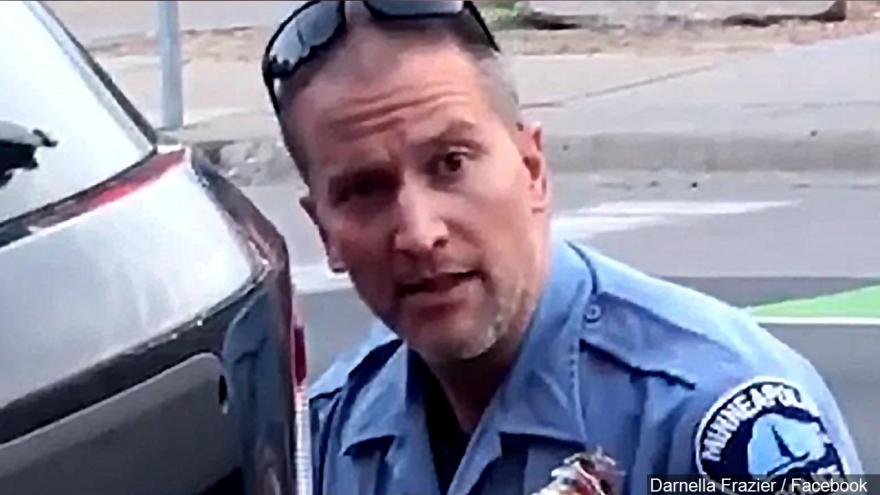 Buildings burn as protesters gather outside the 3rd Precinct.

Chauvin is the officer seen in a video with his knee on George Floyd's neck. He faces charges of third-degree murder and manslaughter, according to Hennepin County Attorney Mike Freeman.

The complaint lists the two counts the officer faces as well as a detailed statement of probable cause, which outlines the moments that led to Floyd's arrest and subsequent death.

State of Minnesota County of Hennepin

The Complainant submits this complaint to the Court and states that there is probable cause to believe Defendant committed the following offense(s):

Charge Description: That on or about May 25, 2020, in Hennepin County, Minnesota, Derek Michael Chauvin caused the death of George Floyd by perpetrating an act eminently dangerous to others and evincing a depraved mind, without regard for human life.

Charge Description: That on or about May 25, 2020, in Hennepin County, Minnesota, Derek Michael Chauvin caused the death of George Floyd by his culpable negligence, creating an unreasonable risk and taking a chance of causing death or great bodily harm to George Floyd.

On May 25, 2020, someone called 911 and reported that a man bought merchandise from Cup Foods at 3759 Chicago Avenue in Minneapolis, Hennepin County, Minnesota with a counterfeit $20 bill. At 8:08 p.m., Minneapolis Police Department (MPD) Officers Thomas Lane and J.A. Kueng arrived with their body worn cameras (BWCs) activated and running. The officers learned from store personnel that the man who passed the counterfeit $20 was parked in a car around the corner from the store on 38th Street.

BWC video obtained by the Minnesota Bureau of Criminal Apprehension shows that the officers approached the car, Lane on the driver's side and Kueng on the passenger side. Three people were in the car; George Floyd was in the driver's seat, a known adult male was in the passenger seat and a known adult female was sitting in the backseat. As Officer Lane began speaking with Mr. Floyd, he pulled his gun out and pointed it at Mr. Floyd's open window and directed Mr. Floyd to show his hands. When Mr. Floyd put his hands in the steering wheel, Lane put his gun back in its holster.

Once handcuffed, Mr. Floyd became compliant and walked with Officer Lane to the sidewalk and sat on the ground at Officer Lane's direction. In a conversation that lasted just under two minutes, Officer Lang asked Mr. Floyd for his name and identification. Officer Lane asked Mr. Lloyd if he was "on anything" and explained that he was arresting Mr. Lloyd for passing counterfeit currency.

Officers Kueng and Lane stood Mr. Floyd up and attempted to walk Mr. Floyd to their squad car (MPD 320) at 8:14 p.m. Mr. Floyd stiffened up, fell to the ground, and told the officers he was claustrophobic.

MPD Officers Derek Chauvin (the defendant) and Tou Thoa then arrived in a separate squad car.

The officers made several attempts to get Mr. Floyd in the backseat of squad 320 from the driver's side. Mr. Floyd did not voluntarily get in the car and struggled with the officers by intentionally falling down, saying he was not going in the car, and refusing to stand still. Mr. Floyd is over six feet tall and weighs more than 200 pounds.

While standing outside the car, Mr. Floyd began saying and repeating that he could not breathe. The defendant went to the passenger side and tried to get Mr. Floyd into the car from that side and Lane and Kueng assisted.

The defendant pulled Mr. Floyd out of the passenger side of the squad car at 8:19:38 p.m. and Mr. Floyd went to the ground face down and still handcuffed. Kueng held Mr. Floyd's back and Lane held his legs. The defendant placed his left knee in the area of Mr. Floyd's head and neck. Mr. Floyd said, "I can't breathe" multiple times and repeatedly said, "Mama" and "please," as well. The defendant and the other two officers stayed in their positions.

The officers said, "You are talking fine" to Mr. Floyd as he continued to move back and forth. Lane asked, "should we roll him on his side?" and the defendant said, "No, staying put where we got him." Officer Lane said, "I am worried about excited delirium or whatever." The defendant said, "That's why we have him on his stomach." None of the three officers moved from their positions.

BWC video shows Mr. Floyd continue to move and breathe. At 8:24:24, Mr. Floyd stopped moving. At 8:25:31 the video appears to show Mr. Floyd ceasing to breathe or speak. Lane said, "want to roll him on his side." Kueng checked Mr. Floyd's right wrist for a pulse and said, "I couldn't find one." None of the officers moved from their positions.

At 8:27:24, the defendant removed his knee from Mr. Floyd's neck. An ambulance and emergency medical personnel arrived, the officers placed Mr. Floyd on a gurney, and the ambulance left the scene. Mr. Floyd was pronounced dead at Hennepin County Medical Center.

The Hennepin County Medical Examiner (ME) conducted Mr. Floyd's autopsy on May 26, 2020. The full report of the ME is pending but the ME has made the following preliminary findings. The autopsy revealed no physical findings that support a diagnosis of traumatic asphyxia or strangulation. Mr. Floyd had underlying health conditions including coronary artery disease and hypertensive heart disease. The combined effects of Mr. Floyd being restrained by the police, his underlying health conditions and any potential intoxicants in his system likely contributed to his death.

The defendant had his knee on Mr. Floyd's neck for 8 minutes and 46 seconds in total. Two minutes and 53 seconds of this was after Mr. Floyd was non-responsive. Police are trained that this type of restraint with a subject in a prone position is inherently dangerous.

Defendant is in custody.

Complainant requests that Defendant, subject to bail or conditions of release, be:

(1) arrested or that other lawful steps be taken to obtain Defendant's appearance in court; or

(2) detained, if already in custody, pending further proceedings; and that said Defendant otherwise be dealt with according to law.