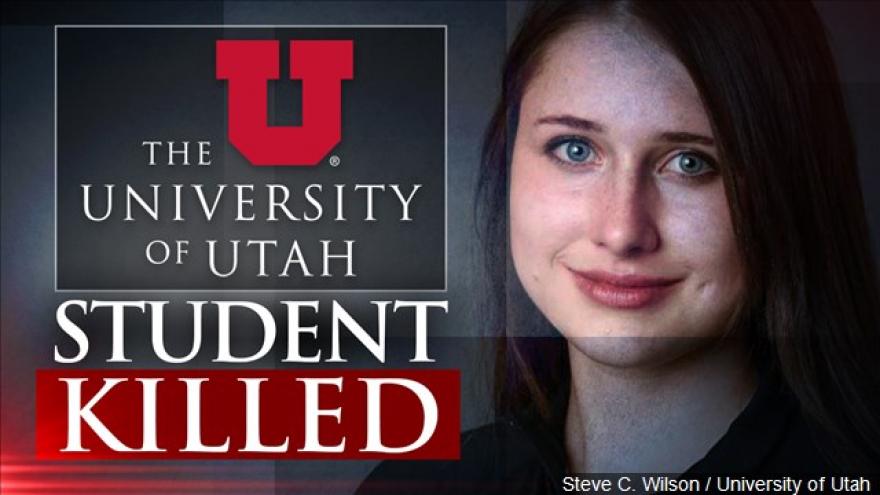 University of Utah student and track athlete Lauren McCluskey was shot and killed on campus by former boyfriend, Melvin Rowland. McCluskey had filed a police report against Rowland after she learned he was a sex offender and broke off the relationship. Photo courtesy Steve C. Wilson / University of Utah

SALT LAKE CITY (AP) — A University of Utah student and track athlete who was shot and killed on campus by a former boyfriend had filed a police complaint against him after she learned he was a sex offender and broke off the relationship, authorities said Tuesday.

Investigators had been working to build a case after receiving the report from 21-year-old Lauren McCluskey, a senior from Pullman, Washington, university police chief Dale Brophy said. He declined to disclose further details on the report.

McCluskey was found shot in a car Monday night near on-campus student housing. Her attacker, 37-year-old Melvin Rowland, killed himself overnight at a church when police tracked him down after linking him to the killing through a description, clothing and evidence at the scene, authorities said.

The victim's mother, Jill McCluskey, said her daughter had filed a harassment complaint after breaking up with Rowland.

Lauren McCluskey had dated Rowland for about a month then ended the relationship on Oct. 9 when she learned he had lied about his age, name and criminal history, Jill McCluskey said in a statement. It wasn't clear how the two met.

Jill McCluskey said she had been talking on the phone with her daughter as she returned from a night class and heard her yell, "'No, no, no!'" A few minutes later, a woman picked up the phone and said all of Lauren McCluskey's belongings were on the ground.

"I thought she might have been in a car accident," Jill McCluskey said. "That was the last I heard from her."

Rowland spent nearly a decade in prison after pleading guilty to trying to lure an underage girl online and attempted sex abuse charges, according to court records.

He was charged with two separate crimes in September 2003, said Paul Amann, the prosecutor on the case.

Rowland had been caught in an online sex crimes sting when a police officer posed as a 13-year-old girl. After he was charged, a woman came forward to report he had sexually assaulted her after a separate online meeting a few days earlier.

"He was just out of control. He had no self-control," Amann said Tuesday.

Rowland pleaded guilty to enticing a minor over the internet and attempted forcible sex abuse in an agreement with prosecutors, records show. His defense attorney did not immediately return a call Tuesday seeking comment.

Rowland was released from prison in 2012 after serving eight years and has twice been sent back from halfway houses after violating his parole, Utah prison spokeswoman Kaitlin Felsted said. He was most recently paroled in April and was living on his own.

Rowland was prohibited from owning a gun on parole and it was unclear how he obtained one.

Initial reports of the shooting sparked panic on the Salt Lake City campus.  University officials ordered students to stay in place for about three hours as they searched for the gunman.

University of Utah student Jonas Woychick said he was playing pool when he got a message about an on-campus shooter. He and eight other students waited in a bathroom for two hours until they learned it was safe.

"I didn't know if this shooter was going for other people, or if he was just targeting one person," said Woychick, who is from Boise, Idaho.

Lauren McCluskey was majoring in communication and was excited to graduate next spring, said her mother, a professor at Washington State University, adding that her daughter was a Washington state high jump champion in high school and loved to sing.

"As a campus community, we share grief over this tragic loss of life," Watkins said in a statement.

Athletics Director Mark Harlan said counselors and psychologists were available to support McCluskey's teammates, coaches and friends. He said she was a proud Ute and an outstanding student-athlete.

"This isn't right," Harlan said. "I don't really have any words. My heart goes out to her family. ... When something like this happens, it defies any logic, any reason."