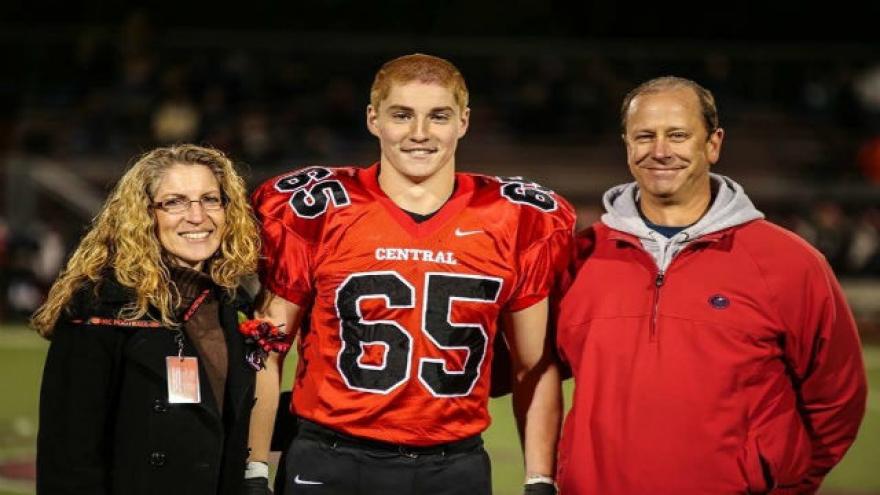 Twelve more members of Penn State\'s Beta Theta Pi fraternity have been charged in the death of pledge Timothy Piazza after prosecutors were able to recover deleted surveillance video from the night of his death -- video that shows the sophomore being given at least 18 drinks in 82 minutes. Photo courtesy Patrick Carns Photography

(CNN) -- Twelve more members of Penn State's Beta Theta Pi fraternity have been charged in the death of pledge Timothy Piazza after prosecutors were able to recover deleted surveillance video from the night of his death -- video that shows the sophomore being given at least 18 drinks in 82 minutes.

Nine members already charged in the case face no new charges. It means a total of 26 fraternity members are charged with various offenses stemming from Piazza's death.

The new defendants face charges that include involuntary manslaughter, assault, hazing and furnishing alcohol to minors, all related to additional alcohol hazing that prosecutors say was caught on cameras in the basement of the fraternity house in the Pennsylvania town of State College.

Piazza, 19, died after his first night pledging Beta Theta Pi, a fraternity that was supposed to be alcohol-free as a result of a suspension eight years ago. Surveillance footage previously played in court shows Piazza falling repeatedly, including down a flight of stairs, after the February 2 event.

Prosecutors previously believed that the basement cameras were not working, but Parks Miller said Monday that fraternity member Braxton Becker deleted the basement footage while police were in the house to collect it.

Becker is charged with tampering with evidence, obstructing justice and hindering apprehension. His attorney, Karen Muir, could not immediately be reached for comment.

"He deleted it in front of the police," Parks Miller said, adding that the forensic analysis showed Becker made "a series of deliberate commands" on the machine to delete the basement portion of the video.

The upstairs footage remained, revealing part of the hazing ritual, followed by several hours of Piazza stumbling and repeatedly falling.

"Piazza never obtained any of those drinks himself," Parks Miller said. "Brothers were coming over and giving it to him."

During the news conference to announce the new charges, Piazza's father, Jim, was trembling and fidgeting, at times shaking his head in anger.

"We have spent the last eight months wondering how this could happen," he said. "The visions of him lying in the hospital bed, battered and bruised and on life-support, looking as if he got hit by a tractor-trailer made no sense."

He referenced statements by the defendants, who said they did not know everything that had happened that night.

Jim Piazza said this son should have been returning home for Thanksgiving break this Friday, making this time especially painful for the family.

An attorney for one of the newly charged fraternity members said he is "flabbergasted" that the district attorney is filing more charges now.

"As a human, I have tremendous empathy for the tragedy of the situation," attorney Bill Brennan said. "As a lawyer, I don't see a crime here."

He added, "Sometimes tragedies just occur, and they're not crimes."