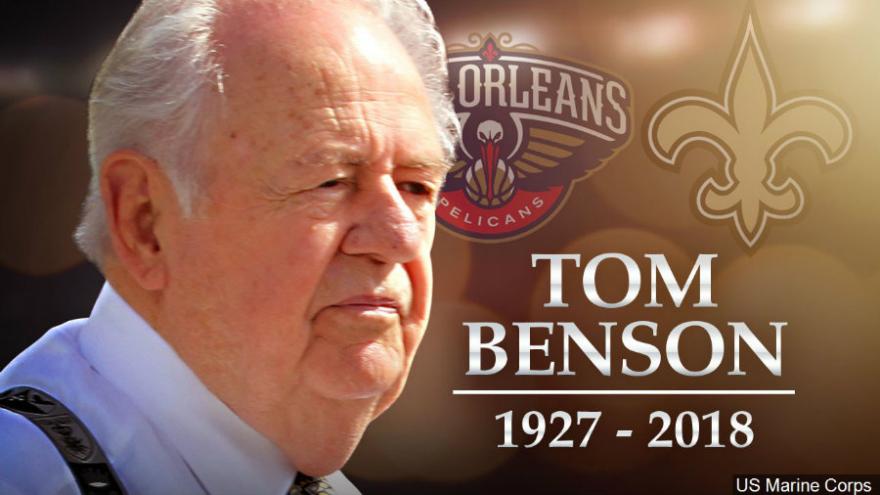 NEW ORLEANS, LA (WGNO)/CNN) -- It was a day that was both somber and celebratory as hundreds of high-profile politicians, athletes, friends and family gathered at St. Louis Cathedral for the funeral Mass of Saints and Pelicans owner Tom Benson.

Archbishop Gregory Aymond of the Archdiocese of New Orleans officiated much of the Mass. He said Tom Benson loved to tell the story of how he and his wife, Gayle Benson, met -- at St. Louis Cathedral.

"One day Tom came to an early Mass and Gayle was the lector," Aymond recalled. "He looked at her during that Mass and said, 'I have to meet her.' He’s persistent. And he did."

The community has been mourning the loss of a New Orleans icon for the past week. Benson, 90, died Thursday (March 15) after being hospitalized for several weeks with flu-like symptoms.

He was born on July 12, 1927 and graduated from St Aloysius High School and Loyola University.

Aymond reminded funeral-goers that Benson grew up poor. His parents could have never afforded tuition at St. Aloysius (now Brother Martin), but Benson got a scholarship.

He started young in the car business and amassed a personal fortune of nearly $3 billion by the end of his life.

But Benson was known as much for his wealth as he was for his philanthropy, having given millions of dollars to schools, hospitals, to Tulane University in its quest to build Tom Benson Field at Yulman Stadium, and to the NFL.

Benson also experienced a great deal of heartache -- the death of two wives and two adopted children and a fallout with his family in his later years -- but he remained a man of faith, Aymond said.

Big crowds gathered in the French Quarter after the funeral for a second line to celebrate his extraordinary life.