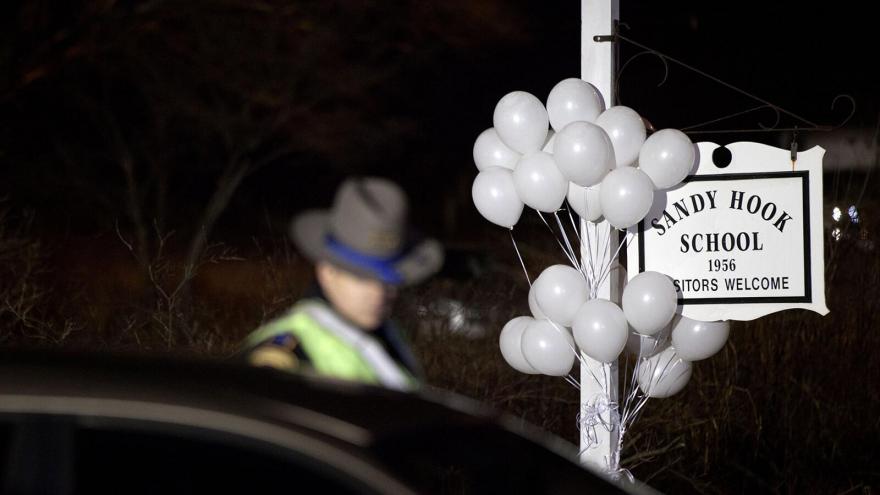 White balloons decorate the sign for the Sandy Hook Elementary School as a Connecticut State Trooper stands guard at the school's entrance in 2012 in Newtown, Connecticut.

Remington Arms Co. LLC and Remington Outdoors Co. Inc. -- collectively "Remington" -- offered $3.66 million each to nine plaintiffs relating to the shooting that killed 20 children and six adults in Newtown, Connecticut, according to separate offers of compromise.

In a statement, the lawyers for the victims' families say in part they will "consider their next steps."

In 2012, six adults and 20 children at Sandy Hook Elementary School were killed by Adam Lanza, who had earlier killed his mother, Nancy Lanza, in their home.

The families of nine slain children sued Remington in 2014.

Lawyers for the plaintiff contended that the company marketed rifles by extolling the militaristic qualities of the rifle and reinforcing the image of a combat weapon -- in violation of a Connecticut law that prevents deceptive marketing practices.

The US Supreme Court in 2019 decided not to take up an appeal by Remington, effectively allowing the suit to move forward.

In 2020 Remington filed for Chapter 11 bankruptcy protection for the second time in just over two years.

Any ultimate settlement related to the offers is subject to approval from the US bankruptcy court in Alabama, according to the documents.

An "important goal" of the suit "has been showing banks and insurers that companies that sell assault weapons to civilians are fraught with financial risk," plaintiffs' attorney Josh Koskoff said Wednesday, adding in part that financial institutions learned this when Remington filed for bankruptcy.

Koskoff credited two insurance companies that once did business with Remington for realizing that promoting the use of AR-15-style rifles "as weapons of war to civilians is indefensible."