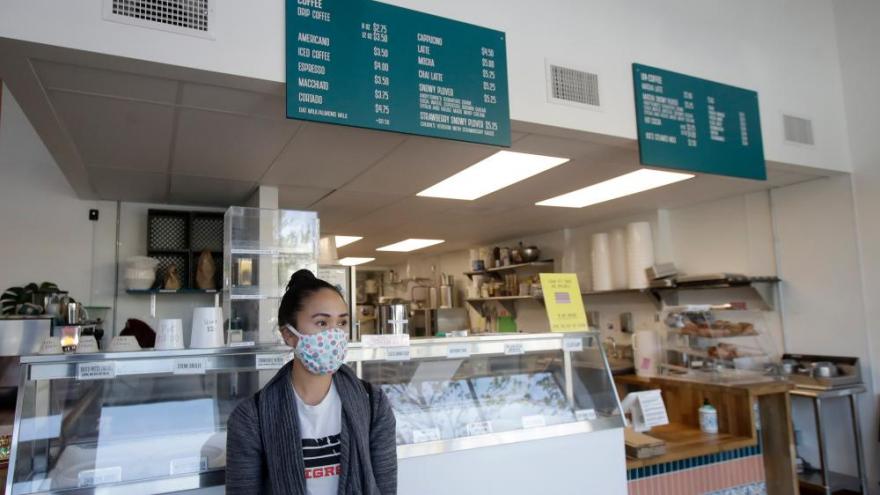 Rica Sunga-Kwan, owner of Churn Urban Creamery, wears a mask while interviewed at her shop in San Francisco on Thursday, April 23.

(CNN) -- Carlos Davis used to have about 200 clients drop by his CUT-ology barbershop in Albany, Georgia, every day.

On Friday, the first day he was allowed to reopen since the coronavirus pandemic, around 30 clients came in.

Wearing gloves, a construction face mask and a face shield, Davis said he was taking precautions to protect his staff and clients. A piece of paper on the door outlined the mandatory guidelines for clients, saying they must wear a mask and gloves in order to enter.

He's afraid of the virus, yes. But he also fears losing his haircutting business, and what that could mean for him.

Davis's decision to reopen comes as a number of states have begun to loosen stay-at-home restrictions -- even as the novel coronavirus continues to infect and kill people. Across the country, more than 950,000 people have tested positive for the virus and more than 54,000 have died.

Alaska Gov. Mike Dunleavy allowed salons and restaurants to reopen in most parts of the state Friday. Oklahoma allowed some personal-care businesses to reopen for appointments Friday as well. Even in California, some beaches that had been closed reopened for public use, though with limitations.

Georgia's reopening has been the most aggressive so far. Gov. Brian Kemp ordered the reopening of hair and nail salons, gyms, bowling alleys, tattoo studios and massage therapists on Friday, with theaters and restaurants to follow Monday. The reopenings come despite warnings from health experts, local mayors and even President Donald Trump. The influential Covid-19 model by the Institute for Health Metrics and Evaluation, for example, says social distancing should not be relaxed in Georgia until June 22.

Businesses that do reopen still must try to maintain social distancing and take steps to keep their staff and customers safe. But that is not always possible in businesses with such close contact.

Savannah Stafford is opening her salon in Savannah, but she conceded that maintaining six feet of distance is not possible between a hair stylist and a client.

"You can kind of distance between the next two people throughout the salon," Stafford said Friday, "but it's going to be difficult because we're so hands on."

The reopenings do not mean that things are returning to normal. Restaurants and hair and nail salons that do reopen will have to adjust their layouts, sanitation procedures and service methods to adjust to this new reality.

For example, Waffle House is planning to reopen in Georgia Monday with more distant seating arrangements, enhanced sanitizing protocols and masks on employees, CEO Walt Ehmer told CNN affiliate WSB. He said part of the decision to reopen was to allow employees to get back to earning money.

In Douglasville, Georgia, Eric Greeson said his family's barbershop had more business than they thought they would but not as much as they wished. By about 1:40 p.m. on Friday, he said the shop had nine clients, which was not that far off from a normal Friday.

He said he was "kind of shocked" by the governor's decision to reopen, but he decided to do so in part so he didn't fall behind his competition.

"You know, we figure if we don't open, the shop down the street will, and then we lose that business. So you're kind of stuck in a position where if they say you can open, you open," he said.

But Samuel Glickman, founder of the Georgia Barbers Network, said he won't reopen until he can get the necessary supplies to do so safely.

"The comfort level is not there for sure," he told CNN. "Right now, we're not safe. The items we need to open up our businesses and keep our clients safe, those items aren't accessible to us."

For some small business owners, decisions about reopening come down to mundane logistics.

Glickman said he wants customers and barbers to wash their hands often, but to do so, he needs to buy a huge amount of paper towels. He's tried ordering paper towels online, but because of shortages, they won't arrive for several weeks.

"Until I feel like I have at least 3 months worth of supplies, it doesn't make sense for me to open up because I want to be consistent with the protocols as well. If I run out of supplies, do I shut down again?" he said.

Customers' itch to visit nail salons has extended even to places that remain locked down. Mayor Becky Ames of Beaumont, Texas, had to issue an apology after a photo posted to social media showed her soaking her nails in a bowl at a nail salon on Tuesday, according to CNN affiliate KFDM.

Nail salons in Texas remain closed by the state's stay-at-home order. However, Ames and the nail salon owner told KFDM that the mayor was not having her nails done but was "soaking them in acetone to remove the powdered nails to avoid infection."

"I had them put on several weeks ago and they hurt. I was trying to get them off and I texted my nail lady. She said the only way to get them off is with a solution. You have to do it a special way," Ames told KFDM.

The mayor said she had arranged to pick up the solution at the salon door so she could take it home and remove the artificial nails. She said the owner had her come in for a few minutes to show her how to do the process, and that they were alone, both wearing masks and at least six feet apart, according to KFDM.

Ames issued an apology on Thursday for entering the nail salon, calling it a "lapse in judgement."

Dates of reopenings ahead

In addition to Georgia, several states have plans to loosen restrictions in the days ahead.

In Alaska, hair salons can only admit customers by reservation, and restaurants will have to keep distances between tables and can't exceed 25% of their normal capacity when they reopen Friday. The city of Anchorage is delaying the new rules until Monday.

In Montana, which has had just 448 confirmed cases, retail businesses can become operational on or after Monday if they adhere to requirements to limit capacity and maintain strict physical distancing. Restaurants, bars, breweries and distilleries can begin providing some in-establishment services on May 4.

Oklahoma will allow restaurants, movie theaters, sporting venues and gyms to reopen May 1 if they maintain "strict social distancing and sanitation protocols." Bars, schools and sporting events, however, will still be closed.

In Texas, the state's stay-at-home order ends at the end of April. Texas Gov. Greg Abbott said that a group of medical and economic experts will guide him through a series of incremental steps aimed at slowly reopening the state's economy in early May.

Still, some states led by Democratic governors have also moved to loosen restrictions. In Minnesota, Gov. Tim Walz says he will allow some businesses to reopen beginning Monday.

Hawaii lifted certain restrictions today while continuing to review others, Gov. David Ige said. Beaches are open for exercising, but people cannot loiter on the beach and must maintain social distance. Elective surgeries are also allowed to take place as long as there is enough capacity, he said.

And in Colorado, Gov. Jared Polis said the state's stay-at-home order will be replaced Monday by a less restrictive "safer at home" phase. Starting Monday, retail businesses with curbside delivery can reopen and elective medical procedures can resume. Businesses such as personal training and dog grooming can reopen with social distancing.