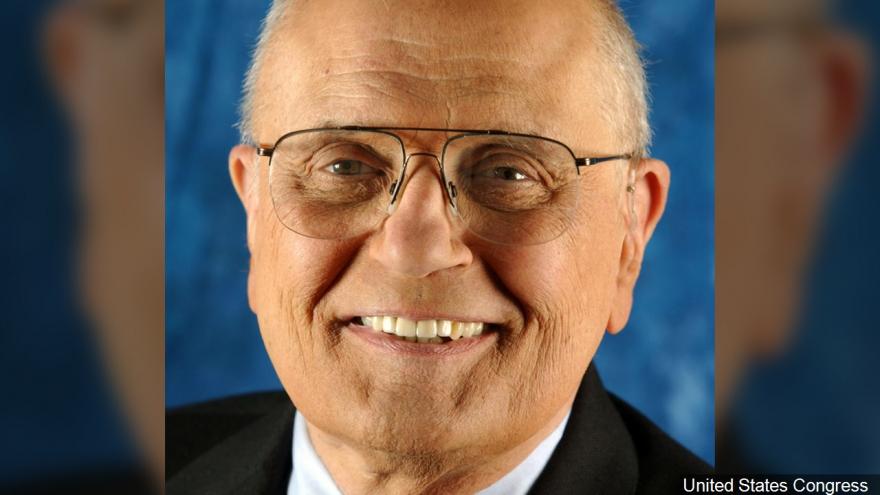 John David Dingell Jr. was an American politician who served as a member of the United States House of Representatives from December 13, 1955, until January 3, 2015, Photo Date: Undated
Originally Published: 18 DEC 19 22:54 ET
By Caroline Kelly and Allie Malloy, CNN

(CNN) -- President Donald Trump attacked Democratic Rep. Debbie Dingell and her late husband, Rep. John Dingell, during a rally on Wednesday, implying the former congressman was "looking up" from hell.

"Debbie Dingell, that's a real beauty," Trump said of the congresswoman, noting he was watching her on television during impeachment proceedings.

Trump said that he gave the family the "A-plus treatment" after John Dingell died, and that the congresswoman, who now holds his seat in the House, told Trump during an emotional call following John Dingell's funeral that her husband would have been "thrilled" by the respect shown for him during his funeral and "he's looking down" on the ceremonies.

"Maybe he's looking up," Trump said, drawing some moans and groans from those in Battle Creek, Michigan, about two hours away from Debbie Dingell's district. "Maybe, but let's assume he's looking down."

Trump's comment about John Dingell, the longest ever serving congressman, fell mostly flat on a crowd in an important swing state that has long revered the former dean of the House. John Dingell was an iconic figure in Michigan who was admired across party lines, and was one of the most popular political figures in the state during his lifetime.

Michigan was key to Trump's election in 2016 and appealing to Midwestern voters like those in the Great Lakes State will be important in his quest to hold onto the White House.

Debbie Dingell responded on Twitter to Trump's attacks on Wednesday, accusing him of sharpening her grief going into the holidays without her husband.

"Mr. President, let's set politics aside," she tweeted. "My husband earned all his accolades after a lifetime of service. I'm preparing for the first holiday season without the man I love. You brought me down in a way you can never imagine and your hurtful words just made my healing much harder."

Dingell's fellow Michigan representative, Republican Rep. Fred Upton, said late Wednesday night that "there was no need to 'dis' him in a crass political way. Most unfortunate and an apology is due."

Appearing on CNN's "New Day" Thursday morning, Debbie Dingell again emphasized her desire to not politicize her husband's death but insisted she wasn't going to let Trump's attacks intimidate her.

Trump's rally insults marked the second time in five days that he has mentioned John Dingell's funeral while disparaging the congresswoman, who has supported impeachment.

"The last time I spoke to Debbie Dingell was her call thanking me for granting top memorial and funeral service honors for her then just departed husband, long time Congressman John Dingell," Trump tweeted Saturday. "Now I watch her ripping me as part of the Democrats Impeachment Hoax. Really pathetic!"

Dingell told CNN's Brooke Baldwin on Monday that she was "really hurt" by Trump's tweet.

"It really felt awful, you want to know the truth," she said, her voice becoming briefly emotional. "I'm already missing him."

She added that she hadn't wanted her husband's funeral "to become political."

"I was very grateful for his call, he really did care about my loss," Dingell said of Trump. "And so it really hurt. To say to you that that didn't shake me and didn't bother me would be a lie."