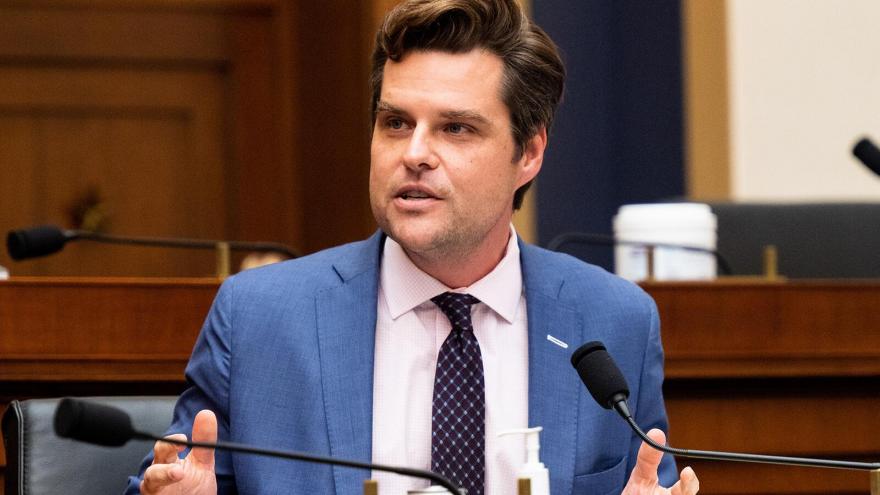 Rep. Matt Gaetz on Tuesday denied that he had a sexual relationship with a 17-year-old. Gaetz is shown speaking at a House Judiciary Committee markup hearing.

The Florida Republican said in a statement to CNN that "no part of the allegations against me are true" and that the claims were being pushed by people who are targets of an "ongoing extortion investigation."

"Over the past several weeks my family and I have been victims of an organized criminal extortion involving a former DOJ official seeking $25 million while threatening to smear my name. We have been cooperating with federal authorities in this matter and my father has even been wearing a wire at the FBI's direction to catch these criminals," Gaetz claimed.

"The planted leak to the New York Times tonight was intended to thwart that investigation. No part of the allegations against me are true, and the people pushing these lies are targets of the ongoing extortion investigation. I demand the DOJ immediately release the tapes, made at their direction, which implicate their former colleague in crimes against me based on false allegations," Gaetz added.

In an interview on Fox News, Gaetz strongly denied the accusations.

"The person doesn't exist. I have not had a relationship with a 17-year-old. That is totally false. The allegation is, as I read in the New York Times is, I have traveled with some 17-year-old in some relationship. That is false and records will bear that out to be false," Gaetz said.

Gaetz also accused a former Department of Justice prosecutor, David McGee, of attempting to extort him and his family over the allegations.

McGee did not immediately respond to a request for comment by CNN, but in an interview with The Washington Post, he denied that he is involved in attempts to extort Gaetz or is connected to the DOJ investigation.

"It is completely false. It's a blatant attempt to distract from the fact that he's under investigation for sex trafficking of minors," McGee told the Post. "I have no connection with that case at all, other than, one of a thousand people who have heard the rumors."

"If there is a tape, play the tape," McGee told the newspaper. "There is nothing on that tape that is untoward. It is a pleasant conversation of a dad concerned about his son and the trouble his son was in."

The statement came after the New York Times reported that three people briefed on the matter said that the US Department of Justice's investigation is part of a broader investigation.

Federal authorities are investigating Gaetz as part of a broader probe into trafficking allegations against another Florida politician, a person briefed on the matter told CNN.

That politician is Joel Greenberg, a former county official in Central Florida who was arrested last year on charges that include sex trafficking of a minor. Greenberg has pleaded not guilty and is set to go on trial.

The person said the probe of Gaetz was opened in the closing months of the Trump-era Justice Department, and is an outgrowth of the Greenberg investigation. Public integrity prosecutors in Washington, DC, and Tampa are overseeing the Gaetz investigation, the person added.

The people who spoke to the Times said that as part of this broader probe, investigators are looking at whether Gaetz, a high profile ally of former President Donald Trump, violated federal sex trafficking laws -- something that could carry severe legal repercussions. No charges have been filed against Gaetz, the Times reported.

Gaetz told the newspaper in an interview that his lawyers had been in contact with the Justice Department.

"I only know that it has to do with women," Gaetz told the Times. "I have a suspicion that someone is trying to recategorize my generosity to ex-girlfriends as something more untoward."

Elected in 2016, Gaetz rose to national prominence in recent years as one of Trump's most vocal defenders.

This story has been updated with additional comment from Gaetz and the FBI in Jacksonville.