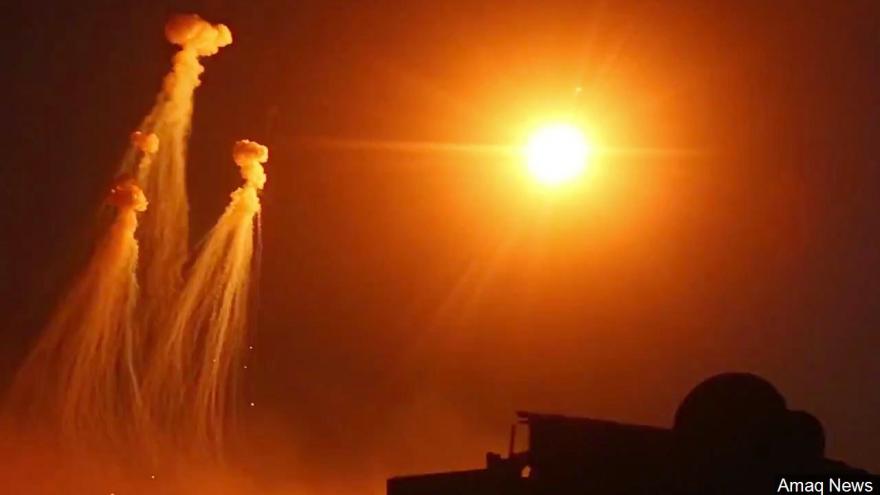 (CNN) -- A newly released report charges that the US-led coalition killed more than 1,600 civilians in Raqqa over the course of several months in 2017 during its campaign to eradicate ISIS from the Syrian city.

The report, released Thursday by Amnesty International and Airwars, found that US, UK and French airstrikes and US artillery strikes killed or injured thousands of civilians from June to October 2017.

A coalition analysis of civilian casualties does not match the report's findings.

"Many of the cases documented by Amnesty International likely amount to violations of international humanitarian law and warrant further investigation," the report states.

"Thousands of civilians were killed or injured in the US-led coalition's offensive to rid Raqqa of IS, whose snipers and mines had turned the city into a death trap. Many of the air bombardments were inaccurate and tens of thousands of artillery strikes were indiscriminate, so it is no surprise they killed and injured many hundreds of civilians," Donatella Rovera, Senior Crisis Response Adviser at Amnesty International, said in a news release about the report.

Col. Scott Rawlinson, a coalition spokesman, said there were "69 credible allegations out of Raqqa, resulting in 318 killed," according to their records. He noted that there were still allegations under investigation. Amnesty International had provided them with 86 new allegations, Rawlinson said, "43 of which had already been assessed as credible and previously reported or were deemed not credible because the allegation did not corroborate with our strike records." He said they have requested additional information on the other 43 allegations.

"Any unintentional loss of life during the defeat of Daesh (ISIS) is tragic. However it must be balanced against the risk of enabling Daesh to continue terrorist activities, causing pain and suffering to anyone they choose," Rawlinson said in a statement. "The Coalition takes all reasonable measures to minimize civilian casualties."

Amnesty International and Airwarshave called upon the coalition forces to acknowledge the scope of the reportedcivilian casualties and "to put in place an independent, impartial mechanism to effectively and promptly investigate reports of civilian harm, including violations of international humanitarian law, and make the findings public."

According to the report, the findings are based on nearly two years of investigations, including months of research on the ground in Raqqa and analysis of satellite images and open-source evidence like social media posts.

The Raqqa report comes a day after the release of a UN report that found Afghan government, US and international forces have been responsible for more civilian deaths in Afghanistan in the first three months of 2019 than the Taliban and ISIS, though overall civilian casualties were down in Afghanistan during that same period.

It is the first time since the UN Assistance Mission in Afghanistan began documenting civilian deaths and injuries in 2009 that deaths caused by pro-government forces surpassed those caused by insurgent groups.