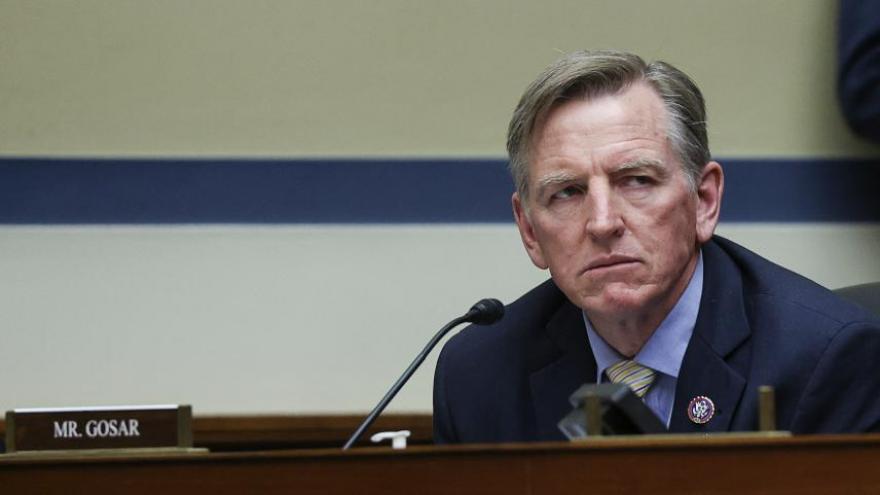 Republican Rep. Paul Gosar posted a photoshopped anime video to his Twitter and Instagram accounts showing him appearing to kill Democratic Rep. Alexandria Ocasio-Cortez and attacking President Joe Biden. Gosar is shown here at a House Oversight and Reform Committee hearing in Washington, DC, on May 12, 2021.

Ocasio-Cortez tweeted in response Monday saying a "creepy member" of the House had "shared a fantasy video of him killing me."

"And he'll face no consequences bc @GOPLeader cheers him on with excuses," the New York Democrat added.

As part of the initial tweet, Gosar asked, "Any anime fans out there?"

He also shared a link to the video.

Gosar is portrayed as a cartoon anime-type hero and is seen attacking a giant with Ocasio-Cortez' face with a sword from behind. The giant can then be seen crumbling to the ground.

Another scene shows Gosar flying through the air, swinging two swords at a character with President Biden's face.

Gosar did not respond to CNN's request for comment seeking an explanation for the video and its meaning.

Gosar's Digital Director, Jessica Lycos, said in a statement to The Washington Post on Monday night, "Everyone needs to relax."

Calls to House Minority Leader Kevin McCarthy have also not been returned.

Twitter said Monday evening that the video violated its rules on "hateful conduct" but did not remove the video, instead affixing a label to it that reads, "Twitter has determined that it may be in the public's interest for the Tweet to remain accessible."

Instagram does not appear to have taken any action on the video, and the company did not respond to CNN's request for comment Monday night.

Gosar, a Republican congressman from Arizona, voted against certifying the election for Biden, and has said that Ashli Babbitt, who was shot at the capitol on January 6 had been "executed" and that "(t)he Capitol Police officer that did that shooting appeared to be hiding, lying in wait and then gave no warning before killing her."

Several law enforcement agencies including the Justice Department have cleared that officer of any wrong doing in the shooting.