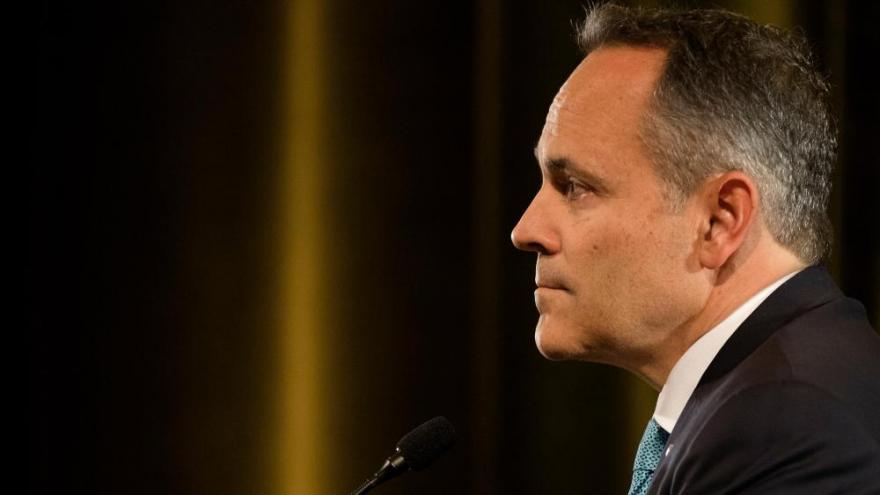 In a fight to keep his job, Republican Gov. Matt Bevin requested that all 120 counties recheck results from the election, which showed him trailing Democratic state Attorney General Andy Beshear by more than 5,000 votes. CREDIT: Albert Cesare/The Cincinnati Enquirer/AP

"We're going to have a change in the governorship based on the vote of the people," Bevin said at a news conference.

The concession comes after Bevin requested all 120 counties in the state recheck the results from last week's gubernatorial election. That recanvass showed Beshear still leading over Bevin.

"I'm not going to contest these numbers that have come in," Bevin said Thursday.

"I truly wish the attorney general well as the next governor of this state as he assumes these responsibilities," Bevin said. Bevin said his team has already been working with Beshear's and that he expects a smooth transition.

"I love the fact that we're blessed to live in a nation where things do transition in ways that much of the world wishes they had," he said.

Beshear said at a news conference he appreciated Bevin's concession, which he noted came quickly after the recanvass.

"The race is now officially over," Beshear said, "which means we can look forward and we can move forward."

Beshear was elected attorney general of Kentucky in 2015 and is the son of Steve Beshear, Bevin's predecessor.

The governor-elect tweeted: "It's official - thank you Kentucky. @GovMattBevin and his team have already begun a smooth transition. It's time to get to work!"

A Democratic victory in Kentucky, a state Donald Trump carried by 30 percentage points in the 2016 election, could be seen as an ominous sign for the President heading into his 2020 reelection bid. The result shows that Trump wasn't able to carry his preferred candidate over the finish line. Bevin had the strong backing of the President, and Trump held a rally in Lexington, Kentucky, the night before the election.

Bevin, elected governor in 2015, has faced backlash for seeking to undercut the state's Medicaid expansion and calling teachers "selfish" and accusing them of a "thug mentality" when they protested after he threatened to cut their pensions.

Bevin requested a recanvass after the results from last week's election showed Bevin trailing Beshear by more than 5,000 votes.

The recanvass began on Thursday morning. Unlike a standard recount of votes, a recanvass is a reprint of the receipts from voting machines to check for reporting or clerical errors. After ballots are scanned, the machine tabulates those votes and prints out a receipt with the total.

During the recanvass, those receipts were reprinted and checked again to make sure they were reported properly. It's not uncommon for some clerical errors to occur during the initial vote tabulation.

Kentucky law does not allow for a recount in a gubernatorial general election, but a campaign may request a recanvass of the votes with the secretary of state. There is no threshold or margin requirement for a recanvass.

Bevin previously told CNN affiliate WKYT: "It's not likely to change a lot numerically, but you have to go through this as a first step ... to make sure the numbers that were written down and communicated are accurate." He said his office is also preparing for Beshear to assume the governorship.

"There are very good odds, he could be the next governor -- no question about it," Bevin told WKYT. "Right now, he is numerically ahead and would seemingly be the next governor, and if that is corroborated and held up through this process, I'll be his number one cheerleader."

Representatives from both political parties and the media were allowed to be present for the recanvass.