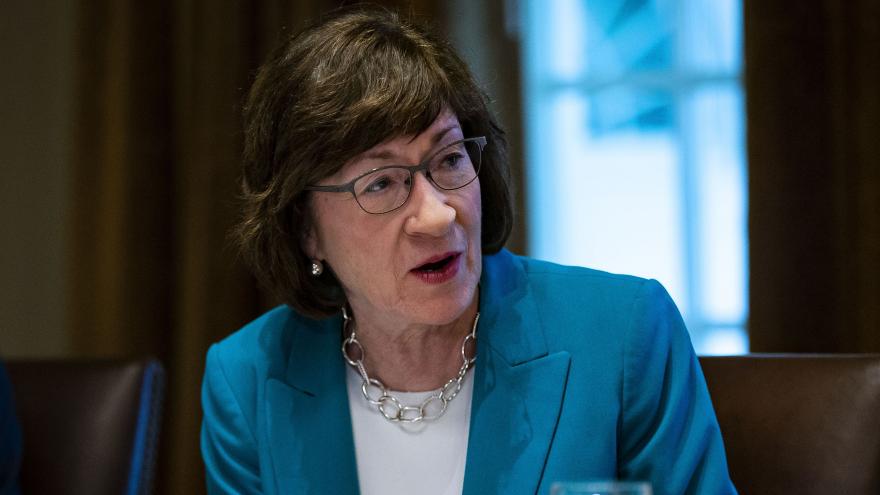 (CNN) -- Republican Sen. Susan Collins said Monday that she is "open to witnesses" in an upcoming Senate impeachment trial, but said it is "premature to decide who" might be called.

"I am open to witnesses. I think it's premature to decide who should be called until we see the evidence that is presented and get the answers to the questions that we senators can submit through the Chief Justice to both sides," Collins, a moderate Republican from Maine who will be closely watched as a potential swing vote during the trial, said during an interview with Maine Public Radio.

The question of whether there will be witnesses during a Senate trial has been the subject of intense speculation in Washington.

Senate Majority Leader Mitch McConnell said ahead of the holiday recess that the Senate is at an "impasse" about setting the rules of the trial, leaving the status of the trial in limbo as lawmakers left Washington until the new year.

But a number of Republican senators have already indicated they are beginning to see the benefit of keeping the process short, leaving out witnesses and instead, simply laying out the facts with a presentation from House managers and the White House.

McConnell has argued, however, that the Democratic leader's request is a break from past precedent established in the Senate impeachment trial of former President Bill Clinton.

In remarks on the Senate floor prior to recess, McConnell said, referring to that trial, "We divided the process into two stages. The first resolution passed unanimously before the trial began. It laid initial groundwork, such as scheduling, and structured early steps like the opening arguments. Mid-trial questions such as witnesses would be left until the middle of the trial, when senators could make more informed judgments."

"All 100 senators -- including me, Sen. Schumer, and a number of our colleagues on both sides who were here in 1999 -- endorsed that first resolution as a bipartisan, minimalist first step," McConnell added.

Still, in an interview with "Fox and Friends" earlier this month, McConnell noted that "we haven't ruled out witnesses."

In her interview with Maine Public Radio, Collins spoke approvingly of the way the trial was conducted during the Clinton impeachment, saying, "I think that the model and the precedent established by the trial for President Clinton is one that our leaders should take a hard look at."

Collins said, "I have shared with my colleagues my belief that the Clinton approach, the approach to the Clinton trial worked well."

The Maine Republican also said, though, that "it is inappropriate, in my judgment, for senators on either side of the aisle to prejudge the evidence before they have heard what is presented to us," and voiced criticism of McConnell for, in her words, "saying that he's taking his cues from the White House."

Collins continued: "I have heard Democrats like Elizabeth Warren, saying that the President should be impeached, found guilty, and removed from office. I've heard the Senate Majority leader saying that he's taking his cues from the White House. There are senators on both sides of the aisle, who, to me, are not giving the appearance of and the reality of judging this in an impartial way."

In an interview with Fox News earlier this month, McConnell said that he would work through the process of a trial "in total coordination with the White House counsel" and that "there will be no difference between the President's position and our position as to how to handle this."

The Majority Leader's comments have generated criticism from congressional Democrats, while Republican Sen. Lisa Murkowski of Alaska has said that she is "disturbed" by coordination between McConnell and the White House over the upcoming impeachment trial.

McConnell has also pointed to past precedent in explaining his remarks. Earlier this month that "President Clinton and the Democrats in the Senate were coordinating their strategy."

Former Sen. Tom Daschle, who was Senate Democratic leader during the Clinton impeachment trial, told CNN earlier this month that while he did not personally talk to Clinton in preparing for the impeachment trial, his staff was in constant coordination with senior White House officials about it.

"There are so many moving parts," Daschle said, referring to coordinating the House managers and White House counsel's office and 100 senators, that they had no choice.