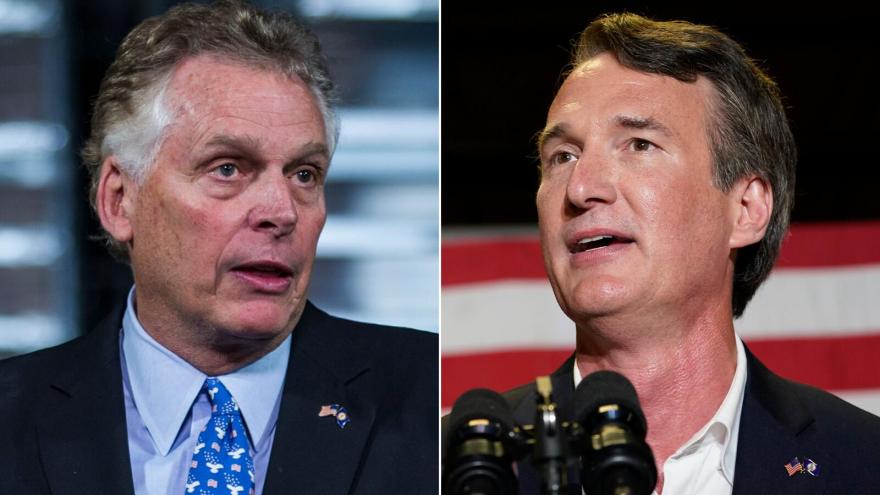 The final votes are being cast in the unexpectedly tight Virginia governor's race as Democrat Terry McAuliffe seeks a second non-consecutive term in a contest that could offer clues about his party's uphill battle to maintain control of the US House and Senate in next year's midterm elections as President Joe Biden's approval ratings slide.

McAuliffe's loss in a state that President Joe Biden won by double digits last year showed the enormous challenges that Democrats are facing next year as they attempt to maintain control of the US House and Senate. McAuliffe, who served as governor from 2014 to 2018 in a state that does not allow successive terms, had struggled to find a message that would galvanize Democrats at a time when Biden's approval ratings have sagged and the party has been unable to deliver a clear message amid bickering over the President's agenda in Congress.

McAuliffe conceded Wednesday morning, congratulating Youngkin and "wishing the best to him and his family." He and Youngkin have not yet spoken on the phone, a McAuliffe aide told CNN, adding that the Democrat called Youngkin before he publicly conceded but the governor-elect did not pick up.

Virginia and New Jersey each have a historical pattern of electing governors in off-year elections who are from the opposite party of the occupant of the White House. McAuliffe defied that pattern when he won his first term in 2013, the year after then-President Barack Obama won reelection. New Jersey Gov. Phil Murphy had hoped voters would reward him for his handling of the Covid-19 pandemic and make him the first Democratic governor to win reelection in the state in more than 40 years. But as the ballots were counted Tuesday night, Republican Jack Ciattarelli was performing much better than expected, another warning sign for Democrats in a state Biden won by nearly 16 points. The race remains too close to call.

McAuliffe had hoped to win a second nonconsecutive term by trying to tie Youngkin to former President Donald Trump. But that strategy fell flat -- failing to turn out the Democrats that McAuliffe needed to staunch Youngkin's momentum and his gains among independent voters. The dynamic provided a cautionary tale for some Democrats who had hoped to use that strategy to defeat their Republican opponents next year in the midterm races. The sour mood of voters also appeared to be a factor in the much closer than expected New Jersey governor's race.

Virginia Democrats clearly underestimated Youngkin, an agile candidate who burrowed into local issues like education and fashioned himself as a champion for parental rights. The Republican successfully kept Trump at a distance but praised him early in the race -- managing to avoid alienating his supporters while successfully making a play for critical voters in the Northern Virginia suburbs who rejected Trump last year.

Late Tuesday night, Youngkin was exceeding the performance of the previous Republican gubernatorial candidate four years ago and also significantly outperforming Trump's margins in the Virginia suburbs, which had been trending increasingly Democratic. McAuliffe's margins, by contrast, fell below the tallies in previous contests of Biden and Virginia's current Democratic governor, Ralph Northam, in key areas throughout the state.

Youngkin addressed his supporters, promising to deliver on his campaign promises on school choice and cutting some taxes in the state.

He appeared briefly before his supporters late Tuesday night. "We still got a lot of votes to count," the Democrat said. "We are going to continue to count votes."

McAuliffe had made a gamble by centering his campaign on the notion that Youngkin was a Trump "wannabe." In the final days on the campaign trail, he referred to Youngkin as "Glenn Trumpkin" and argued that a Youngkin win in Virginia would embolden Trump ahead of possible 2024 White House bid, but that argument does not appear to have energized Democratic voters the way McAuliffe had hoped. Youngkin tapped into some of Trump's rhetoric to appeal to the GOP base -- by invoking certain culture war issues and talking about "election integrity" early in the race, for example -- but he steered clear of the telerally that Trump held Monday night for the Republican ticket.

Winsome Sears, a conservative Republican, will be Virginia's next lieutenant governor, breaking barriers as the first woman and the first woman of color in the office in the commonwealth's 400-year legislative history.

The preliminary results of CNN's Virginia exit poll demonstrated the difficult headwinds that McAuliffe faced as he tried to navigate the discord within his party. Only 43% of Virginians said they approve of Biden's job performance and a narrow majority of voters described the Democratic Party as too liberal overall; while fewer voters described the Republican Party as too conservative.

About one-third of Virginia voters called the economy the most important issue facing the state, according to the exit poll. Just under one-quarter said education was most important, about 15% chose taxes, about 14% said the Covid-19 pandemic. Just about one-tenth chose abortion.

Virginia voters held negative views of both Biden and Trump. Only about one-fifth of voters said they view their vote as a way to express support for Biden, with nearly 3 in 10 saying it's a way to express opposition, and the remaining half of the electorate saying Biden wasn't a factor.

Despite McAuliffe's efforts to demonize Youngkin as a Trump warrior, who has said the former President "represents so much of why I'm running," the Republican's campaign presented him as a non-threatening, fleece-vest-wearing Northern Virginia dad and businessman who coached basketball in his free time.

Youngkin wooed suburban voters by digging into the GOP's culture wars -- promising to protect law enforcement funding amid concerns about rising crime nationally, rejecting Covid-19 vaccine mandates for teachers and state workers, and vowing that Virginia schools will not "teach our children to view everything through a lens of race." At a time when the electorate has increasingly embraced newcomers to politics, Youngkin portrayed his rival as the ultimate political insider as the former chair of the Democratic National Committee and a leading fundraiser for Bill and Hillary Clinton over decades.

In a message keyed toward suburban women, Youngkin charged that McAuliffe would allow government to stand between parents and their children when it comes to education, seizing on a comment from the Democrat in a debate that he didn't think "parents should be telling schools what they should teach."

One of Youngkin's closing ads featured Fairfax County mother and conservative activist Laura Murphy claiming that a book her then-high school son was assigned to read gave him nightmares. The book, which the ad does not mention by name, was Toni Morrison's "Beloved," which is about the horrors of slavery. Murphy had led a campaign against the teaching of the Pulitzer Prize-winning novel, leading to two bills -- eventually vetoed by McAuliffe -- that would have allowed parents to reject certain assignments they viewed as explicit.

Democrats jumped on the ad, with McAuliffe calling it a "racist dog whistle" and arguing his Republican opponent was using education to divide Virginia by pitting parents against parents, and parents against teachers.

A difficult lift for Democrats despite Virginia's recent blue streak

McAuliffe labored against the exhaustion of Democratic voters, a more energized Republican base and Biden's waning popularity. A chaotic withdrawal from Afghanistan, a Covid-19 surge fueled by the Delta variant and sluggish economy have all taken a toll on Biden, who has struggled to unite his party around his agenda.

Progressive and moderate Democrats in Congress have spent months wrangling over the size and scope of the President's climate and social safety net package, but even if there had been a vote on that $1.75 million economic plan and an accompanying bipartisan infrastructure by Tuesday of this week, it would have been far too late to boost McAuliffe in a state where early voting began weeks ago.

Without a tangible achievement to point to from Democratic-controlled Washington, McAuliffe didn't hide his frustration. He demanded that members of Congress "do your job and quit the posturing," in an interview with CNN.

The national mood has soured amid lingering fears, restrictions and frustrations related to the Covid-19 pandemic and the uncertain economic recovery. Voters are concerned about inflation, the higher prices they are paying as the holiday season approaches and supply chain bottlenecks that have disrupted the economy. The latest CNN Poll of Polls finds the President at 42% approval to 51% disapproval among US adults, and in a national NBC News poll released Sunday, 7 in 10 said the country is going in the wrong direction.

The debates featured sharp policy contrasts between the two candidates. Youngkin had argued that McAuliffe's plans for government spending were too expensive and said he would fuel an economic revival in Virginia by cutting taxes, including the "grocery tax" which Youngkin says would save Virginians $1,500 in the first year of implementation.

McAuliffe had promised a $2 billion investment in education -- twice the amount he proposed in his first term -- and touted 20 plans he had developed to lead the state out of the Covid pandemic. He also called for Covid-19 vaccine mandates for state teachers, health care workers and other essential employees, arguing that Youngkin's resistance to those measures would jeopardize the state's recovery.

Youngkin said that while he has asked everyone in Virginia "to please get the vaccine," he believes firing workers who do not comply with vaccine mandates could cripple the state economically.

"We need people on the job. To make life difficult, that's no way to go serve Virginians," Youngkin said in the candidates' final debate. "We can do this. We can in fact protect lives and livelihoods."

This story has been updated with CNN's projection.