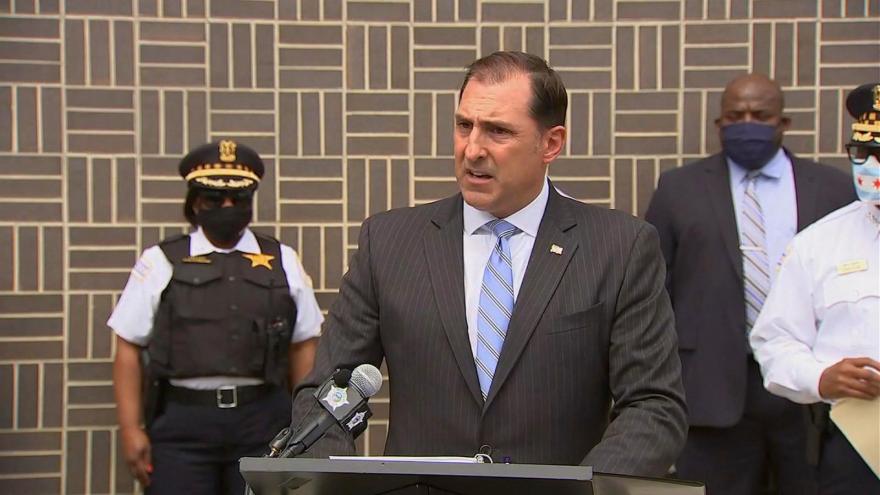 (CNN) -- The reputed leader of Black Disciples street gang in Chicago and 22 other people have been arrested on federal drug and gun trafficking charges, the US Attorney for the Northern District of Illinois said Wednesday.

The arrests on Tuesday came after a multiyear law enforcement investigation focused on the distribution of narcotics and guns in the Englewood neighborhood on the South Side and other parts of the city, c said in a statement.

Court documents describe more than 50 transactions in which the alleged gang members sold guns or drugs to people cooperating with law enforcement, according to the statement. Many of the transactions were captured on video.

The charges range from drug and firearm offenses to -- in one case -- bank fraud, the statement said.

"The true test in all of our efforts... (is) what will we see with the number of shootings and the number of homicides in our city," Lausch told reporters.

The defendants include Darnell McMiller, described in court documents as leader of the Black Disciples in Chicago -- a national street gang prevalent in the city and its surrounding suburbs.

"It is one of the historic gangs in Chicago ... one of the engrained gangs that have operated in the city for decades," Lausch said.

McMiller, 34, is accused in a federal complaint of conspiring with another alleged ranking member of the gang, Charles Knight, 56, to distribute fentanyl-laced heroin to a government informant in September 2019.

Another defendant, Kenneth Brown, 59, is accused in documents of conspiring with reputed gang member Terrence Morris, 48, to distribute heroin in March 2019, according to Lausch's statement.

A court-ordered search of a South Side storage unit rented by Brown turned up 13 kilograms, or nearly 30 pounds, of cocaine individually wrapped in sealed packages, according to federal prosecutors.

Clarence January, 27, who allegedly led the gang's "Dog Pound" faction, is accused of trafficking three handguns in the summer of 2019, according to the statement. He had been previously convicted of a felony firearm offense in a state court and not lawfully allowed to possess the guns.

Attorneys for McMiller and Knight did not immediately respond to a request for comment. It was unclear whether the other defendants have attorneys.

Authorities also seized 24 firearms, more than a kilogram of heroin, about 1,350 grams of heroin laced with fentanyl, some 750 grams of fentanyl or fentanyl analogue, around 378 grams of crack cocaine, $52,595 in suspected illicit cash proceeds, and distribution quantities of suspected MDMA pills.

Lausch said the investigation preceded a US Justice Department effort known as Operation Legend, which has dispatched federal law enforcement to Chicago and other cities despite resistance from local officials.

"The arrests would have happened in the normal course whether or not Operation Legend had started," he said.