Rescuers battle fire, noise and shifting steel and concrete as they scramble to save lives 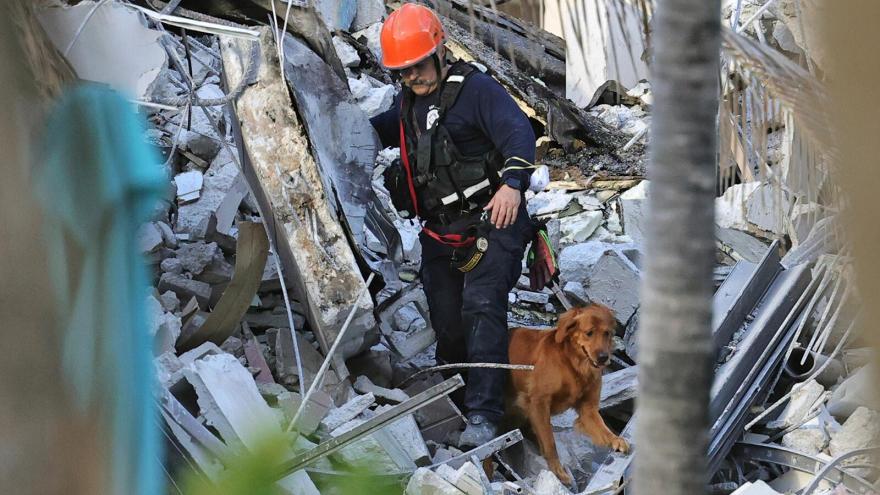 Rescuers are frantically searching for survivors trapped beneath the rubble of a partially collapsed condominium tower in Surfside, Florida.

Though it's unclear how many people were in the portion of the 12-story building that fell, scores of victims remain unaccounted for. The death toll has risen to four.

Rescuers above and below the rubble are using light and heavy machinery, along with an array of technology, in their search, said Raide Jadallah, assistant chief of operations for the Miami-Dade Fire Rescue Department

As machines move the debris -- ever so carefully so as not to disturb voids where survivors might be trapped -- rescue workers are employing listening devices, sensitive enough to hear a watch ticking, to detect sounds indicating someone might be trying to make their location known, officials said. It's a tricky science because there are so many noises emanating from the debris, Jadallah said.

He added: "We have hope. Every time we hear a sound, we concentrate in that area, so we send additional teams, utilizing the devices, utilizing canine."

People can survive a week or more beneath rubble, so despite being a day-and-a-half into the rescue efforts, the mission is still at an early stage, officials said.

On a scene so fraught with peril -- conditions are exacerbated by wind and rain, which can disturb the rubble -- those working in the debris are risking their own lives, Jadallah pointed out. Fires erupting from overheated lithium-ion batteries and other combustible material also pose dangers, officials said.

"This work is being done at extreme risk to these individuals," the mayor said. "Debris is falling on them as they do their work. We have structural engineers on site to assure that they will not be injured, but they are proceeding because they are so motivated."

At least 130 firefighters were part of the effort as of Friday morning, Jadallah said. That's in addition to other local, state and federal personnel descending on the scene over the course of the day.

The state fire marshal's office is sending additional urban search-and-rescue teams, and other teams are on stand by, said Kevin Guthrie, director of the Florida Division of Emergency Management. The regional coordinator for the Federal Emergency Management Agency, which has issued an emergency declaration, arrived overnight. About 15 more FEMA officials, along with additional state emergency management staff, will arrive sometime Friday, Guthrie said. And more assistance was en route from Orlando and Naples early Friday, officials said.

As search dogs sniff through the rubble and rescuers use technology like sonar and cameras to explore voids that might provide refuge, the fires popping up remain a worry -- and not solely because fire itself poses danger.

The fires, in some cases, are disturbing the infrared technology rescuers employ to find survivors, and the water used to douse the blazes "adds a tremendous amount of weight" to the rubble," said state Fire Marshal Jimmy Patronis. As crews pump the water out, they're "also shifting materials that creates a ripple effect," he said.

"It then challenges the integrity of what's still standing there -- and then that delicate balance of saving lives while risking lives," he said.

The work is "methodical, fast-paced, while at the same time, deliberate," said Chief Scott Goldstein, an urban search-and-rescue specialist who heads the Montgomery County Fire & Rescue Service in Maryland.

It remains a rescue op

The priority is finding those beneath the rubble, Goldstein said, and rescuers are working to maintain their focus so as not to "miss any signs and indications of a victim being trapped in the building." They're also working to stay hydrated, as temperatures are in the mid-80s and humidity is soaring.

The condo tower appears to have suffered what's known as a "pancake collapse," meaning the walls that provide the building's structure failed, so voids may be less common here than in a building where only one wall or a cantilever or other supporting mechanisms failed, he said. However, a video put out by county officials Thursday night shows voids in the underground parking area, he noted.

"Each of those spaces provide opportunities for a survivable area. Seven to 10 days, it's not uncommon for someone to be found alive and removed from a horrific event like this," Goldstein said.

While rescuers pore through the rubble -- requiring them at times to get on their hands and knees and, in the tightest areas, on their stomachs -- the building is shifting, so the remaining structure is constantly being monitored, he said. As teams move the rubble, the debris pile is assessed and wood and heavy timber are put into place for stabilization. The weight of the rain isn't helping, Goldstein said.

"As they cut a hole or drill a hole in the concrete or remove a piece of furniture or a filing cabinet, that then creates a void and they have to shore that," he said.

Monitoring devices on the portion of the building that remains standing will alert rescuers to movement in the structure as they work to tackle the dangerous hanging debris, said former Miami-Dade Fire Rescue Chief Dave Downey. They're also scrambling to channel the rain and water from fire hoses that is running into the debris, while "de-watering" already inundated areas, he said.

"Today, we're moving in more search-and-rescue personnel, and we are also moving in some equipment to start a very precise delayering to lift up some of those heavier slabs and, again, start to uncover any potential void spaces," Downey said. "We have structural engineers that are going to be there assessing the structure, telling them where they can go, where they can't go, what they need to do to stabilize certain parts of the structure."

Town manager: Know someone? Say something

Victims have already been pulled from the lighter rubble, officials said, and because some of the stairwells were compromised, rescue crews used ladders to reach people stuck in the still-erect portion of the condo tower.

Homicide detectives and the medical examiner's officer are on scene to help identify any victims extracted from the rubble, said Miami-Dade Police Department Director Alfredo Ramirez.

But officials stress this remains a rescue operation.

The scene is cordoned off, with access strictly monitored. And authorities are requesting the public's assistance in identifying who may have been in the building at the time. While it's estimated about 80% of the 136 units were owned or leased, families in Surfside tend to travel "quite a bit," especially in June, so officials are struggling to get a headcount of who might be missing, Town Manager Andrew Wyatt said.

It's "a little concerning," Wyatt said, that officials aren't receiving more phone calls from residents reporting they are traveling or otherwise OK.

Downey implored anyone with information on who was or wasn't in the building to call the county's missing persons hotline at 305-614-1819.

"The sooner that we can get a reliable list of those that are missing, it will help the search-and-rescue operations," he said. "If somebody says somebody's missing in a certain apartment, we can focus ... in that part of the building. Right now, they're looking for needles in a haystack."

Crews are also examining the license plates of vehicles in the garage in hopes of cross-referencing the automobiles' owners with the names of those who are missing, rescued or fortunate enough to have not been in the building, said Patronis, the fire marshal.

Officials are asking families waiting to reunify with loved ones at the Surfside Community Center to provide information on relatives' tattoos, dental work, scars or other distinguishing characteristics, said Emma Lew, director of the Miami-Dade County Medical Examiner Department. The office will also collect fingerprints, DNA and X-rays showing orthopedic implants, she said.

Patronis and Downey have faith that, given the training and experience among those involved in the rescue, that they will locate anyone stuck in the rubble. Some of the teams have worked all over the world, Downey said.

"We had every department in this region in response, but the skill set that these men and women have are unique," Patronis said. "They are ... built to go from building to building after hurricane disaster, manmade or natural. They're used to digging through debris to find lives."