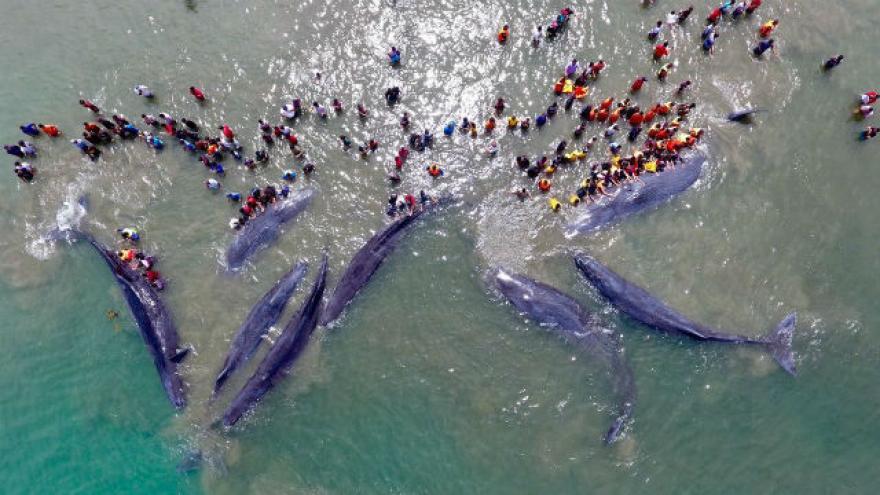 Of the 10 whales stranded on the beach, six survived. Photo courtesy WWF Indonesia 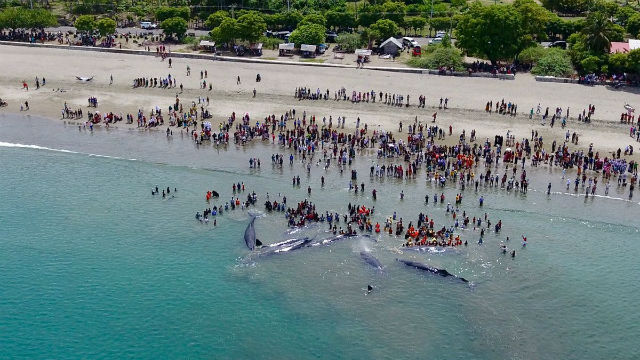 Locals and the Indonesian navy worked to return the animals to the ocean. WWF Indonesia

(CNN) -- A desperate rescue attempt managed to save half of a pod of sperm whales which beached off the coast of Aceh, Indonesia.

WWF Indonesia said 10 whales were stranded on Monday, seven of whom were returned to the water thanks to the efforts of the navy and locals.

Three whales died on the beach, and in a heartbreaking development for the rescuers, one of the animals that had been saved came back and was stranded again, this time fatally.

Dwi Aryo Tjiptohandono, WWF Indonesia's marine and fisheries campaign coordinator, said the group was investigating how the whales had come to be stranded. Autopsies will be carried out on the dead animals.

He added the rescuers fear the six whales returned to the sea might attempt to come back for the four dead animals, risking being beached again.

According to Whale Stranding Indonesia, a monitoring group, at least 30 animals have beached since the beginning of the year, including whales, dolphins and dugongs, also known as sea cows.

It is not exactly clear why whales and other marine mammals get stranded, but experts say it can be a combination of factors, from old age, illness or injury, to accidental navigation errors.

"The strong social bonding of some species of whales can cause mass strandings," according to Project Jonah, a New Zealand-based whale charity.

"One of the most common patterns with mass strandings is that one or two whales will initially strand. These animals will send out distress signals and members from their pod may attempt to help or mill slightly off-shore. A receding tide will then catch these animals out and soon the whole pod will become stranded."

Earlier this year, New Zealand saw one of its worst stranding events in history, when more than 400 pilot whales beached on Farewell Spit on the tip of South Island.

More than 250 of whales died as rescuers desperately attempted to return them to the water.

The largest whale stranding in New Zealand took place in 1918, when 1,000 whales stranded themselves on the Chatham Islands.