Researchers discover a dinosaur preserved sitting on a nest of eggs with fossilized embryos, a first 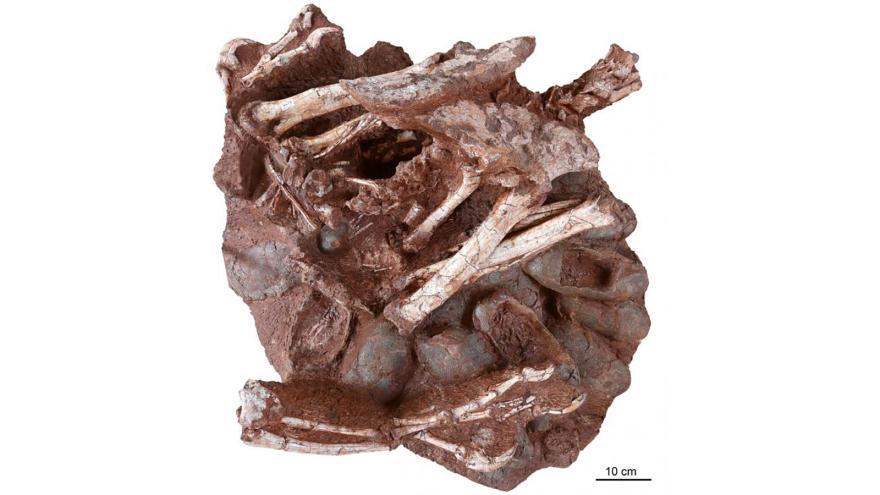 The 70-million-year-old fossil: an adult oviraptorid theropod dinosaur sitting atop a nest of its eggs. - Shundong Bi/Indiana University of Pennslyvania

(CNN) -- Scientists are celebrating the first discovery of a dinosaur preserved while sitting on a nest of eggs with fossilized embryos, including at least three that were visible.

The oviraptorosaur fossil was uncovered from rocks that are 70 million years old in Ganzhou City, China, the Carnegie Museum of Natural History (CMNH) said in a news release in January.

Oviraptorosaurs were part of a diverse group of feathered, bird-like dinosaurs that lived during the Cretaceous period.

"Dinosaurs preserved on their nests are rare, and so are fossil embryos. This is the first time a non-avian dinosaur has been found sitting on a nest of eggs that preserve embryos, in a single spectacular specimen," said Shundong Bi, a CMNH researcher and professor at the Indiana University of Pennsylvania, in the release. Bi and Xing Xu, a professor at Chinese Academy of Sciences, were the primary authors of a paper announcing the discovery in Science Bulletin.

The fossil of what is believed to be an adult oviraptorid can be seen hunched over 24 eggs or more, at least seven of which preserved the bones of the partial embryos found inside, the researchers said in the journal.

Some of the embryos in the eggs were visible as well the "forearms, pelvis, hind limbs, and partial tail of the adult," CMNH said.

"The late stage of development of the embryos and the close proximity of the adult to the eggs strongly suggests that the latter died in the act of incubating its nest, like its modern bird cousins, rather than laying its eggs or simply guarding its nest crocodile-style, as has sometimes been proposed for the few other oviraptorid skeletons that have been found atop nests," CMNH said.

The discovery uncovered multiple details about the species, including that dinosaurs were nurturing to their offspring.

"Though a few adult oviraptorids have been found on nests of their eggs before, no embryos have ever been found inside those eggs," Dr. Matt Lamanna, CMNH lead dinosaur paleontologist and another researcher in the study, said in the release.

"In the new specimen, the babies were almost ready to hatch, which tells us beyond a doubt that this oviraptorid had tended its nest for quite a long time," Lamanna said. "This dinosaur was a caring parent that ultimately gave its life while nurturing its young."

The fossil also gave researchers insight on the diets of oviraptorosaurs, as the fossil was found with pebbles -- most likely gastroliths, or "stomach stones" -- in the abdominal region.

Dinosaurs would swallow the stones on purpose to help them digest their food. This is the first time gastroliths were found in oviraptorids, according to CMNH.

"It's extraordinary to think how much biological information is captured in just this single fossil," said Xu. "We're going to be learning from this specimen for many years to come."