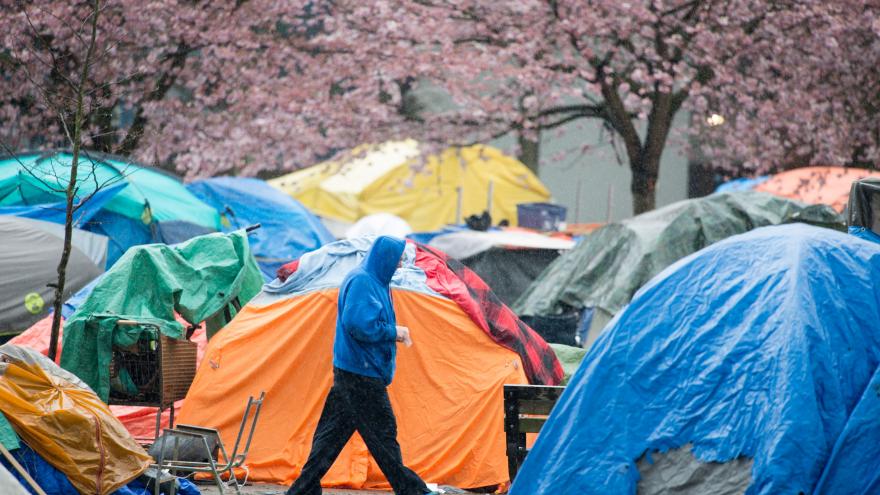 (CNN) -- You've heard this refrain before -- giving money to homeless people is not the best way to help them because it might be squandered, or spent on harmful habits. But a new Canadian study makes a powerful case to the contrary.

The study, dubbed "The New Leaf Project," is an initiative of Foundations for Social Change, a charitable organization based in Vancouver, in partnership with the University of British Columbia.

Researchers gave 50 recently homeless people a lump sum of 7,500 Canadian dollars (nearly $5,700). They followed the cash recipients' life over 12-18 months and compared their outcomes to that of a control group who didn't receive the payment.

The preliminary findings, which will be peer-reviewed next year, show that those who received cash were able to find stable housing faster, on average. By comparison, those who didn't receive cash lagged about 12 months behind in securing more permanent housing.

People who received cash were able to access the food they needed to livefaster. Nearly 70% did after one month, and maintained greater food security throughout the year.

The recipients spent more on food, clothing and rent, while there was a 39% decrease in spending on goods like alcohol, cigarettes or drugs.

"The homeless population continues to grow, and we keep applying the same old approaches," said Claire Williams, the CEO and co-founder of Foundations for Social Change.

"We really think it's important to start testing meaningful risk-taking in the name of social change," WIlliams added.

The 115 participants in the randomized controlled trial were between the ages of 19 and 64, and they had been homeless for an average of 6 months. Participants were screened for a low risk of mental health challenges and substance abuse.

Funding for the initiative came from a grant from the Canadian federal government, and from donors and foundations in the country.

"One of the things that was most striking is that most people who received the cash knew immediately what they wanted to do with that money, and that just flies in the face of stereotypes," Williams told CNN.

For example, she explained some cash recipients knew they wanted to use the money to move into housing, or invest in transportation -- getting a bike, or taking their cars to the repair shop to be able to keep their jobs. Others wanted to purchase computers. A number of them wanted to start their own small businesses.

"People very much know what they need, but we often don't equip them with the intervention or the services that really empowers them with choice and dignity to move forward on their own terms," Williams said.

Not a 'silver bullet,' but a useful tool for many

Direct cash transfers are not "a silver bullet for homelessness in general," and the program focused on "a higher functioning subset of the homeless population," Williams said, but she believes the research shows that providing meaningful support to folks who have recently become homeless decreases the likelihood they will become entrenched in the experience.

People who received the cash infusions were even able to set some money aside -- about 1,000 Canadian dollars on average through 12 months.

The money provided by the program also had "trickle down impacts," according to Williams, with people investing more in their children's well-being and needs, as well as helping out family members.

"There are these hidden impacts that we just don't anticipate and aren't necessarily quantifying, but now we're seeing that this is having an exponential effect on people's lives," Williams explained.

The study shows there are advantages for the taxpayer, too.

"There's a common misconception that the cost of doing nothing is free or cheap and it absolutely is not," Williams said.

Homelessness and the pandemic

The risk of homelessness looms large for many across the United States, as people deal with job losses and economic uncertainty brought about by the coronavirus pandemic.

"We're hearing that from homeless providers in a lot of places, people who have never been homeless before are coming into shelters and have no idea what to do," Steve Berg, a vice president with the National Alliance to End Homelessness, an American nonprofit organization, told CNN.

Innovative solutions to the issue are even more pressing right now. Berg thinks the research confirms what is true for many people experiencing homelessness: money can solve it.

"There are certainly people who are homeless who have deeper, more severe problems," Berg explained, "but for many people, it's simply a matter of -- they ran out of money, lost a job, fell on hard times, became homeless. Once they're homeless, it's very difficult to get enough money saved up in order to find a place to live."

"People can be relied on, if they get the money upfront, to take care of the problem themselves," Berg added.