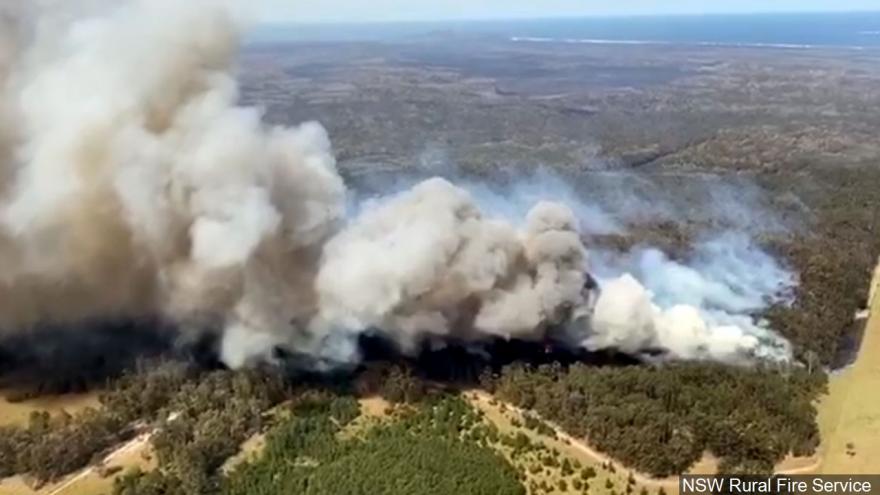 (CNN) -- Residents of several towns in the picturesque southeastern Australian state of Victoria are being warned to "take shelter indoors immediately," as devastating wildfires continue to rage across the region.

Tens of thousands of residents and people on vacation were urged to evacuate Sunday, as authorities had forecast that several factors could make it an incredibly dangerous day in terms of fire risk.

"The extreme fire dangers, the strong winds that were forecast, and the very hot temperatures have all come as we thought," Andrew Tupper of the Victoria Bureau of Meteorology said at a news conference on Monday.

Several emergency warnings have been put in place throughout Victoria, meaning people in those areas are in "imminent danger," according to Victoria Emergency. Victoria Emergency have issued several warnings on Twitter telling people in a handful of villages in remote parts of the state "it is too late to leave" and advising them to stay inside.

The Australia Bureau of Meteorology said that fires in the region "exhibited very dangerous behavior overnight" that are "likely to worsen today."

East Gippsland is expected to be one of the areas most affected. Victoria Emergency Management Commissioner Andrew Crisp said a number of new fires broke out there Monday, and conditions aren't expected to improve until midnight local time.

"We have been telling people for more than 24 hours East Gippsland is at significant risk," Crisp said at a briefing Monday. "You should not be on the roads."

Located in the far eastern corner of Victoria, East Gippsland is home to about 80,000 people, who are scattered across remote villages and towns. The region is popular with tourists, who go to see wildlife and hike in the national parks.

A fire in nearby Mallacoota also has authorities worried. Crisp said the blaze began Sunday afternoon, and as winds changed direction it quickly shifted directions and traveled some 24 kilometers (15 miles) in about four hours, he said. The smoke columns from the fire rose some 14 kilometers (9 miles) high, and have begun generating their own weather systems.

"There's lightning coming out of these columns," he said.

Australia has dealt with a series of fires this summer that authorities have described as historic, unprecedented and "catastrophic." The deadly blazes have largely been caused by record-breaking heat and dry conditions.

Monday in Victoria was forecast to be particularly bad. The dry conditions, high temperatures -- parts of the state could reach above 40 degrees Celsius (104 degrees Fahrenheit) -- strong winds and thunderstorms all combine to greatly increase the risk of existing fires spreading or new ones sparking, Victoria Emergency said.

A change in wind direction is forecast on Monday night, which could bring a drop in temperatures, the Australian Bureau of Meteorology reported. However, more thunderstorms are also forecast, carrying the threat of "damaging" and "destructive" winds.

Fires are also burning in the neighboring state of South Australia, where some areas are experiencing "catastrophic fire danger," the highest warning on the scale, the Bureau of Meteorology said.

For weeks, the New South Wales capital of Sydney has been shrouded in smoke from fires burning across the state -- leading to calls for the city's famed New Year's Eve fireworks to be canceled.

NSW has been the hardest hit by the prolonged fire season, and conditions there are also expected to deteriorate over the next two days.

One volunteer firefighter was killed in New South Wales on Monday, while two others suffered burns battling the same fire, the NSW Rural Fire Service said. It is believed the firefighters were in a truck when their truck rolled over in the high winds, the agency said on Twitter.

Sydney's annual fireworks display was approved Monday, according to the NSW Rural Fire Service, despite more than a quarter of a million people signing a petition asking the government to redistribute fireworks show funds towards firefighting efforts.

Sydney's Lord Mayor Clover Moore said she had "been moved by the outpouring of support and care for the community," but the event would continue as planned.

"Our fireworks are planned 15 months in advance and most of the budget -- which is largely allocated to crowd safety and cleaning measures -- has already been spent," she said.

Prime Minister Scott Morrison said Sunday the celebration should go ahead because it is "important to send a message to the world."

"Subject to the safety considerations, I can think of no better time to express to the world just how optimistic and positive we are as a country," he said.

John Barilaro, the deputy premier of NSW, tweeted on Monday that the fireworks should be canceled.

"The risk is too high and we must respect our exhausted (Rural Fire Service) volunteers. If regional areas have had fireworks banned, then let's not have two classes of citizens. We're all in this crisis together," he said.