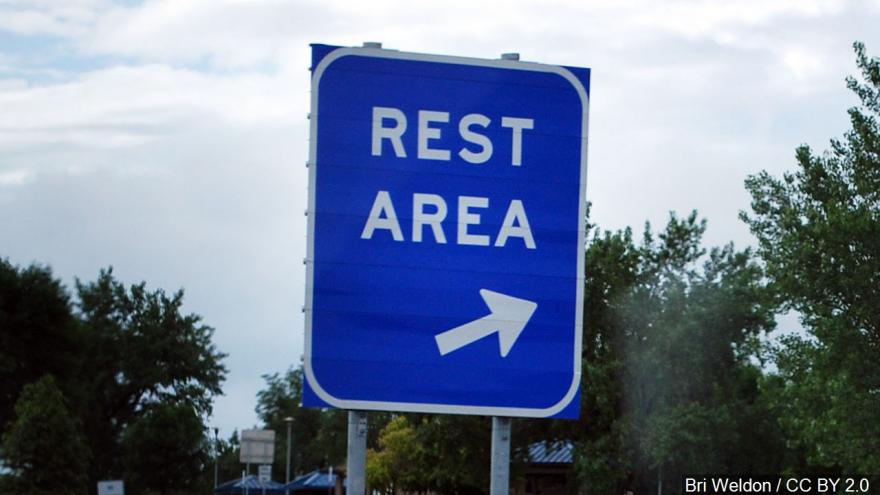 (CNN) -- In a high-rise building in Jersey City, New Jersey sits a well-decorated apartment with tall windows, modern art pieces, funky wallpaper and a balcony with views of the Manhattan skyline.

The space is part of a project called "For Those Who Tour" from experiential marketing firm the Participation Agency. The idea is to provide free overnight accommodations and temporary rest stops for emerging musicians on tour.

In return, the artists are asked but not required to post about the brands featured in the space on social media.

While the spaces are designed by the Participation Agency's team, the firm partners with companies such as West Elm, water bottle brand S'well, and beverage manufacturers Dirty Lemon and Califia Farms, to provide products for the properties. Brands also pay an undisclosed fee for participating in the program.

The overnight locations, which the Participation Agency refers to as"Basecamp," feature recording equipment, a kitchen, laundry, parking, room to sleep as many as seven people, and even space for musicians to throw a small concert for fans. Other perks include exercise equipment, such as yoga mats, and "inspirational" reading materials including musician biographies.

Since launching in 2017, over 460 musicians -- including Grammy nominated artist Halsey, Little Dragon, BØRNS, G-Eazy and Tom Misch -- have stayed at the properties.

There are additional spaces outside New Jersey, too. For Those Who Tour has locations in El Paso, Texas and Los Angeles, and is opening one in Chicago in March. The organization plans to expand to more cities in the future.

For Those Who Tour leans into the fact that companies are increasingly working with celebrities and social media stars, known as influencers, to reach their followers and boost brand awareness. Influencers often receive free swag or are paid to promote brands on their social media accounts. In this case, they're getting a free place to hang out.

"Someone who feels a passionate connection to a musician, a creative or an artist, is going to listen and be inspired by their story much more so than a faceless brand," said Jessica Resler, cofounder and creative director of the Participation Agency, told CNN Business. "Musicians are some of the best content generators that exist from the influencer community."

Brands receive an average of 200,000 social media impressions per month from products placed in the spaces from the influencers' posts, according to the Participation Agency.

Kamiu Lee, CEO of influencer marketing company Activate, said For Those Who Tour's approach lends itself to more authentic and organic content posted by the musicians compared to a more formal sponsored partnership in which a brand may exert more control over the message of the post.

"You want to foster a certain level of organic content out there. This is one way of doing it," Lee said.

The Participation Agency covers the rent for the properties. (However, for the Jersey City apartment, the firm struck a deal with the building to not pay rent in exchange for the visiting musicians to perform a concert once a month for residents in a common space).

Another potential advantage for brands: The concept focuses on emerging musicians rather than big name artists with a huge social media audience. Influencers with a smaller number of followers have higher engagement rates on their posts, according to Randi Priluck, a marketing professor at Pace University who studies social media.

"Engagement increases significantly the fewer followers an influencer has," Priluck said. "If brands really want people who are very engaged with the influencers, who believe what they say, and want to be like those influencers, they want to have a high engagement rate, because it shows that [the followers] really pay attention to the posts."

For Those Who Tour is not alone in providing an Instagram-worthy backdrop that's tailored for influencers and brands. Last year, marketing firm Village Marketing unveiled a penthouse apartment in New York City designed to be the ideal background for Instagram photos. Influencers and brands have used it for product launches, capturing content for social media and special events.

Social media-friendly pop-up experiences dedicated to everything from rosé wine to avocados have also sprung up in major US cities, offering their visitors plenty of photo opportunities.

Whether it's a For Those Who Tour location or an experiential museum celebrating ice cream, it's an opportunity for influencers to create fresh and unique content.

"As a content creator you need to continue to publish content and make sure it's interesting," Activate's Lee said. "Giving your audience a glimpse of things that you're experiencing is just that much more interesting than taking pictures of a product or yourself."