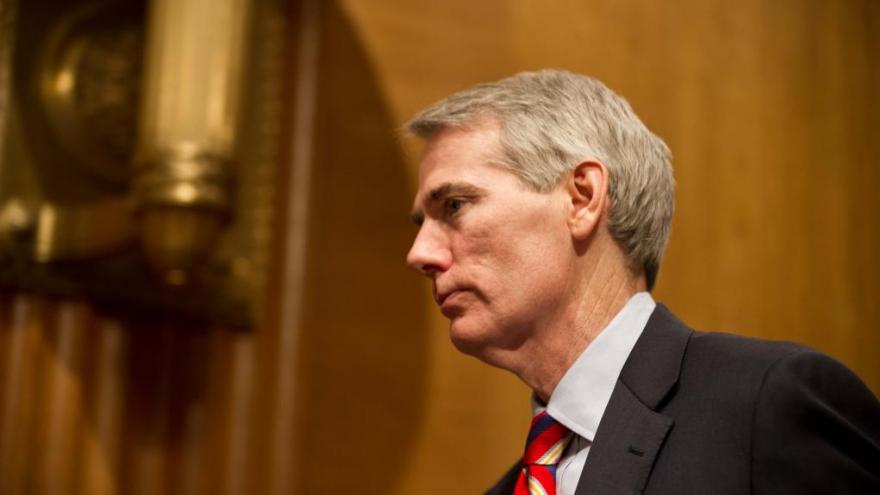 US Republican Senator from Ohio Rob Portman leaves the room as acting US Trade Representative Demetrios Marantis testifies before the Senate Finance Committee on the President's 2013 Trade Agenda on Capitol Hill in Washington on March 19, 2013.

(CNN) -- Senate GOP leaders are bracing for more retirements within their ranks, as a handful of senior Republicans decline to commit to running again -- following four tumultuous years in the Trump era and facing a polarized political climate ahead.

Three Republican senators have already decided to retire in 2022, including Ohio Sen. Rob Portman, whose announcement on Monday stunned his colleagues and ignited an all-out scramble in both parties to line up candidates to fill the crucial seat.

But in interviews with CNN, several other GOP senators sidestepped questions about their political futures or made clear they were truly undecided about running again, including Sens. John Thune of South Dakota, Ron Johnson of Wisconsin, Chuck Grassley of Iowa and Richard Shelby of Alabama.

The party out of power typically gains seats in a president's first midterm election, but Republicans will have to defend 20 of their Senate seats in 2022, while Democrats only have to defend 14 seats.

And the retirements of Portman, North Carolina Sen. Richard Burr and Pennsylvania Sen. Pat Toomey have given Democrats greater hope of winning those seats and retaining their slim Senate majority. The Republicans' decisions have sparked primaries that could cost millions and bruise whoever emerges as the party's nominees against the Democrats.

The three retirements were somewhat of a surprise since Portman, Burr and Toomey hover around the Senate's average age of about 62 years old. Yet they've bemoaned the Senate as an increasingly divided institution without the willpower to break the partisan gridlock. As of now, there are no Democratic senators who have decided to step aside, though that could quickly change.

Johnson's choice is the most crucial in terms of the future control of the Senate, since his swing state went for Biden in 2020 by less than a point. The Wisconsin senator said he would "work hard" to "make it possible for either myself or somebody else to keep that seat in Republican hands."

When asked why he would stay in the Senate, Johnson said "to be a firewall" against Democratic control of Washington.

"I'm not a fan of this place," Johnson said of the Senate. "I think this place is horribly dysfunctional."

Other Republican senators from competitive states sounded like they would run again, even though some wouldn't say so explicitly.

Missouri Sen. Roy Blunt, a member of the Republican leadership, said that he has not made an "official announcement."

"When I do, that's when the campaign will officially start," he added.

And as she entered the Senate subway in the Capitol, Alaska Sen. Lisa Murkowski told CNN, "I'm running." Utah Sen. Mitt Romney then interjected, "for now," and smiled.

A number of other senators from deep red states have not announced their new campaigns, but told CNN that they intend to run, including GOP Sens. Mike Crapo of Idaho, John Hoeven of North Dakota, Jerry Moran of Kansas and John Boozman of Arkansas.

"I am running for the border first, and reelection second," said Louisiana Sen. John Kennedy.

While Republicans are uncertain which of their members may be the next to call it quits, the decision by Portman caught many off-guard. "He's a big loss, a big loss for the caucus, really for the country," Thune said of Portman.

The Ohio Republican also had a unique connection to his state, winning his last race in 2016 by 20 points against former Democratic Gov. Ted Strickland.

"I was surprised," Sen. Rick Scott of Florida, the chair of the National Republican Senatorial Committee, told CNN of Portman's decision. When asked if the NRSC would get involved in the primary, Scott said: "I don't know. I know that people have in the past, so we'll see. It will be a new experience."

Scott has personally urged each of his incumbents to run again but said that Republicans would keep the US Senate seat in Ohio.

But Democrats said the GOP retirements would be a boon to their chances of keeping the Senate.

"With Ohio now joining Pennsylvania and North Carolina as another open seat liability in a major battleground state, Republicans are confronting messy and divisive primaries and a 2022 map that keeps getting harder to defend," said Democratic Senatorial Campaign Committee spokesman Stewart Boss.

Within hours of Portman's announcement came speculation that Ohio Republican Rep. Jim Jordan, a close ally and vocal defender of Trump, would run. Other possible GOP candidates include: J.D. Vance, the author of "Hillbilly Elegy," Josh Mandel, who dropped out of the 2018 GOP primary race to challenge Democratic Sen. Sherrod Brown, and Jon Husted, the state's lieutenant governor. Ohio Secretary of State Frank LaRose is also seriously eying a Senate bid, along with at least four other Republican members of Congress: Rep. Steve Stivers, Brad Wenstrup, Mike Turner and Warren Davidson. Rep. Tim Ryan is among the Democrats ruminating a run.

Two of the most competitive Senate seats in 2022 could be in Pennsylvania and North Carolina, which are held by Republicans Toomey and Burr. But two new Democratic senators, Mark Kelly and Raphael Warnock will have to defend seats in Arizona and Georgia, which have only recently trended blue.

Republicans recognize that their work will be cut out for them if more of their colleagues step aside.

"It certainly creates more focus on candidate recruitment," said Sen. Tim Scott, a Republican who is running for reelection in South Carolina next year. Retirements, he said, amount to a "loss of institutional knowledge on our side that's impossible to replace."

"But finding interesting, fascinating and exciting candidates will be our task," Scott said.