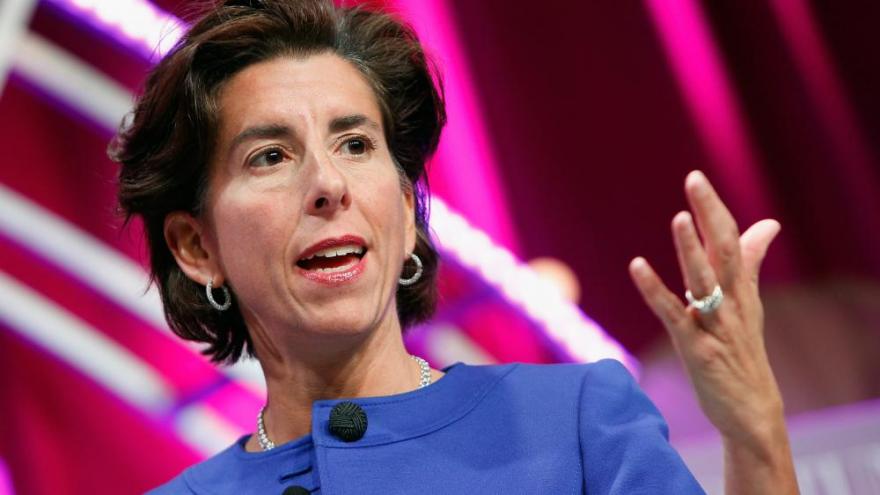 Rhode Island's governor said that law enforcement officers will stop cars and knock on doors in coastal communities to identify people who've been to New York state, joining other states in restricting the movements of out-of-state visitors to slow the spread of coronavirus.

(CNN) -- Rhode Island's governor said Friday that law enforcement officers will stop cars and knock on doors in coastal communities to identify people who've been to New York state, joining other states in restricting the movements of out-of-state visitors to slow the spread of coronavirus.

Kentucky's governor says he is considering closing the border between Kentucky and Tennessee, and checkpoints have been set up in the Florida Keys to restrict access.

"Right now, we have a pinpointed risk that we need to address, and we need to be very serious and that risk is called New York City," said Rhode Island Gov. Gina Raimondo at a news conference Friday.

Starting Saturday, Rhode Island law enforcement officers and the National Guard will be "going door-to-door" in coastal communities, asking people if they've been to New York and requesting their contact information, she said.

Police began monitoring highways at noon Friday and may pull over individuals with New York state license plates to ask the same questions, particularly on the base of the Newport Bridge, Raimondo said.

Tara Koppie was driving to Rhode Island from Staten Island, New York, on Friday to pick up a puppy she recently adopted, CNN affiliate WPRI reported. She had to stop at a checkpoint on Interstate 95 operated by Rhode Island State Police and soldiers from the Rhode Island National Guard.

"I feel bad that New York is getting such a bad rap sheet when it's really all over the place, you know, it shouldn't be that way, but unfortunately right now we have a lot of cases," Koppie told WPRI. She said she was planning to return home the same day.

Individuals can self-quarantine at a hotel, a rental property, a summer home or anywhere else they may be able to stay, she said. The penalty for violating this order initially is a fine, and additional violations of the order could be punishable by a prison sentence, Raimondo said.

Hotels and rental companies will be provided with this order in writing and will be asked to provide the information to their renters, Raimondo said.

"I wouldn't do it if I didn't think it were necessary," she said. "If you want to seek refuge in Rhode Island, you must be quarantined ... and we the people of Rhode Island plan to enforce that."

"While the Governor may have the power to suspend some state laws and regulations to address this medical emergency, she cannot suspend the Constitution. Under the Fourth Amendment, having a New York state license plate simply does not, and cannot, constitute 'probable cause' to allow police to stop a car and interrogate the driver, no matter how laudable the goal of the stop may be."

New York is coronavirus epicenter in the US, with more than 44,000 cases and at least 519 deaths as of Friday afternoon, according to CNN's state-by-state count.

Checkpoints set up at the Florida Keys

In the Florida Keys, government officials have established two traffic checkpoints at the top of the Keys that restrict non-residents' inbound road access.

The checkpoints opened Friday morning and are manned by officers from the Keys' Monroe County Sheriff's Office. They are located at mile marker 112.5 on the Florida Keys Overseas Highway (US 1), and on State Road 905 between Ocean Reef and the access point to US 1 in Key Largo.

The Keys have been temporarily closed to visitors since March 22 because of concerns about Covid-19's rapid spread. Keys officials are unsure how long the checkpoints will continue.

Florida Gov. Ron DeSantis said Friday he plans to extend his executive order to travelers coming from Louisiana to Florida to do a mandatory 14-day self-isolation, as New Orleans becomes a potential coronavirus hot spot. The governor said he's suspending vacation rentals in Florida for the next two weeks.

When asked about the order on Friday, Louisiana Gov. John Bel Edwards said DeSantis' order underscores the seriousness of the issue and he was encouraging people in his state to stay at home.

"I've got my hands full here with responding to this crisis and I'm not going to second guess or criticize what other governors are doing or not doing," Edwards said.

Earlier in the week, DeSantis said he would expand his executive order mandating a 14-day self-isolation period for travelers coming to Florida from airports in New York, New Jersey and Connecticut.

Other states move to restrict travel

In Kentucky, Gov. Andy Beshear said Friday he is considering closing the border between Kentucky and Tennessee to stop the spread of Covid-19. Kentucky has reported more than 302 cases and seven deaths and Tennessee has reported 1,203 cases with six deaths as of Friday evening.

The governor said he would have to look at what it would take to shut the border.

In New Mexico, Gov. Lujan Grisham on Friday ordered that everyone traveling by air into New Mexico self-quarantine for 14 days immediately upon arrival. Under the state's emergency order, people will only be allowed to leave quarantine for medical care.

Any travelers who fail to voluntarily quarantine will be subject to "forced isolation or quarantine by the New Mexico Health Department," according to the order.

In Kansas, the government said any travelers from Colorado and Louisiana must self-quarantine when they arrive in the state.