Richard Burr to step down as Intelligence Committee chairman 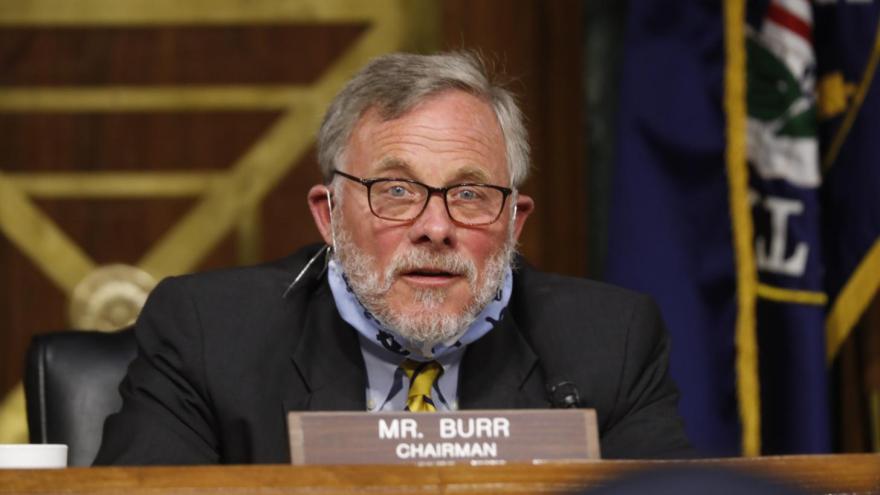 Chairman Richard Burr gives opening remarks at a Senate Intelligence Committee hearing for a nomination hearing for Rep. John Ratcliffe, R-Texas, on May 5, 2020 in Washington, DC. He has announced he will step down.

(CNN) -- Republican Sen. Richard Burr of North Carolina is stepping aside as chairman of the influential Senate Intelligence Committee while he's under investigation for stock trades he made ahead of the market downturn sparked by the coronavirus pandemic.

Senate Majority Leader Mitch McConnell said in a statement Thursday that Burr "contacted me this morning to inform me of his decision to step aside as Chairman of the Intelligence Committee during the pendency of the investigation." McConnell said Burr's resignation as chairman will be effective at the end of the day on Friday.

Burr's decision to step down as chairman is a stunning development for the North Carolina Republican, who has led the Senate Intelligence Committee through its three-year investigation into Russian election interference that's nearing completion and affirmed the intelligence community's conclusion Russia was trying to help President Donald Trump's candidacy.

Shortly after McConnell's announcement, Burr told reporters he was resigning as intelligence chair because "this is a distraction to the hard work of the committee and the members and I think the security of the country is too important to have any distractions."

Burr said he has been cooperating with investigators "since the beginning" and will let the investigation play out. Burr has given no thought to resigning from the Senate, he said, and he does not believe he exercised poor judgment with his stock trades. He'll remain a member of the Intelligence Committee.

McConnell did not announce who would replace Burr atop the Intelligence Committee. Senate Majority Whip John Thune said Florida GOP Sen. Marco Rubio, a member of the panel, was likely to become interim chairman. Senate Foreign Relations Chairman Jim Risch of Idaho is next in line in seniority, but Thune said he "doubts" Risch wants to give that post up.

Thune said Burr "did what he thought was in the best interest of the conference," but he added that Burr deserves his day in court.

Virginia Sen. Mark Warner, the committee's top Democrat, declined to comment on Burr's resignation but said he "got a heads up from him."

Burr said he explained his decision to the Senate Republican conference at its closed-door lunch Thursday that he did not want to be a distraction.

"He was supported," said Sen. Mike Rounds of South Dakota.

Burr sold up to $1.7 million in stocks on single day

Burr came under fire in March when it was first disclosed that he and his wife made nearly three dozen stock trades worth between $628,000 and $1.7 million on a single day, February 13, according to Senate filings, representing a significant portion of his stock portfolio.

As chairman of the Senate Intelligence Committee, Burr has received classified briefings on the coronavirus outbreak in addition to closed-door briefings all senators had access to as the virus spread.

Burr has said that he made the trades using only publicly available information, not classified briefings. But he asked the Senate Ethics Committee to review the sales in March.

Congress passed the Stock Act in 2012, which explicitly made it illegal for members of Congress to trade stocks with inside information. There's no public evidence that Burr broke the law or violated Senate rules with the trades.

In addition to the trades Burr made on February 13, the senator's brother-in-law, Gerald Fauth, sold six stocks worth between $97,000 and $280,000 on the same day as Burr. Fauth is a member of the National Mediation Board, which deals with aviation and rail commerce.

Burr's attorney, Alice Fisher, said last week that Burr did not coordinate his trades with Fauth. She did not respond to requests for comment about the search warrant.

Burr is one of several senators who were scrutinized for their trades made in January and February before the market tanked after the Covid-19 pandemic wreaked havoc on the economy and forced businesses to shutter. CNN reported in March that the FBI and Securities and Exchange Commission had contacted Burr as part of a review of lawmakers' trades.

Sen. Dianne Feinstein, a California Democrat, was contacted by the FBI about sales her husband made in a biotech company in January and March, her spokesman said. Feinstein, who has said publicly she had no involvement her husband's stock trades, was asked basic questions by law enforcement about the transactions and provided additional documentation to show she was not involved, according to her spokesman.

Sen. Kelly Loeffler, a Georgia Republican who was appointed to her Senate seat late last year, also faced public scrutiny for trades she and her husband, New York Stock Exchange chairman Jeffrey Sprecher, made in January and February. Loeffler, who is up for reelection this year, said she had no involvement in the trades made by a financial adviser. She and her husband announced in April they were selling their individual stocks so they would not be a distraction amid the pandemic.

CNN has reached out to Loeffler's office for comment. A spokesperson for the Georgia senator told The Washington Post, "No search warrant has been served on Sen Loeffler. She has followed both the letter and spirit of the law and will continue to do so."

When Burr's trades were made public it March, there were calls for the North Carolina Republican to resign not just from watchdog groups, but also conservative allies of the President, such as Rep. Matt Gaetz of Florida. Trump's allies are still unhappy with Burr for issuing a subpoena to Donald Trump Jr. last year as part of the committee's Russia probe. They also take issue with the committee's bipartisan finding that the intelligence community's assessment was sound that Russia was trying to help Trump win in 2016.

Trump told reporters Thursday that he had not yet heard about the news Burr was stepping down. "That's too bad," he said.

Asked Thursday if he thinks he was targeted for his work on the Intelligence Committee, Burr said: "I'm not going to comment on the investigation -- you have to ask them about the investigation."

Republican senators, meanwhile, reacted cautiously to the news of the FBI's search warrant for Burr, saying that the investigation had to play out.

"He's entitled to the presumption of innocence just like anybody else, and I know he's asked the Ethics Committee to conduct an investigation as well. So, the best I can tell he is trying to do the right thing by the Senate," said Sen. John Cornyn, a Texas Republican in Senate leadership.

Burr's fellow North Carolina Republican Sen. Thom Tillis, who is up for reelection in 2020, declined to weigh in on whether Burr should remain chairman in a radio interview Thursday before Burr stepped down.

"I do believe as I said before he owes us all an explanation and I was well aware of the fact that an investigation is moving forward, we just need to see where the investigation ends," Tillis, said in an interview with conservative radio host Hugh Hewitt.

Burr's trades in March prompted calls for the North Carolina Republican to resign from conservative allies of the President, such as Rep. Matt Gaetz of Florida. Trump's allies are still unhappy with Burr for issuing a subpoena to Donald Trump Jr. last year as part of the committee's Russia probe.

Senate Republican conference rules state that chairs should step down if they are indicted, but the rules do not make reference to senators who are under investigation.

Sen. Bob Menendez, a New Jersey Democrat, stepped down as ranking member of the Senate Foreign Relations Committee in 2015 after he was indicted. He returned to that post in 2018 after the Justice Department dropped the corruption charges against him.

Menendez, informed by a reporter that Burr was stepping aside, told reporters Thursday Burr made a "good decision" at this point, that the "proper" call was to step aside as Intelligence chair.

The Senate's top Democrat, Chuck Schumer, said on CNBC Thursday that it was "premature" for him to comment on the investigation into Burr.

"I don't own any stocks. I've told my colleagues in the Senate at the very least it creates the appearance of a conflict, so it's better not to own any. But I cannot comment on Burr until I know the details," Schumer said.

This story has been updated to include additional background information and reaction.