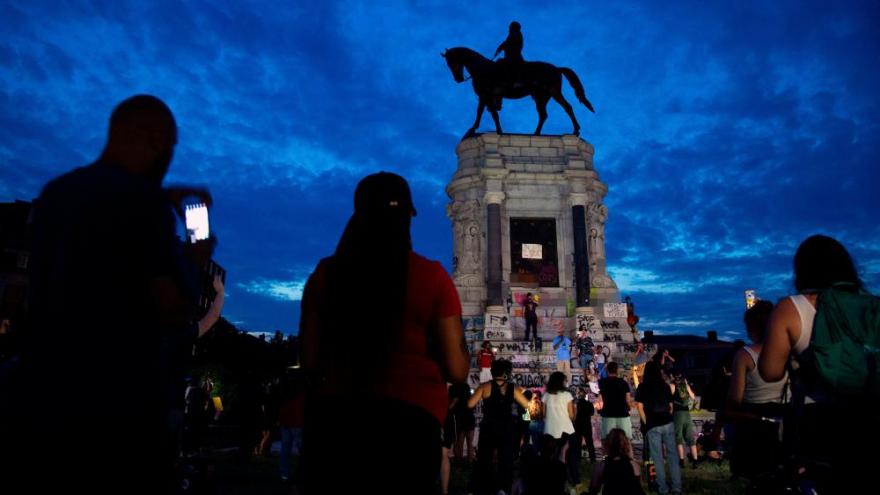 Robert E. Lee statue in Richmond, Virginia seen here on June 4, 202 amid continued George Floyd protests. A judge has temporarily blocked the removal of the statue, days after VA governor announced plans to take it down.

(CNN) -- A judge in Richmond, Virginia, has temporarily blocked the removal of a statue of Confederate Gen. Robert E. Lee from the city's historic Monument Avenue, days after Virginia Gov. Ralph Northam announced plans to take down the statue.

A county circuit judge on Monday granted a 10-day injunction sought by Virginia resident William C. Gregory, saying there is a likelihood of "irreparable harm" to the statue if it is removed.

The judge also wrote that it would be within "the public interest" to "await resolution of this case on the merits prior to removal of the statue by defendants, and the public interest weighs in favor of maintaining the status quo."

In his complaint filed Monday, Gregory argues that removal of the statue violates a 1890 deed, in which Virginia, having been transferred the land the statue sits on, agreed to "faithfully guard and affectionately protect it."

Gregory is identified as the great-grandson of two parties and signatories to the deed.

A spokesperson for Northam said the administration was still reviewing the order.

"Governor Northam remains committed to removing this divisive symbol from Virginia's capital city, and we're confident in his authority to do so," Alena Yarmosky said in a statement provided to CNN.

Last Thursday, Northam said that the state owns the statue and the land under it.

"That was another part of the plan to keep it up forever. It sits on a 100-foot circle of land, a state-owned island, surrounded by the City of Richmond," he said.

Amid nationwide protests over the death of George Floyd, Northam said Thursday that the statue of Lee would come down "immediately" and be moved into storage as they "work with the community to determine its future."

Statues memorializing Confederate generals and soldiers have been the subject of an intense national debate in recent years, with opponents of them saying they wrongly honor long-deceased supporters of slavery. Those who defend preserving the statues, including some historians, argue they shouldn't be destroyed because they can impart important lessons about the ugliness of the past.

The current conversation about racism in the United States -- largely sparked by the deaths of Floyd, Ahmaud Arbery and Breonna Taylor -- is leading to the removal of contentious statues that have riled some residents for decades.

According to Northam, Virginia is "home to more Confederate commemorations than any other state."

CNN reported last week that protesters in Richmond had attempted to pull down the statues on Monument Avenue, which police warned was dangerous. Other statues on the avenue honoring Confederate leaders include J.E.B. Stuart, Jefferson Davis and Stonewall Jackson, with the Lee statue being the most prominent.

Protesters on Saturday toppled a statue of Confederate Gen. Williams Carter Wickham from its pedestal in Monroe Park, according to The Richmond Times-Dispatch.

Last week, the city of Fredericksburg, Virginia, removed an 800-pound slave auction block from its downtown corner, and Alexandria, Virginia, took down a statue honoring Confederate soldiers in its Old Town neighborhood.

In 2017, white nationalists marched in opposition to the removal of a statue of Lee in Charlottesville, Virginia, which led to violent clashes with counterprotesters and the death of counterprotester.