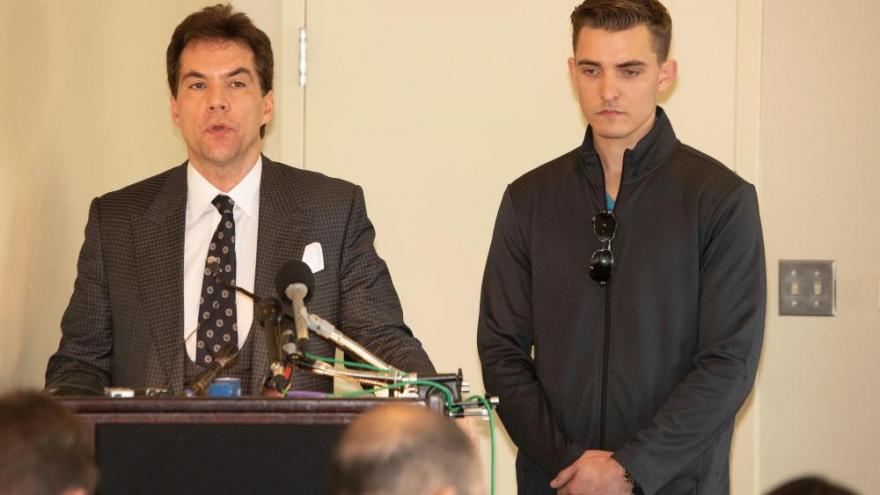 Jack Burkman and Jacob Wohl speak to the media in 2018 in Rosslyn, Virginia.

(CNN) -- Two right-wing political operatives accused of orchestrating robocalls aimed at deterring voters in Detroit and other major cities from casting their ballots by mail were arraigned Wednesday on voter intimidation charges, according to Michigan Attorney General Dana Nessel.

Both men turned themselves in to Detroit law enforcement early Thursday morning, according to a news release and appeared for their court appearance virtually from the Detroit Detention Center.

"The Attorney General's office alleges that Burkman and Wohl attempted to deter electors from participating in the November election by creating and funding a robocall targeted at certain area codes, including Detroit and other major U.S. cities with significant minority populations," Nessel said in a release ahead of the court proceeding. "It's believed around 85,000 robocalls were made nationally, though an exact breakdown of the numbers of calls made to each city or state is not available."

Assistant Attorney General Richard Cunningham alleged in court proceedings that Burkman and Wohl are behind a "racially insensitive robocall" that falsely claimed to callers if they vote by mail they will be placed in a database that will be used to track down people with outstanding warrants, used by creditors to collect debts, and by US Centers for Disease Control and Prevention to make people get vaccinated.

The voice on the robocall said it was sponsored by a group founded by Burkman and Wohl, who have spent years perpetrating hoaxes and false smears against Democratic politicians and opponents of President Donald Trump.

"It's the protection of the public we are most concerned about. The protection and the integrity of the election process and using unfair tactics to try to affect the outcome of the election. That's an extremely serious matter and I hope the court will recognize it as being such," Cunningham said Thursday during the arraignment after asking for $1 million bail, which was not granted.

Wohl, during an interview with CNN in August, denied that he or Burkman was responsible for the misleading and racist calls, and said they had learned about them only after Burkman started receiving angry messages from people who saw his number on their caller ID.

Although both Burkman's attorney, Scott Grabel, and Wohl's attorney, William Amadeo, entered not guilty pleas and argued their clients were simply exercising their First Amendment rights, Magistrate Joseph Boyer set the bond at $100,000 cash or surety each, according to court proceedings.

Terms of the bond include that the defendants "will not initiate or cause anyone else to initiate any robocalls or other communications directed at multiple recipients until November 4, 2020," Boyer said.

"Given the allegation and the nature of the allegations involve potential harm to one of the most fundamental elements of American society, the court is very concerned about that," he said.