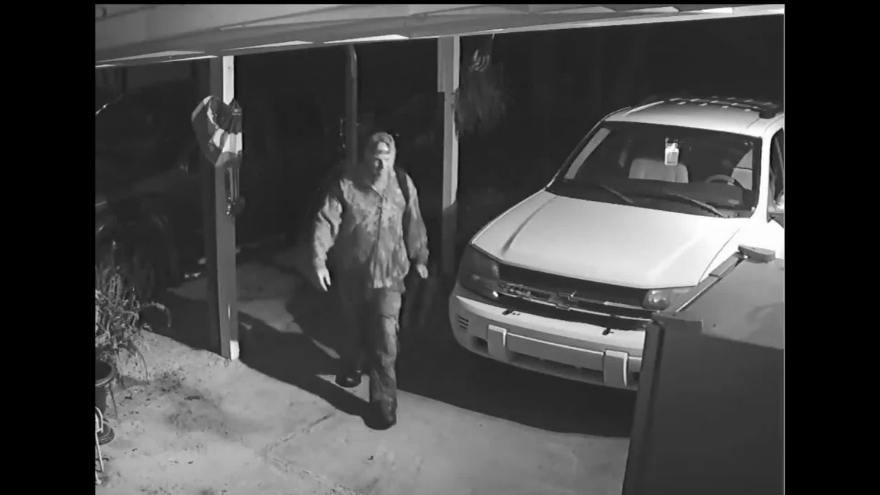 (CNN) -- Curtis Watson had been on the run for more than four days when he was captured Sunday after escaping from the West Tennessee State Penitentiary in Henning, about 45 miles northeast of Memphis.

Officials discovered that he had escaped after finding the body of Debra Johnson, a longtime Tennessee Department of Corrections employee, in her home on prison grounds Wednesday.

Authorities believe Watson killed Johnson while he was supposed to be on mowing duty before escaping from custody.

By Saturday, a $57,000 reward had been offered for information leading to Watson's capture and conviction, the Tennessee Bureau of Investigation said.

The manhunt, which generated more than 430 tips and involved at least 400 law enforcement personnel from multiple agencies,came to an end only 10 miles from the prison.

A surveillance system leads to capture

Watson was captured coming out of a soy bean field after a couple notified police after seeing him on their Ring surveillance camera, David Rausch, director of the Tennessee Bureau of Investigation, told reporters during a news conference Sunday.

Harvey and Ann Taylor said during the news conference that they awoke to an alert from their surveillance system around 3:30 a.m. and saw a man on their property near the entrance of their home.

The couple told reporters Watson was trying to hide inside a refrigerator under their carport.

Harvey Taylor said that when his wife saw the man's face and recognized his beard she said, "That's him! That's him!"

The two said after they called 911 they prepared themselves for the possibility that Watson could try to come inside their house, grabbing their own weapon for protection.

"I was frightened at first," Harvey Taylor said. "When we recognized who it was it heightened that fright."

But search teams arrived on the scene within minutes, Rausch said.

The couple says they never thought they'd be the ones to help bring Watson to justice but they're glad they did.

"With God's help, they got him," Harvey Taylor said. "Our community should be relieved that he's back in custody."

Closing in on the suspect

Rausch said hundreds of law enforcement officials flooded the area and Watson had nowhere to go.

Watson walked out of the field with his hands up, got on his knees and surrendered to law enforcement without incident, Rausch said.

The officers that took him into custody were two women from the Tennessee Department of Corrections. TDOC Commissioner Tony Parker identified the officers as Ashley Bird, a correctional officer and Jessica Brown, a probation parole officer.

They declined to speak during the news conference but Parker applauded their work in capturing Watson, who was taken to be treated at a hospital after he was found. He was covered in mosquito bites and had several ticks that had to be removed, according to Rausch.

When he was captured, Watson expressed relief that the run was over and said he knew he wouldn't get away because of how many law enforcement officials were after him, Rausch said.

Officials are looking into the death penalty

Prosecutors are looking into the possibility of the death penalty for Watson, who faces charges of first degree murder, aggravated sexual battery, specially aggravated burglary, and escape, according to District Attorney Mark Davidson for the 25th Judicial District.

Watson's arraignment will happen sometime this week in Lauderdale County, he said.

"Our office will be resolved to see that he is put back where he can never escape again and harm anybody in our communities," Davidson said.

Watson was serving his second prison stint when he escaped, officials said. He previously was in prison for aggravated child abuse and was released in 2011. He returned in 2013 to serve a 15-year sentence for aggravated kidnapping.

Parker said Watson had no disciplinary issues since 2007 and was a minimal custody offender.

Johnson, who had more than 38 years of service with the corrections department, was supposed to meet with the prison's warden around 8 a.m. on the day she was found dead in her home on prison property.

Investigators found evidence of a struggle and Watson was officially named as the suspect in her death on Thursday.

"I had never met anyone who was more professional, more dedicated to the mission of the Tennessee Department of Corrections than Debra Johnson," Parker said.

He said Johnson's body received a law enforcement escort from Memphis to the funeral home in Nashville and that there are more plans to honor her. Johnson began her career with the Tennessee Department of Corrections in 1981 and served in multiple positions including as an officer and warden. Most recently, she was a correctional administrator.

Parker told reporters that Johnson's family remembered her dedication to the job.

"They recognize that Debra Johnson had a love for the work she'd done," Parker said.