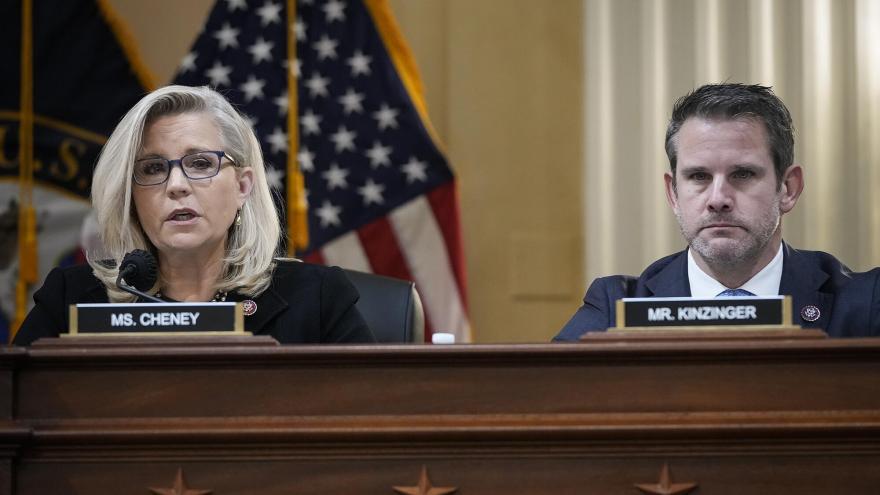 (CNN) -- Republican National Committee members voted Friday to formally censure GOP Reps. Liz Cheney of Wyoming and Adam Kinzinger of Illinois for their involvement with the House investigation into the January 6, 2021, attack on the US Capitol.

The unprecedented move marks the first time the national party has rebuked an incumbent congressional Republican -- much less two -- with a formal censure backed by its members. Prior to its passage, RNC members pushed to have the resolution watered down to remove language calling for Cheney and Kinzinger's expulsion from the House GOP Conference -- a strictly symbolic measure given that the party does not have the authority to decide who does or does not serve in Congress.

Cheney and Kinzinger have both played active roles in the House select committee's probe of former President Donald Trump's activities before and during the riot at the Capitol last January. Their status as the lone Republicans on the panel has drawn scorn from fellow GOP lawmakers and party officials who believe they are enabling an unfair investigation led by congressional Democrats.

"This is not about dissenting views. This is about them helping [House Speaker] Nancy Pelosi," said David Bossie, a Trump ally and national committeeman from Maryland, who drafted the original resolution seeking to oust Cheney and Kinzinger from the GOP caucus.

In a statement ahead of the resolution's passage, Cheney said the punitive measure marked "a sad day for the party of Lincoln."

"If the price of being willing to tell the truth and get to the bottom of what happened on January 6 and make sure that those who are responsible are held accountable is a censure, then I am absolutely going to continue to stand up for what I knew was right," she said.

Several Republicans, including Utah Sen. Mitt Romney, the 2012 presidential nominee, have criticized the motion to censure Cheney and Kinzinger, who were among 10 House GOP lawmakers who voted to impeach Trump last year for his role in inciting the Capitol riot. .

"Shame falls on a party that would censure persons of conscience, who seek truth in the face of vitriol. Honor attaches to Liz Cheney and Adam Kinzinger for seeking truth even when doing so comes at great personal cost," Romney said in a tweet a few hours before Friday's vote.

This story has been updated with additional details about the RNC vote on Friday.