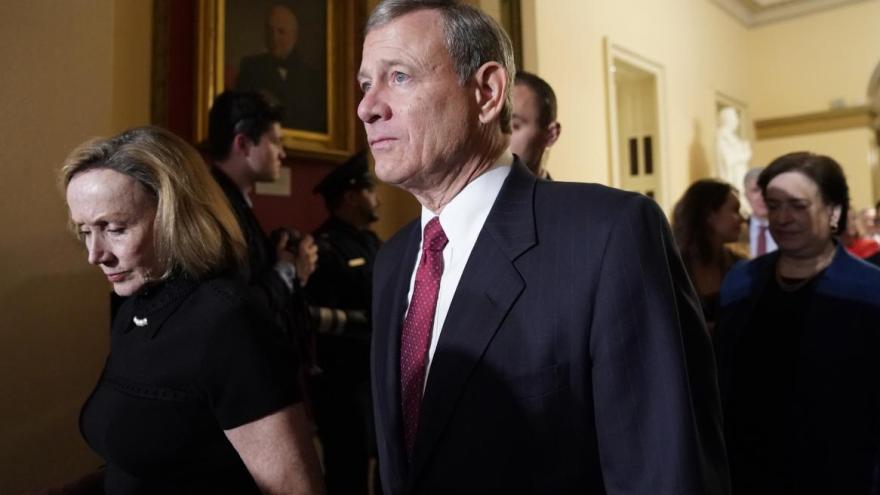 U.S. Supreme Court Chief Justice John Roberts departs with his wife Jane after U.S. President Donald Trump concluded his second State of the Union address to a joint session of the U.S. Congress in the House Chamber of the U.S. Capitol in Washington, U.S. February 5, 2019.

(CNN) -- Chief Justice John Roberts on Monday cleared the way for Indiana to attempt to implement a law that restricts a minor's access to abortion.

In a procedural order, Roberts granted a request from Indiana to bypass normal procedures and quickly transmit the court's opinion from June overturning Roe v. Wade to a federal appeals court so that the state can attempt to put in place its strict parental notification law that had been blocked.

Indiana had sent its request to Justice Amy Coney Barrett, but she took no part in the case presumably because she was sitting on the Chicago-based federal appeals court when the case was initially before it. As a result, the application was handled by Roberts.

Planned Parenthood of Indiana and Kentucky had said it would not object to expediting the judgment.

At issue in the dispute is a state law that requires parents to be notified if a minor seeks an abortion, unless a court finds that the notification is not in the best interest of the child. Lower courts -- citing Supreme Court precedent -- had invalidated the law and Indiana asked the Supreme Court to step in back in March 2021. But the justices sat on Indiana's petition for months while the court contemplated Dobbs v. Jackson. Once it decided Dobbs and reversed Roe v. Wade, it sent a handful of pending abortion related petitions back down to the lower courts with instructions to revisit their earlier decisions.

But Indiana, eager to return to the lower courts, asked the court to move quickly to officially notify the lower courts of its decision, bypassing the normal 30 day timeframe.

On Monday, Roberts agreed to do so.

More than half the states are expected to bar or severely restrict abortion. Thirteen states have laws in place that are designed to be "triggered" and take effect if Roe no longer applies. In some states those laws have gone into effect, but others such as Texas, Idaho and Tennessee will wait for the Supreme Court mandate to officially come down. Those states have not yet asked the justices to expedite its judgment.