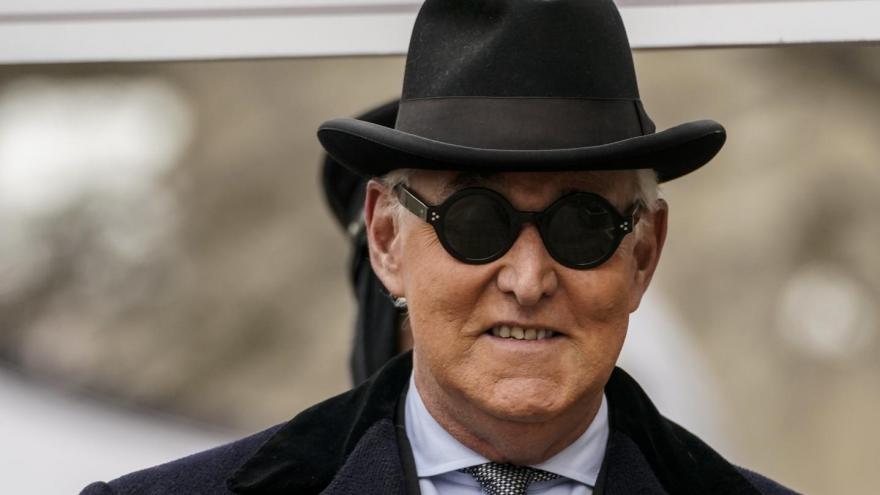 (CNN) -- Roger Stone does not deserve a retrial, a federal judge ruled on Thursday, after the longtime friend of President Donald Trump had attempted to claim jury misconduct.

Judge Amy Berman Jackson of the US District Court in DC ruled Stone's jury forewoman had not lied to the court about her opinions when she was screened for bias before the trial, as Stone alleged. Instead, Jackson said Stone's legal team failed to fully research and question her.

The judge's 81-page, extensively detailed opinion is the latest high-profile debunking of a Trump-backed conspiracy theory -- and one that's likely to unleash another right-wing political furor about the court and justice system.

After Stone's conviction, for lying to Congress about his efforts for the 2016 Trump campaign, the President and his allies claimed the jury was tainted, the foreperson was biased and the verdict was therefore void. But Jackson's ruling, and all of her factual findings, showed otherwise, setting up Stone to serve his sentence, absent a presidential pardon or successful appeal.

Still, the ruling on Thursday is unlikely to put to rest criticism of the jury from Stone supporters. The court is still weighing whether to release more details about the jurors. And the gag order the judge had placed on Stone, which had prevented him from making media appearances criticizing his case and spreading the President's attacks against the Mueller investigation, is now lifted.

"We are very disappointed by the ruling. We have no further comment at this time," Stone's attorney Grant Smith said Thursday.

Trump also weighed in on the ruling late Friday, responding to a tweet that claimed the process was "rigged" by calling it "a disgraceful situation."

The jury forewoman, Tomeka Hart, had identified herself publicly just before Stone's sentencing in February, when she wrote on Facebook that she applauded the work of the prosecutors on the case. She had also posted on social media before the trial about Trump and his supporters, calling them racist.

Stone's legal team called it juror misconduct that Hart didn't disclose her social media post specifics or political opinions on a written questionnaire at the start of the trial.

The judge on Thursday, however, called Stone's request to throw out the verdict a "tower of indignation." Jackson undercut Stone's argument that because the jury forewoman had posted negatively about the President on her social media, she felt the same about Stone.

"At bottom, the defense merely posits that if you do not like Donald Trump, you must not like Roger Stone, or if you are concerned about racism on the part of some of the President's supporters, then you must be applying that label to Roger Stone because he was a supporter, too," Jackson wrote in the opinion. "While the social media communications may suggest that the juror has strong opinions about certain people or issues, they do not reveal that she had an opinion about Roger Stone, which is the opinion that matters."

Jackson noted that Stone's legal team had never asked Hart follow-up questions about her social media or political preferences when they questioned her during jury selection.

Stone's team had even employed jury consultants, but none Googled Hart before the trial.

"An effort to uncover social media activity would not have required the lawyers to pore over dusty family court records in the basement of a county courthouse. All they had to do was sit and type her name into an internet search engine on a laptop -- a rudimentary practice that has been an inexpensive and popular arrow in the trial practitioner's quiver for quite some time," Jackson wrote.

The judge added that she had found the forewoman "warm, open and frank" and "extremely credible" in her jury selection interview under oath.

Stone could appeal over the next two weeks, but may be ordered to report to prison to serve his 40 months -- at earliest, two weeks from now. The growing coronavirus epidemic inside the prison system wasn't mentioned by the judge in his case. The probation office will tell Stone when he must report.

Under the gag order, Stone was not allowed to post on some social media sites or to comment about special counsel Robert Mueller's investigation or his own court case.

Jackson's decision sends the case into a new phase -- of appeals, preparations for Stone to report to prison and potential blowback from Trump and even Stone himself.

Stone had asked for a new trial in February, just days before his sentencing.

Two months ago, the Stone sentencing had led to a near-crisis within the justice system. Stone's case consumed much of Trump's furor and the Justice Department's public messaging in February, after the attorney general softened the department's stance toward Stone's crimes and the President and others railed against the career prosecutors, judge and jurors.

The prosecutors who took Stone to trial quit in protest of political appointees' interference in the case, and Jackson countered that Trump's and the Stone team's harassment of jurors could hurt the court system.

Stone's circle had directed much of their anger at Hart, the jury forewoman.

The Justice Department had told the court that Stone didn't deserve another trial, and jurors even testified in court about the integrity of their deliberations.

This week, all 12 jurors wrote to the court asking to keep their names private because they fear being harassed for their service on the case.

Hart and another juror, Seth Cousins, who also identified himself to the media after the trial, said they've received threatening letters and postcards from strangers -- a veiled threat that implies their home addresses are known.

The question now is whether Stone will do time in prison.

Jackson sentenced him to 40 months for lying to Congress to cover up for Trump's interest in getting stolen documents that could help his 2016 campaign.

Last fall, a jury in DC found the self-proclaimed political dirty trickster guilty on all seven counts of obstruction, lying to Congress and using threats to pressure a witness, his longtime acquaintance Randy Credico, to also lie.

Stone's friends have lobbied for a presidential pardon. Trump said on the day of Stone's sentencing that he wanted the legal process to play out before he decided whether to pardon his friend.

Stone had asked for a new trial once before, also claiming a juror was biased. Jackson found his reasoning weak and refused the do-over.

He also unsuccessfully tried to remove Jackson from the case, accusing her of bias for saying at his sentencing that jurors "served with integrity."

In her opinion Thursday, Jackson reminded Stone's team that the appeals court above her, the DC Circuit, generally leaves decisions to grant new trials with the trial-level judge -- making it clear Stone's chances for a successful appeal are low.