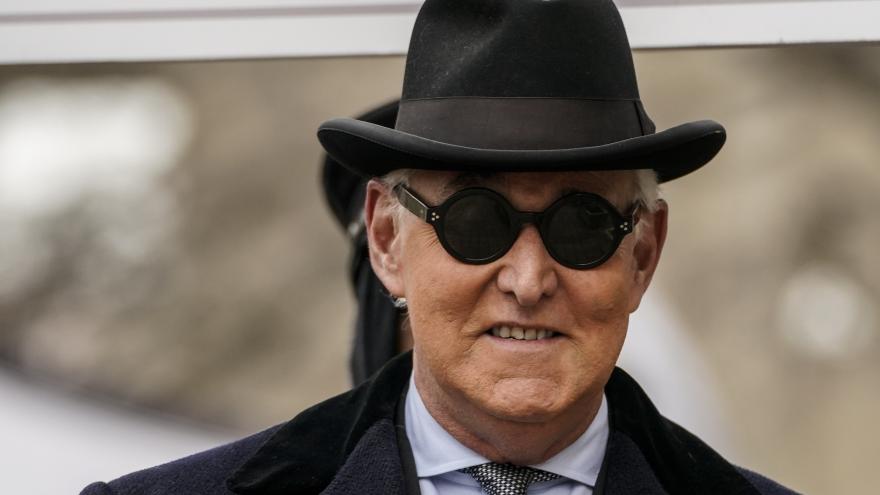 (CNN) -- Roger Stone does not deserve a retrial, a federal judge ruled on Thursday, after the longtime friend of President Donald Trump had attempted to claim jury misconduct.

Stone is able to appeal over the next two weeks, but may be ordered to report to prison to serve his 40 months -- at earliest, two weeks from now.

The gag order the judge had placed on him is also lifted, according to the court Thursday.

Judge Amy Berman Jackson's decision sends the case into a new phase -- of appeals, preparations for Stone to report to prison and potential blowback from Trump and even Stone himself.

Stone had asked for a new trial in February, just days before his sentencing.

"We are very disappointed by the ruling. We have no further comment at this time," Stone's attorney Grant Smith said Thursday.

Two months ago, the Stone sentencing had led to a near-crisis within the justice system. Stone consumed much of Trump's furor and the Justice Department's public messaging in February, after the attorney general softened the department's stance toward Stone's crimes and the President and others railed against the career prosecutors, judge and jurors.

The prosecutors who took Stone to trial quit in protest of political appointees' interference in the case, and Jackson countered that Trump's and the Stone team's harassment of jurors could hurt the court system.

Stone's circle had directed much of their anger at Tomeka Hart, the jury forewoman. Just before the sentencing, she wrote on Facebook that she applauded the work of the prosecutors on the case. She had also posted on social media before the trial about Trump and his supporters, calling them racist.

Stone's legal team called it juror misconduct that Hart didn't disclose her social media specifics or political opinions on a written questionnaire at the start of the trial.

The Justice Department had told the court Stone didn't deserve another trial, and jurors even testified in court about the integrity of their deliberations.

The question now is whether Stone will do time in prison.

Jackson sentenced him to 40 months for lying to Congress to cover up for Trump's interest in getting stolen documents that could help his 2016 campaign.

Stone hasn't gone to prison yet because the retrial possibility was hanging over his case.

His legal team has said they'd appeal. Stone isn't set to report to prison at least for two weeks, according to the court record.

Last fall, a jury in DC found the self-proclaimed political dirty trickster guilty on all seven counts of obstruction, lying to Congress and using threats to pressure a witness, his longtime acquaintance Randy Credico, to also lie.

Stone's friends have lobbied for a presidential pardon. Trump said on the day of Stone's sentencing that he wanted the legal process to play out before he decided whether to pardon his friend.

Stone had asked for a new trial once before, also claiming a juror was biased. Jackson found his reasoning weak and refused the do-over.

He also unsuccessfully tried to remove Jackson from the case, accusing her of bias for saying at his sentencing that jurors "served with integrity."