Roger Stone to be sentenced Thursday despite controversy, judge says 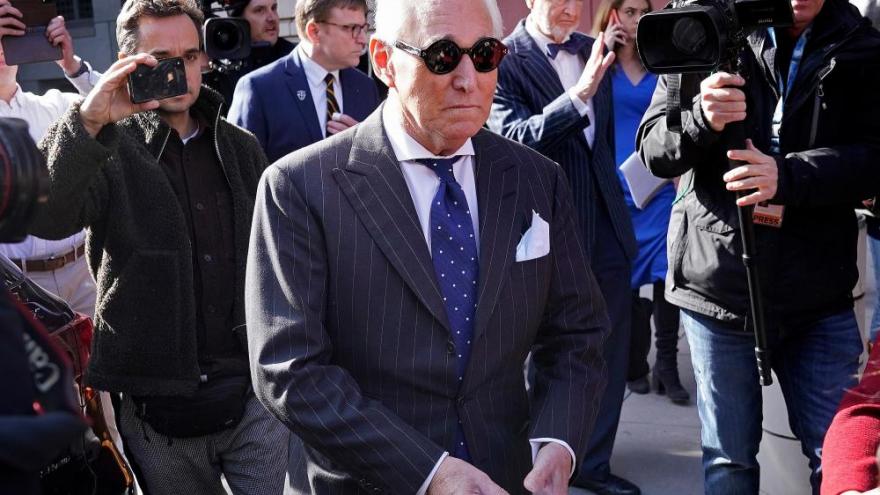 Judge Amy Berman Jackson will hear from Roger Stone's defense team and the Justice Department after a tumultuous week that saw President Donald Trump suggest she is biased and several prosecutors quit his case after Justice Department leadership rescinded their initial recommended sentence of up to nine years in prison.

Judge Amy Berman Jackson says she'll consider his latest request for a new trial on a different schedule and will give him time to appeal after she makes her sentencing judgment.

Jackson didn't comment at the 15-minute hearing on the prosecutor withdrawals or political furor over the case.

Stone was convicted last year on seven charges of obstruction, lying to Congress and witness tampering, but has asked for a new trial.

Jackson has been silent on recent developments in the case since the prosecutors quit and since Trump accused her of bias.

"Is this the Judge that put Paul Manafort in SOLITARY CONFINEMENT, something that not even mobster Al Capone had to endure? How did she treat Crooked Hillary Clinton? Just asking!" the President tweeted last week.

Manafort was never held in solitary confinement and Jackson didn't control the conditions of his detainment when she sent him to jail in June 2018.

The hearing came one week after the four prosecutors who took Stone's case to trial argued he should be sentenced to seven to nine years in prison. All four prosecutors withdrew from the case last Tuesday in response to the controversial and politically charged decision by Attorney General William Barr to retract the prosecutors' recommended sentence, which came hours after Trump criticized it on Twitter for being too harsh.

One supervising prosecutor from the DC US Attorney's Office, John Crabb, Jr., stepped up to file the revised Justice Department recommendation -- which takes no position on Stone's deserved prison time, and instead argues it should not be as severe as seven years but is up to the judge.

Since the prosecutor debacle, which has shaken current and former attorneys across the Justice Department, the jury forewoman from Stone's trial publicly defended the four prosecutors. Right-wing commentators then accused her of bias against Trump.

Stone is asking for no prison time. He has already lost one bid for a new trial after he challenged a juror for his or her employment with the IRS and for reading about his case in the news.