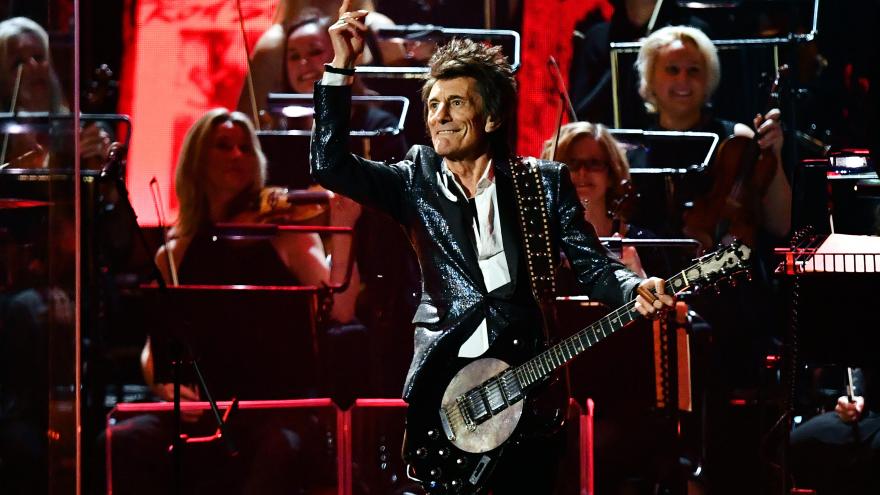 (CNN) -- Rock legend Ronnie Wood says he has been given the all-clear by doctors after battling cancer for a second time.

Speaking to British newspaper the Sun, the 73-year-old Rolling Stones guitarist revealed he was diagnosed with small-cell carcinoma -- a cancer that typically affects the lungs -- during the coronavirus lockdown.

"I had lung cancer in 2017 and I had small-cell more recently that I fought in the last lockdown."

According to the American Cancer Society, small-cell cancer is a highly malignant cancer commonly found within the lungs but can affect areas such as the prostate, pancreas, bladder or lymph nodes. It is a more aggressive form of lung cancer that accounts for about 13% of lung cancer cases.

"I came through with the all-clear," Wood said.

Wood told the Sun that painting his wife Sally Humphreys, 43, and their 4-year-old twins, Gracie and Alice, had helped him through recovery.

He added that the "self-imposed" art therapy allowed him to "express and get lost."

A representative for Wood confirmed the musician's quotes to CNN.

Regarding his recent health scare, the former hell-raiser credited a "higher power" for the positive outcome.

"I'm going through a lot of problems now, but throughout my recovery, you have to let it go," he said. "And when you hand the outcome over to your higher power, that is a magic thing ... What will be will be, it's nothing to do with me. All I can do is stay positive in my attitude, be strong and fight it, and the rest is up to my higher power."

The father-of-six had previously revealed that he received his 2017 diagnosis during a routine checkup after "50 years of chain smoking."

"I had this thought at the back of my mind after I gave up smoking a year ago: 'How can I have got through 50 years of chain-smoking -- and all the rest of my bad habits -- without something going on in there,'" he told the Daily Mail's Event magazine at the time.

Wood decided against chemo out of fear he would lose his full head of hair, but did undergo a five-hour operation to have part of his lung removed. In 2018, he confirmed he was cancer-free.