Root Beer Float in a Cone 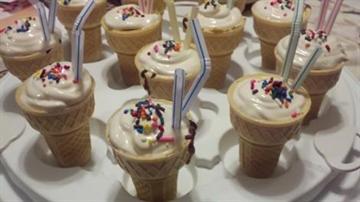 My latest adventure with cupcakes had two catastrophes...but it all turned out well in the end.

My sister and I both have the COOLEST cupcake carriers in the world, we bought them for each other as birthday gifts last year.

Everyone at the station calls it my space ship.  Tease all they want, I do not care, because I love it!  This year, I bought my sister a cupcake cookbook for her birthday, and while I was visiting her this week, we decided to attempt root beer float cupcakes!

This recipe is a variation of yellow cake, but instead of adding water, you add root beer!  You actually bake the cupcakes in ice cream cones, which I will admit, makes the cones taste a little stale, but they were still good!

Catastrophe #1...attempting the root beer icing.  Way too watery!  And, it looked disgusting!

My second attempt at the icing was successful!  So, I piped all the cupcakes with frosting, added sprinkles and the straws and admired my work.

Seconds later, my world came crashing down.  OH MY GOD.  The cones are like dominoes...one falls and they all fall.  It was like watching in slow motion as several of the cones landed on the carpet!  I screamed and ran for the paper towels, vigorously scrubbing the carpet and picking up the lost sprinkles.

After relocating the still intact root beer float cones to the safety of the kitchen counter above the tile, I enjoyed one of the ones that had fallen.  Other than a few extra carpet hairs, it was delicious!  And, the others still looked cute!

Note to self...never try and carry cupcakes in ice cream cones in the space ship, it is the perfect recipe for trouble!