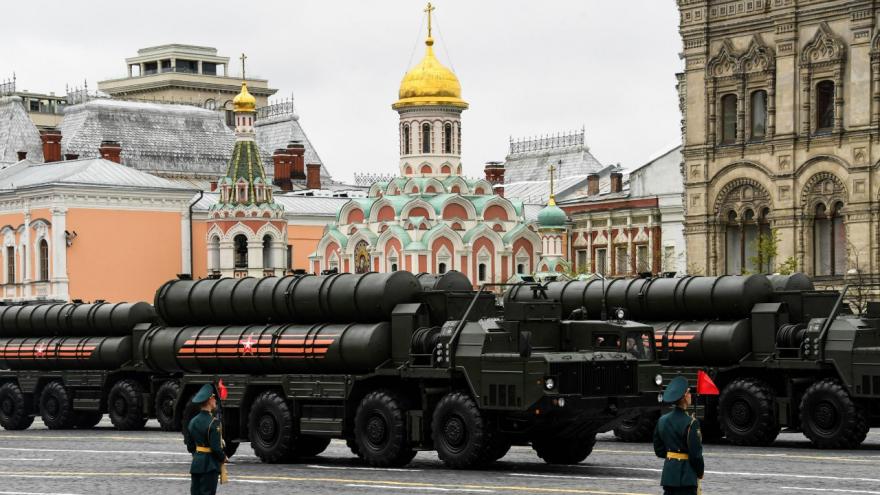 (CNN) -- Russia has announced it is suspending participation in the Intermediate-Range Nuclear Forces treaty -- one day after the US declared it would pull out of the agreement unless Moscow complies with its terms within 180 days.

Russian President Vladimir Putin announced the move on Saturday, according to the Kremlin's official website.

Putin held a special meeting with Foreign Minister Sergey Lavrov and Defense Minister Sergei Shoigu following Friday's decision by the US to suspend compliance with the INF treaty, a key pact with Russia that has been a centerpiece of European security since the Cold War.

"We will proceed as follows. We will have a tit-for-tat response. American partners have announced that they are suspending their participation in the treaty, so we are suspending ours as well," said Putin, according to the website.

"They announced that they are engaged in research & technological development work, and we will do the same."

US President Donald Trump and his senior officials had been signaling for months that they were ready to pull out of the INF treaty, which the US accuses Moscow of violating since 2014. Moscow has consistently rejected those accusations.

And Putin has ordered his ministers not to initiate any negotiations about any possible adjustments to the treaty, stating that from now on Russia refuses to be a broker for salvaging the agreement.

While Putin emphasized that he did not want to start a new arms race, the Russian President also announced his support for a proposal to start construction of a new medium-range supersonic nuclear missile.

The Kremlin website also said Putin agrees with the proposals of the Ministry of Defense to start "grounding" the "Kalibr" missiles and the opening of a new direction -- the creation of a medium-range hypersonic ground-based rocket."

The INF treaty "bans ground-launched missiles with a range between 500 and 5,500 kilometers."

Russian Kalibr missiles are a type of cruise missile that Russian forces launch from ships and submarines. Now Putin is agreeing to allow the development of a land-launched variant.

This new ground launched design would be a direct violation if the treaty was still being observed, but both Washington and Moscow have now suspended compliance.

US officials claim that Russia has not been obeying the treaty. "For years, Russia has violated the terms of the Intermediate-Range Nuclear Forces Treaty without remorse," US Secretary of State Mike Pompeo said. "Russia's violations put millions of Europeans and Americans at greater risk.

"It is our duty to respond appropriately," Pompeo said, adding that the US had provided "ample time" for Russia to return to compliance.

The long-expected suspension has raised concerns about a renewed arms race with Moscow and put European allies on edge. Pompeo's announcement starts the 180-day countdown to complete withdrawal unless Russia returns to compliance with the 1987 agreement.

"We are heading into a direction we have not been in in 40 years: no arms control limits or rules that we are both following, and that is very dangerous," said Lynn Rusten, a senior director for arms control and nonproliferation at the National Security Council during the Obama administration and now a vice president at the Washington DC-based Nuclear Threat Initiative.

In some quarters it is thought that the treaty has allowed China to gain a military advantage, as Beijing is not bound by the INF treaty's limits on intermediate range missiles.

On Saturday, Chinese Foreign Ministry spokesman Geng Shuang released a statement outlining its opposition to the US decision to suspend compliance, saying that it "may trigger a series of adverse consequences."

Geng said the treaty "plays a significant role in easing major-country relations, promoting international and regional peace, and safeguarding global strategic balance and stability" and that China urges "US and Russia to properly resolve differences through constructive dialogue."

The statement from Geng was released Saturday before Russia announced it was also suspending its compliance with the treaty.

When asked if China would agree to a new multilateral treaty on arms control to replace the INF, Geng responded: "The multilateralization of the INF Treaty involves a series of complex issues covering political, military and legal fields, which draws concerns from many countries. China opposes the multilateralization of this treaty. What is imperative at the moment is to uphold and implement the existing treaty instead of creating a new one."